The day Nickelsdorf was overwhelmed | Europe| News and current affairs from around the continent | DW | 14.09.2015

The day Nickelsdorf was overwhelmed

Thousands of refugees arrived from Hungary in Nickelsdorf, Austria on Monday, overwhelming efforts by helpers and relief workers, reports Alison Langley from the town. 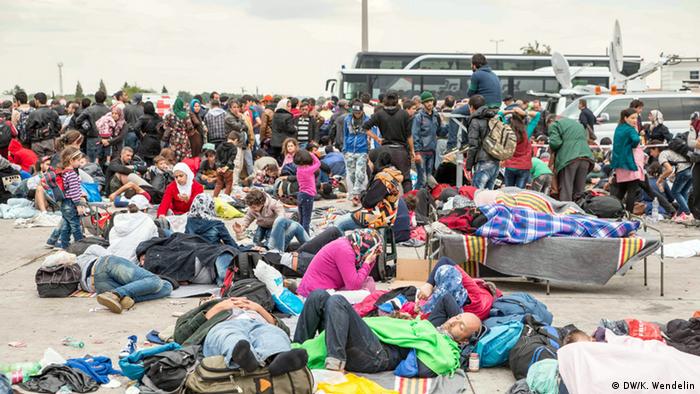 Today is the day Karl Wendelin got choked up. For more than a week, the Austrian had been riding his bike around Nickelsdorf photographing scenes, plateaus of refugees as they straggled into the temporary quarters on the border with Hungary.

But Monday was simply too much. Too many people, too many small toddlers, too many pregnant women, too many people hobbling on crutches, leaning on a spouse, carrying a sleeping baby. Police are at a loss to guess how many, 10,000 perhaps more.

No matter how many bananas the Red Cross volunteers can offer them, it's not enough to make up for the exhaustion that seeped into the bags under their eyes. The sprinkling rain no longer mattered, neither did the oily concrete on the border crossing, where trucks used to stop for customs control. They curled up under blankets and used as a pillow their one plastic sack carrying all their possessions. Families slept puppy style, with a head on a stomach or against a shoulder. Mothers breastfed babies on the concrete floor.

Crowds with nowhere to go 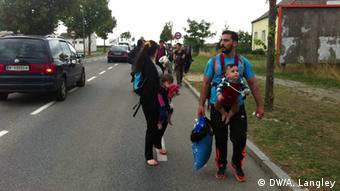 Refugees on the road to nowhere

Thousands arrived in Nickelsdorf Monday. Exact numbers are impossible to estimate because while many families dawdled, eating a bit, letting the kids play a little, finding new clothes to wear because the old ones stink, others kept moving. Their feet bloodied with popped blisters, but their bodies were too tired to feel any pain.

Thousands walked from Hegyeshalom, four kilometers from the border, and kept walking. They passed probably two dozen empty buses lined up orderly in a car park, idle, because the driver has no where to take them.

Just a few minutes earlier, hundreds of refugees stormed through a police barricade, shouting, babies crying, a woman grabbing onto the shirt of the man in front of her to keep her balance. They are stampeding to an empty car park because apparently a bus driving to Vienna was rumored to be arriving.

Thousands of people stretched out along the B10 road for kilometers. Then clumps of more families hiked along an exit to the A4, where groups of young men were sitting in an underpass, keeping dry. Only a few cars rolled passed anyway because of the kilometer long traffic jams, due to reinstituted border checks. 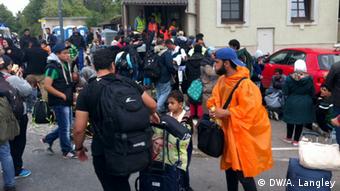 Helpers handed out water and bananas to refugees

Those who walked into Nickelsdorf plopped down by a way station that was serving bananas and tea. Here they leaned against picket fences with large bursting roses peeking through. Behind the gardens were neat houses with clipped lawns that one young father, Raby Abbesi, said he dreamed one day of owning. A car inched slowly passed as a resident tries to park in their driveway.

Others were lucky enough to hail one of the hundreds of taxis that had driven to Nickelsdorf to make a mint. Although their companies were warned against price gouging, cab drivers were demanding €450 (520 dollars) to drive four people to Vienna, instead of the regular 170. An occasional volunteer would simply open a car door and offer anyone a ride for free.

The Mayor of Nickelsdorf, Gerard Zapfl, screamed into his mobile phone. "There's no plan, there's no info, nothing." This is the worst he's seen, he yells.

But Sabah Jalal from Homs, whose house was bombed to rubble, said he's seen a lot worse.

The decision to reintroduce border controls on the Austrian border represents a change of course for Germany in its handling of the refugee crisis. The move raises some painful questions, writes Kersten Knipp. (14.09.2015)

Rail services have resumed between Austria and Germany after all trains were stopped overnight. Berlin has reintroduced border controls to stem the tide of thousands of refugees streaming across its frontier. (14.09.2015)

Borders between Germany and Austria were closed and train services suspended for twelve hours amid a massive refugee crisis. Alison Langley reports from Vienna's central station on the reactions there. (14.09.2015)