Hungarian politician: Use pigs' heads to ward off Muslim migrants

A Hungarian member of the European Parliament has drawn criticism for his proposal to keep migrants away. Gyorgy Schopflin suggested the country use pig heads to scare off Muslim migrants trekking through Europe. 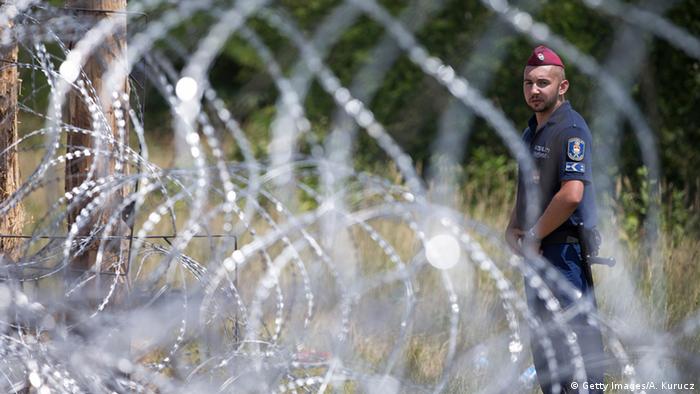 MEP Gyorgy Schopflin's suggestion on Monday followed criticism directed at Hungarians in rural parts of the country who'd been using other methods they hoped would frighten away migrants, such as carved vegetable roots and human-like face masks.

"Human images are haram," the politician reportedly tweeted, using the Arabic term that refers to words or images that are considered heresy in Islam. "But agree, pig's head would deter more effectively." The tweet was apparently later deleted.

Muslims view pork as unclean and the Quran calls on Muslims not to eat it.

The comment drew immediate criticism, including from Human Rights Watch director Andrew Stroehlein. "Your words are disgusting. I would expect that from anonymous neo-Nazi trolls but you're an MEP. Act like one," he posted online, according to the "Independent" newspaper.

In an interview with the Hungarian website mandiner.hu, the MEP said his comment had been blown out of proportion.

"I did not humiliate anyone," Schopflin said. "When I noted in reaction to a raised question that the pig heads would actually be more effective than masks carved from sugar beets, it was a small thought experiment, nothing else."

Hungarian politicians, led by Prime Minister Viktor Orban, have been at odds with German Chancellor Angela Merkel over her refugee policy in the past year. In July, Human Rights Watch reported that Hungarian authorities were using excessive force to prevent migrants from crossing their border.

Inside Europe: Hungary's referendum on migration