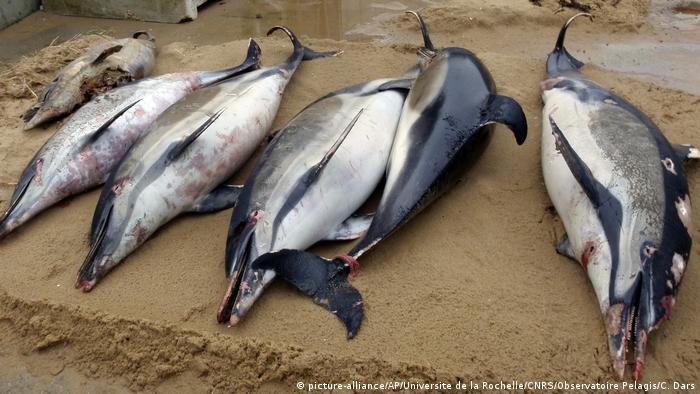 Hundreds of dead dolphins washed up on France's Atlantic coast with many more predicted to come, according to a French monitoring group for marine mammals.

Around 670 dead animals have been found on beaches as of mid-February, according to the conservation group Pelagis. Among the dead were hundreds of protected cetacean species including whales.

Animal welfare activists have said that tightly meshed fishing nets were responsible for their deaths.

"The level of deaths by-catch is not acceptable. This can lead to the extinction of local populations of the species," said European Union Fisheries Commissioner Virginijus Sinkevicius, adding that the figures were "unacceptable."

In a statement, the Commissioner recalled the hundreds of dead dolphins found in 2019 on the beaches of the Bay of Biscay off the coast of south-west France and said that the deaths of the dolphins were "probably" linked to fishing nets.

Pelagis said on Wednesday that the total number of dead animals is likely far greater as many do not wash up on beaches and instead sink to the ocean floor. Many of the animals also appeared to have sustained injuries from fishing equipment and were likely by catch.

Sea Sheperd, a Canadian non-profit for marine conservation,  announced in a statement that fishing associations have a "scandalous attitude" that taints the fishing industry.

The worst affected areas are the coasts of the Bay of Biscay especially the north-western regions of Brittany and Vendee, said University of La Rochelle scientist Matthieu Authier, who also works for Pelagis.

Last year alone, more than 11,000  dead dolphins were found on the French coast.

In January, the French government enacted a plan to protect the dolphins, stating that the use of so-called "pingers" (devices which emit acoustic signals) must be mandatory for certain fishing trawlers during winter.

Sinkevicius has written to the fisheries and environment ministers of the 22 member states, "urging them to work together to find a solution to this situation".

He also asked the International Council for the Exploration of the Sea (ICES), the scientific body which monitors the North Atlantic ecosystems and the level of fish stocks, for "an urgent update of their scientific advice".

The issue, also of high concern in the Celtic Sea and the Baltic Sea, will also be put on the agenda of the forthcoming Councils of EU Fisheries and Environment Ministers, he said.

Germany's porpoises are critically endangered and hundreds are washing up dead. Scientists point the finger mainly at fishing operations. (02.05.2019)

A group of American tourists spotted the whales during a helicopter tour over the west coast of the Nordic island. Although the huge aquatic mammals are notorious for beaching, the sheer number has surprised experts. (20.07.2019)