The visit by the leader of Fridays For Future divided opinion among French politicians. The movement calls on students around the world to protest for more ambitious efforts to fight climate change. 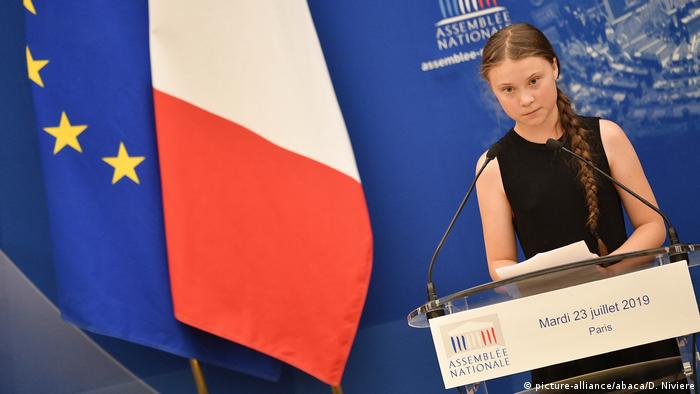 Climate activist Greta Thunberg dismissed her critics during a visit to France's National Assembly on Tuesday.

"Just for quoting or acting on these numbers, these scientific facts, we receive unimaginable amounts of hate and threats. We are being mocked and lied about by members of parliament and journalists," the Fridays for Future leader said.

While members of the Green party and French President Emmanuel Macron's centrist En Marche party celebrated her attendance, some conservative and far-right lawmakers boycotted her speech.

"What we need is scientific progress and political courage," he said.

Julien Aubert, also from Les Republicains, said: "Don't count on me to applaud a prophetess in shorts, a Nobel Prize for Fear."

Thunberg said it was "fine" that her critics decided not to show up to listen to her: "We are, after all, just children!"

The 16-year-old had received her invitation from the "Let's Accelerate" group, a climate change awareness alliance of French MPs.

French State Secretary of Education Gabriel Attal said Thunberg had started a "historical movement" across the world. Thunberg's school strikes against a lack of action on climate change have sparked student protests in over 100 countries.

Thunberg has already attended summits across Europe championing action against climate change, including one where she was accompanied by Arnold Schwarzenegger in Vienna.

Her visit to Paris comes as European temperatures are expected to soar again. Experts say the French capital will see record temperatures on Thursday.

Cologne has become the first German city with a population of more than a million people to join the declaration movement. More than 700 cities around the world have recognized the urgency of the climate crisis. (10.07.2019)