Schwarzenegger teams up with activist Greta Thunberg at climate summit

A top climate summit organized by Arnold Schwarzenegger's environmental organization has opened in Vienna. Swedish youth activist Greta Thunberg spoke at the opening of a failure by the leaders in attendance to act. 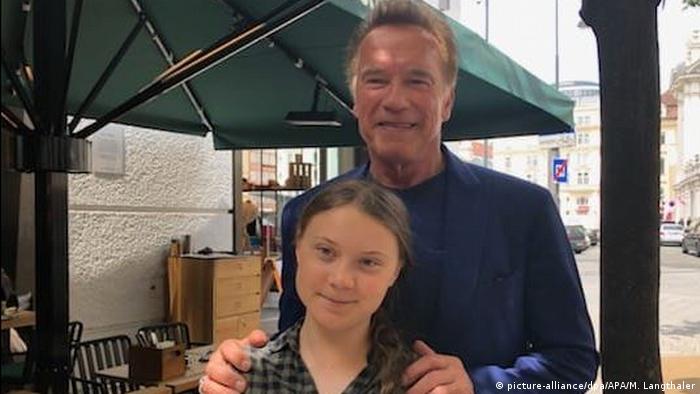 Swedish youth activist Greta Thunberg on Tuesday called on leaders to inform the public about climate change without sugarcoating "the biggest crisis humanity has ever faced."

Most people have no clue about the scale of the climate emergency because they "have not been told, or more importantly, told by the right people," said Thunberg, who has inspired millions of young people across the globe to participate in the Fridays for the Future school strikes.

People listen to, and are influenced by, politicians, celebrities, CEOs and journalists, giving them enormous responsibility, she told a top climate summit in the Austrian capital Vienna.

"And let's be honest, this is a responsibility most of you have failed to take," she told the high-level crowd. "We are humans… We are a part of nature. We are social animals. We are naturally drawn to our leaders."

"You cannot rely on people reading between the lines or searching for the information themselves" about detailed climate change issues, Thunberg said, calling for a complete change in the way society deals with the issue.

The climate crisis is an emergency, and should be treated as such, not discussed as a way to generate green jobs and economic growth, she said.

Schwarzenegger praised Thunberg as a dreamer who had created a grassroots youth movement to hold those in power accountable for their pledges to roll back climate change.

"If we fail to act it is their future at stake, not ours. Their vision should lead us to action," Schwarzenegger said.

The R20 Austrian World Summit brings together top officials, businesses, investors, civil society and climate experts as well as representatives of regions and cities from around the world, to promote and implement the Paris Climate Agreement and the United Nations Sustainable Development Goals.

"Scenes from the Heart" is a memoir about Greta Thunberg and her family before she gained fame. Now available in German, the young climate activist's story will come out later this year in English. (03.05.2019)

The teenage climate activist and the leader of the world's Catholics agree that the world needs to fight climate change. Pope Francis gave his blessing for Thunberg's fight for the climate. (17.04.2019)