How will Iran′s economy hold up if sanctions return? | Business | Economy and finance news from a German perspective | DW | 11.05.2018

How will Iran's economy hold up if sanctions return?

Trump’s decision to end the Iran nuclear deal will hit the Iranian economy, although with China and the EU not on board the impact may be less severe than some fear. How Iran's banking system fares could tell us more. 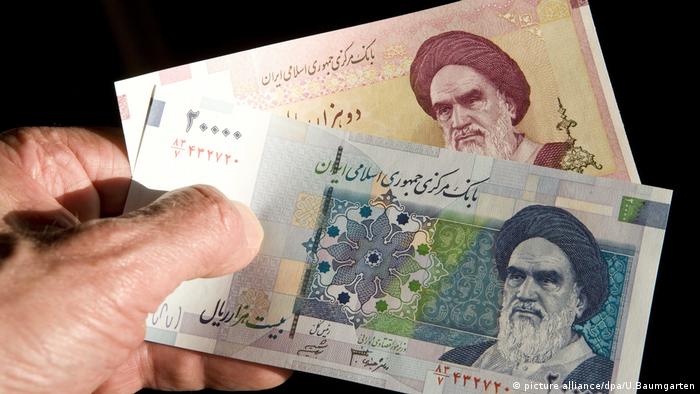 President Hassan Rouhani sought this week to reassure Iranians that their country's economy could withstand the likely reimposition of sanctions. after US President Trump's nuclear deal pull out.

But opinions differ on the extent to which Rouhani's words are bravado.

"The sanctions could significantly reduce Iran's oil revenue, making it hard to have access to its oil revenue in cash and could push Iran to have oil for goods and services deals," Sara Vakhshouri, the head of Washington-based consultancy SVB Energy, told DW.

"But," he added, "some people are getting their knickers in a twist over this. In 180 days, we will probably see sanctions going back on, and Germany and other EU countries will achieve some concessions," Kushner said.

"The idea that Iran is on the brink of economic collapse is probably overstated and it is certainly overstated by those who think the result of said collapse will be a revolution that favors interaction and positive relations with the outside world," Richard Nephew, Adjunct Professor at Columbia University, told DW.

Trump and his Middle East allies — Israel and Saudi Arabia — are gambling that the new hawkish line will cut Iran's economic lifeline and break the regime but there are fears over how the impact of sanctions will affect Iran's relationship with its neighbors.

"As the Iranian economy goes from bad to worse, I see the ascendancy of revolutionary guard and threats to Rohani's position and that is bad news for Middle East peace," Kushner said.

Ali Khamenei has repeatedly shown he is willing to do whatever it takes to stay in power, but as the economic crisis deepens support for the regime among core supporters in the Basij paramilitary group may erode, experts say.

Teachers recently went on strike in the central city of Yazd, steelworkers and hospital staff did so in the southwest city of Ahvaz and railway employees protested near Tabriz. This followed street protests in late 2017 in the provincial city of Mashhad over high prices, which turned into demonstrations in 85 cities nationwide.

Many Iranians have expressed anger about Tehran's funding of Hezbollah in Lebanon, Shiite militias in Iraq and and in Syria. Analysts reportedly believe a large chunk of Iran's $350 billion (€293 billion) budget is spent on military and political interventions in Syria, Iraq, Yemen and Lebanon.

Iran's leaders have reportedly overseen a 128 per cent increase in military spending over the past four years.

Added to this, reports of banks running Ponzi schemes enriching those in power has angered many.

It's the banks that count

Loans at risk of default spiked after oil prices fell in 2014, prompting Rouhani to reform the domestic banking system.

The Central Bank of Iran (CBI) is midway through implementing the reforms, but with 30 banks and other credit institutions, Iran's banking system is more fragmented than in many other emerging markets.

And added to the effects of sanctions, mismanagement and heavy politicization of banks' lending policies on the back of a real estate boom in the 2000s, any reform attempts go to the heart of the business-military-clerical nexus that dominates Iranian politics.

The US-based financial industry body the Institute of International Finance (IIF) estimated in 2017 that banks' outstanding loans were around $283 billion and non-performing loans (NPL) stood at 12.5 percent. The latest official figure is 11.7 percent , while some sources say NPLs could be even close to 15 percent.

The International Monetary Fund (IMF) has called on Tehran to recapitalize and restructure its banks. In a report released two days before Trump's announcement the fund said sanctions could pose a risk to the nation's banking system.

In March, the CBI instructed all banks listed on the Tehran Stock Exchange (TSE) to retain profits and increase their capital. However, the problem is that most banks don't make any profits.

Several Iranian banks are following government instructions and have started to sell their non-core assets, but with limited success.

But sanctions might not bite so hard this time, some believe.

Firstly, because most of Iran's oil exports — over 1.5 million barrels per day (bpd) — goes to Asian countries. The reactions of China, Japan, India and South Korea to these new sanctions will be critical to their impact.

China is the world's largest importer of Iranian crude, at an average of 648,000 bpd, and demand is growing.

"Other countries, including China, Russia and India, will need to decide to what extent they comply with US sanctions threats or, alternatively, approach this as an opportunity to further strengthen their commercial positions in Iran," Justine Walker, head of sanctions policy with trade association UK Finance, told DW.

Japan and South Korea are thought likely to reduce Iranian crude imports to comply with US sanctions.South Korea is in an especially difficult position as it seeks to show North Korea it is serious about committing to a denuclearization deal while India, the second largest importer of Iranian oil, is unlikely to be immediately affected by US sanctions.

Secondly, because Europe, which went along with the sanctions previously, may not do so again. The bloc could seek a waiver to allow it to continue buying oil from Iran. Historically, Europe and the US have not seen eye-to-eye on Iran and German comments this week appear to indicate that if anything that rift could intensify.

Growth: The IMF was predicting GDP growth of 4.3 percent this year, but that could fall if sanctions are reimposed.

Currency: The rial has fallen 25 percent against the dollar in recent weeks.

Inflation: At 8 percent, but if oil revenues fall and foreign investment winds down, more pressure on the rial could drive prices up more.

Purchasing power: In real terms, Iranians have become 15 percent poorer over the past decade.

Foreign investment: With US sanctions likely returning, European companies such as automaker Daimler and oil company Total could pull out. US aerospace giant Boeing has an estimated $20 billion in planned aircraft sales to Iran and what happens to that is open to question.

Domestic investment: High interest rates have driven fixed investment down to about 20 percent of GDP, at least ten percentage points lower than required to bring down unemployment.

Unemployment: Above 11 percent. According to the 2016 census, among college-educated 20-29-year-olds, 36 percent of men and 50 percent of women are out of work. Unemployment is at an estimated 15 to 20 percent in urban centers and 60 percent in some rural areas.

Although Benjamin Netanyahu is an outspoken opponent of the Iran nuclear deal, not everyone in Israel is convinced Donald Trump's decision was justified. Some experts say there is still a need for an agreement. (09.05.2018)