How to turn drone-flying kids into tech-savvy experts | Business | Economy and finance news from a German perspective | DW | 12.08.2020

For many kids around the globe, there's nothing more exciting than flying a drone. A group of trainers in Berlin builds on this enthusiasm to teach youngsters a million things about the technology surrounding drones. 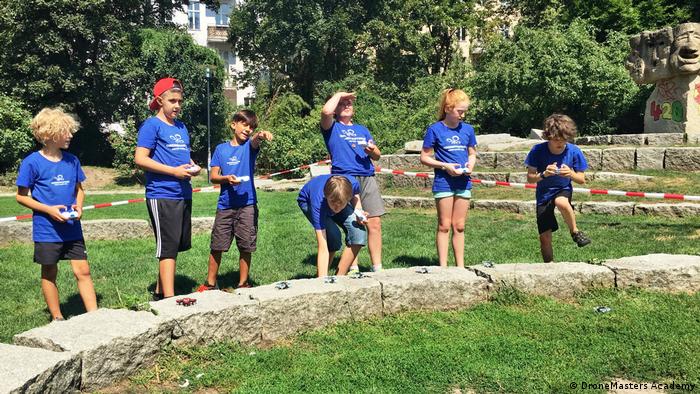 In downtown Berlin's Mitte district, the summer heat doesn't keep a motley group of youngsters from listening attentively to two trainers teaching them the basics of drone flying in a playful and entertaining way.

Digestible and yet demanding doses of input, interspersed with multimedia presentations from the web and question-and-answer rounds, keep the class focused on learning as much as possible about various types of drones and what you need to know to fly them safely.

It's day four of a weeklong summer camp for teenagers organized by the Berlin-based DroneMasters Junior Academy and available for kids between 10 and 15. 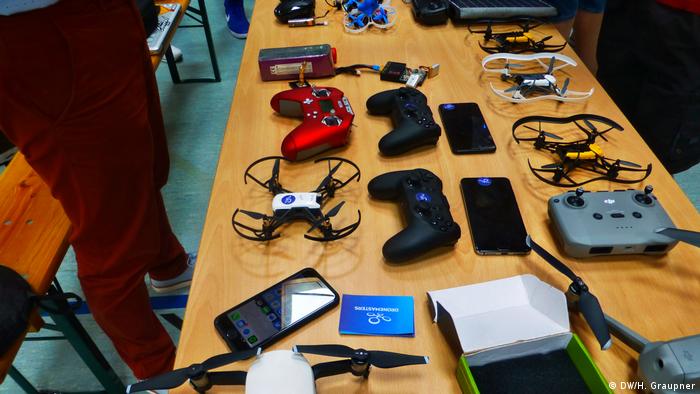 Participants in the summer camp get to know a lot about the different types of drones and controllers, but that's not where it stops

More to it than just fun

Participants get ample opportunity to fly drones of all conceivable shapes and sizes, and that's what many have come for primarily. There's nothing wrong with that, but they soon find out that theory classes can be a lot of fun, too.

And there's so much to learn, starting from the basics of aviation and the technology behind drones right down to getting the hang of how to design and build a drone with the help of online tools. Plus printing essential parts with 3D technology and understanding the legal requirements and rules for flying such objects.

The group is also learning to choose the right battery system for a given drone and how to program basic moves with an intuitive coding language called Scratch. This way, the teenagers improve their logical thinking abilities by handling functions, variables, loops and conditions. 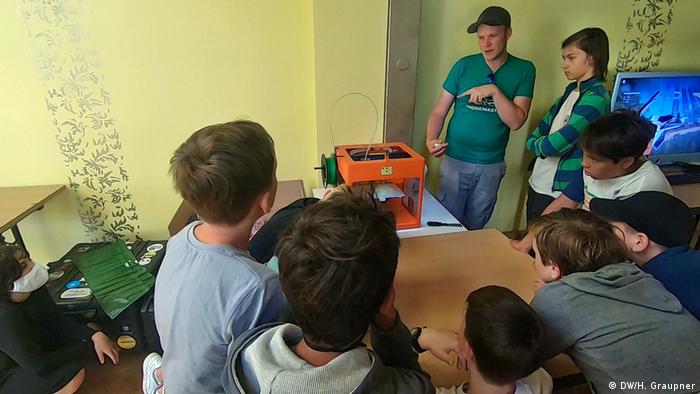 The idea behind it

Lead trainer Branko May Trinkwald tells DW that in everything the kids are confronted with during the summer camp, the organizers never lose sight of the big picture.

"We try to use drone racing sport as an instrument to teach the participants about digitization processes in society, and natural sciences feature prominently as well — math, physics and whatever else you need to navigate your drones in airspace," Trinkwald tells DW.

His colleague, hardware engineer Philipp Horstmann, adds that the camp is about showing the kids how to put to use the theoretical knowledge they're confronted with at school.

"Mathematics is not about being able to juggle figures, but in our case you need to be able to calculate a drone's thrust, rotational speed or maximum flying time in midair," Horstmann tells DW. "Germany lacks engineers, and our camp is not about making everyone a drone pilot by profession, but rather about piquing young people's interest in technology — that's why you also hear a lot here about robotics, 3D printing and the like." 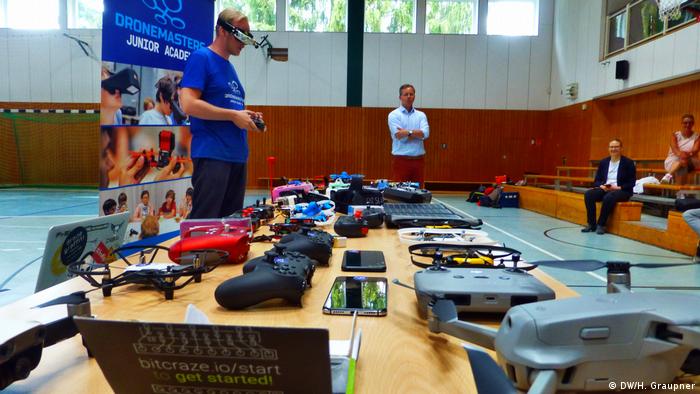 This concept seems to go down extremely well with the participants. "There's never a dull moment," says 13-year-old Nils. "Look, instead of coming here at 10 a.m. when the course officially starts, lots of us are motivated enough to arrive an hour earlier to sit behind the simulator to improve our flying skills and get valuable tips from our trainers."

"That's the kind of team building we're after," says Trinkwald. "And the code of conduct is equally important — after all, we want teaching materials including our drones to be handled with care, and we want them to survive."

Philipp Horstmann is certain that some of the basics taught during the camp will come in handy when the participants start wondering about their future professions and careers.

"Let's not forget either that drones are increasingly in use in many sectors," he notes. Especially during the current pandemic, many logistics companies have increased their use of drones. They're also used for surveillance purposes, in agriculture, among firefighters and by sea rescue services — a lot more fields of application are sure to come." 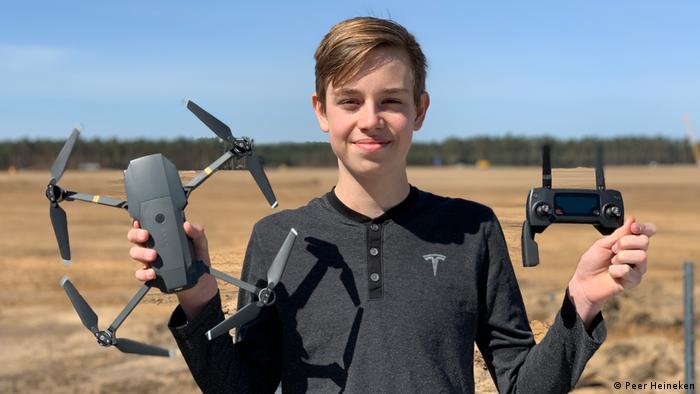 'Tesla Kid' Silas Heineken also attended the summer camp this year. He's made a name for himself by providing free drone camera footage showing the construction of a Tesla Gigafactory at Grünheide outside Berlin, Germany

The youngsters attending the DroneMasters Junior Academy in Berlin may not be thinking about that right now, as the fun part of flying drones takes precedence.

"I'm really here for the fun of it," says 15-year-old Benno, who's attending the camp for the third time. "I'm definitely interested in drones and everything around them — right now it's a big hobby, but I can certainly imagine it becoming something bigger in my future professional career."

Nils couldn't agree more. "I'm thinking about making professional photos with cameras on board drones," he says. "The stuff that I've learned here can't do any harm, can it? I could probably become a good photographer and do this for a living."

Drones and farming go together well