Drones could be a good way to help enforce social-distancing rules during the coronavirus crisis, two German police unions have said. But their widespread use raises civil liberty concerns. 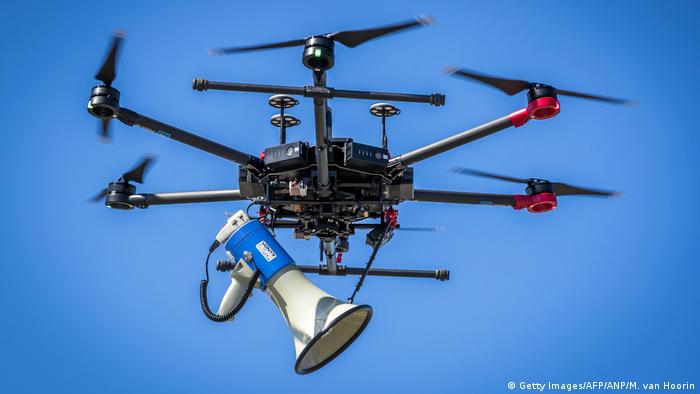 The two largest German police unions have urged authorities to consider allowing the widespread use of drones to help officers ensure that people stick to rules on social distancing while outside.

"If police want to get a good overview of public green space or park in a large city during fine weather, a drone could be a practical tool," Jörg Radek, the deputy chairman of the GdP union, told the DPA news agency.

Radek admitted, however, that the use of drones could create concern that civil liberties were being eroded.

"We have to be sensitive about it. Drones are a new resource and could create the impression for many citizens that we are on our way to a surveillance state," he said, adding, "We must make sure that we don't lose sight of what is proportionate even during this period."

The other police union, DPolG, said it would "very much welcome" the use of drones. Its chairman, Rainer Wendt, told DPA that he hoped police could overcome the current reluctance on the part of state authorities.

"So far, interior ministries have been very reticent or even negative about using drones. But employing drones would be helpful and desirable as a support for security personnel, so the ministries would be well-advised to make these capacities available and expand them," he said.

Drones have already been used by German police in some exceptional cases to enforce social-distancing rules during the coronavirus pandemic, according to DPA, including in the western cities of Düsseldorf and Dortmund.

Loudspeakers fitted in the drones were sometimes used to warn people about the health risks of coming too close to one another — comparable to announcements made from a patrol car, a police spokeswoman said.

A spokesman for the Düsseldorf police stressed that the drones were not used to identify individual people and that no pictures were stored. He said people's reactions had been "very positive."

The federal data protection commissioner, Ulrich Kelber, said that surveillance with drones had to adhere to the same rules as video surveillance. Police would be allowed to use them only to carry out concrete tasks, he said, which "rules out their arbitrary and ubiquitous use."

Programmers spent a weekend seeking electronic means to spread information and slow the spread of COVID-19. The projects judged most helpful after the German government's two-day hackathon will receive official backing. (09.04.2020)

Germany's health minister thinks that companies and critical infrastructure could be impacted by rising COVID cases during the colder months. Berlin is preparing to roll out booster shots for older and vulnerable people.

In Colombia, a rumor about man's best friend infecting people with the coronavirus spread like wildfire. As a result, thousands of dogs were abandoned during the lockdown. At least some of the strays have found new homes.