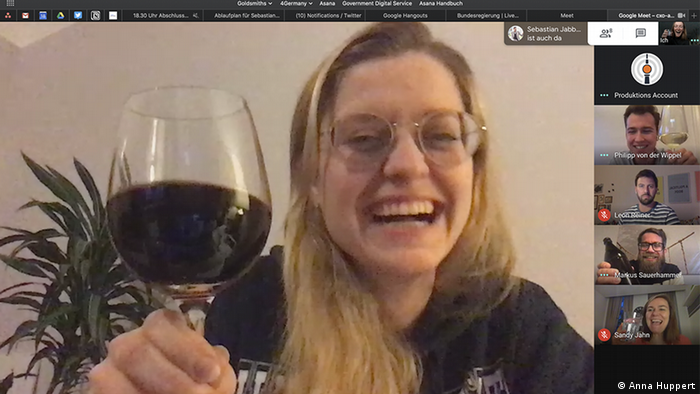 About 28,000 people participated in the German government's #WirVsVirus (We Vs. Virus) hackathon. "We were blown away after the first 3,000 signed up," Anna Hupperth (pictured), who handles communications for the project, told DW.

The model for this attempt to find digital solutions in the global fight against the coronavirus pandemic was a similar event in Estonia. "My colleagues and I noticed that a lot of ideas were coming from Germany," Hupperth said. "And the hackathon created a digital space for those who were already busy trying to find smart solutions for the current crisis."

From March 20 to 22, participants spent 48 hours working on a total of 1,500 proposals for dealing with the COVID-19 pandemic. Of these, 20 — including an online platform for using 3D printers, and websites to coordinate logistics and find job openings for people who currently cannot report to work — were selected for financial support.

Lorenz Schneidmadel developed his idea with colleagues from Vietnam, where he has lived for a year and a half, working for a company that helps facilitate study in Germany. The 25-year-old told DW that he and his colleagues had become aware of the outbreak in January but, when he informed friends in Germany, they brushed the illness off as harmless, akin to the flu.

Read more: Will the coronavirus mean failure for African startups?

Schneidmadel said he recently asked to be put on the email list for the German Embassy in Ho Chi Minh City, where he lives. "Suddenly, I was getting a lot of mails with very relevant information, such as which hospitals in Ho Chi Minh City fulfilled international standards," he said.

He noticed that it was not possible to view previous emails sent by the embassy. German nationals living in Vietnam also weren't getting other important information, Schneidmadel said. During the hackathon, he and his team developed a prototype for an app to bundle breaking news updates from the embassy and allow Germans abroad to actively communicate with authorities — something that has taken on additional importance as authorities try to get travelers back home.

Implementation appears to be a ways off. "We still don't have an official response from the Foreign Ministry," said Laura Chiesa, who lives in Berlin and worked with Schneidmadel on the project. "The quickest way to get rolling would be for embassies to include us on their mailing lists." She said that would allow the team to feed relevant information straight into the app. That would require official support from the Foreign Ministry, though, as embassies cannot operate independently.

Matthias Schnippe, who works as a development coordinator, used the hackathon to develop a project that makes use of existing infrastructure. Schnippe and his team created a prototype for a telephone hotline that would automatically get information about the coronavirus pandemic to people in Africa who lack internet access or do not read.

"Right now, most of the information is focused on prevention and how to effectively stop the spread of the virus," Schnippe told DW. "But we can quickly shift content once the virus starts to spread. At that point, people would get information about where they can go to get treatment."

Schnippe said his company already had contracts with telecoms across Africa. "The most important thing is to work closely with local authorities in order to tailor content to support the local situation," he said. Content would be offered in several languages and, Schnippe said, the platform would become increasingly important as the virus spread across Africa.

Read more: What do futurists imagine for the post-pandemic world?

Jan Riedel and a group of friends and former classmates from his IT studies put forth a prototype for a "digital waiting room" tailor-made for domestic use in Germany. "None of us can go out right now," Riedel said, "and we all wanted to work on finding a solution to the problem."

Riedel said the project was designed to bundle information about the virus — ranging from recognizing symptoms to understanding what to expect during recovery. "We noticed that all of the information was out there," he said, "but it was spread out across a bunch of different platforms." Riedel said he and his colleagues would not need any financing because they are all working on the project in their free time. He said most of those involved worked full time as computer programmers.

Some of the selected projects are likely to receive funding. "We are currently in talks with the federal government," Hupperth said, "and we will also make use of crowdfunding."

Hupperth said most projects were in their early stages and added that she and the other organizers would aim to identify further needs. For example, she said, none of the 1,500 projects worked on during the initial hackathon had addressed the increases in domestic violence during lockdowns. That, she said, is an issue that organizers urgently want to address.