How to know if you're really a socialist

If you were held at gunpoint and asked whether you were a socialist, would you answer yes or no? Following a visit to Cuba, DW columnist Kate Ferguson shares her thoughts on the issue with us.

Are you a socialist? Quick! Spit it out. Yes or no.

No looking it up in Merriam-Webster. No phoning a friend. Socialism and you: yay or nay?

Ever since I visited Cuba last November, I've realized this is a question I am ill-equipped to answer at gunpoint.

I'm speaking metaphorically of course. The country has a notoriously low crime rate.

Prior to my trip, socialism had evoked pleasant associations. Health care for all. Paid parental leave. A fair rental market. The kinds of things you'd have to be a bit weird to dislike.

Now I also see an old woman queueing up in a supermarket with a ration book. Five men painting a public bench. A mother overwhelmed with gratitude because I gave her a packet of wet wipes for her baby. The words "Socialismo o muerte!" (Socialism or death) printed on murals all over the country.

Those associations made socialism seem a little less warm and fuzzy. And yes, of course there are the oppressive regimes of the former Soviet Union and that of modern-day China and Venezuela to consider.

So, what's a girl at gunpoint to do when no one can agree on what socialism actually is?

Ask Bernie Sanders and he'll tell you it's all the good stuff but without the government owning the means of production. The kind of system that already exists in Sweden, for example.

When I suggested this to my Cuban guide, he laughed into his rum. "Sweden's not socialist!" he said indignantly. "They have private enterprise!" 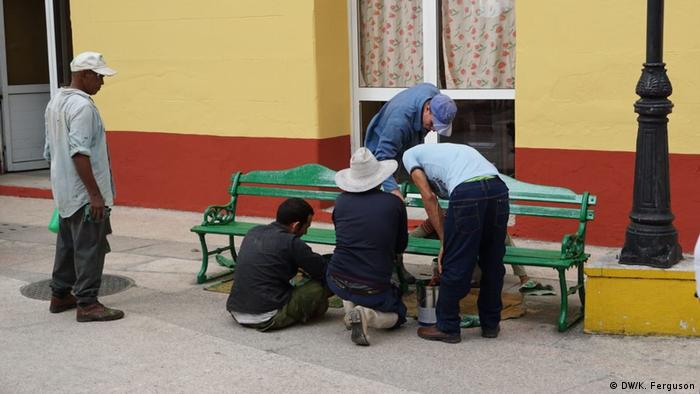 Five Cubans painting a public bench — socialism at its best?

Official definitions of socialism don't offer much more consensus. They range from — I'm paraphrasing — "the period between capitalism and communism" to "the collective ownership of everything."

Perhaps one reason we're living in such confusing and turbulent times is that our political and economic theories haven't caught up with the realities of our everyday lives.

What's the "means of production" in an era of algorithms and big data? What are the benefits of full employment when those working can't afford to live well?

What good is a college education that leaves you unemployed or saddled in debt?

Like feminism, socialism is a badge that you'll be maligned both for wearing and not wearing, depending on the company you keep. As a politician, it's a term that you must either pin to your lapel or cast off in disgust.

Here in Germany, the term is especially slippery. It was Social Democrat Chancellor Gerhard Schröder who introduced sweeping labor market reforms that created thousands of jobs but also led to a dramatic rise of the low-wage sector, now affecting nearly one in four jobs in the country.

It was Conservative Chancellor Angela Merkel who admitted hundreds of thousands of people seeking refuge from war or simply better lives during the refugee crisis in 2015.

And it was none other than The Left party's parliamentary leader Sahra Wagenknecht who questioned this very policy, going as far as to describe the principle of open borders as weltfremd, or out-of-touch with reality.

These kinds of contradictions are not unhealthy. In fact, they reflect the complexities of an increasingly globalized and digital economy that is changing too fast for any one political party or narrowly defined ideology to keep up with.

It's time to scrap the term and focus on the issues instead. I'm sure the gunman — or woman — will understand.