German Left's Wagenknecht to stand down

German Left party icon Sahra Wagenknecht plans to quit as co-leader of her caucus in the Bundestag parliament. Citing health issues, she also recently let go her role in a new cross-party collective called "Stand Up." 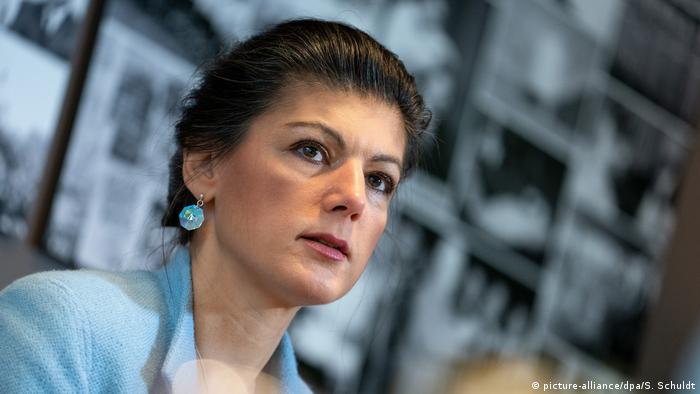 Wagenknecht said Monday she would not seek re-election in September as co-leader of the Left's 69-member opposition parliamentary group, a post she has shared inside the Bundestag debating chamber with Dietmar Bartsch since 2015.

Writing to the party's executive, Wagenknecht attributed her recent two-month absence, including non-attendance at the Left's recent Bonn convention, primarily to "stress and overload," adding that she had recovered and was feeling "fine." 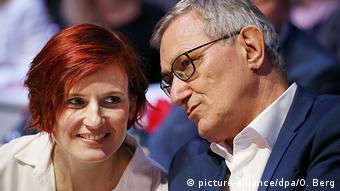 "I will, of course, remain politically active and will continue to commit myself to my convictions and social goals," said Wagenknecht, a high-profile figure often invited to televised talk shows, who originally comes from Germany's eastern state of Thuringia.

Alongside her parliamentary role, Wagenknecht in September became co-initiator of "Stand Up" (Aufstehen), billed as a collective movement seeking to vocalize grievances of disaffected grassroots citizens, but seen by party organizers as a rival entity. Wagenknecht also said Sunday that she would relinquish her role in that movement.

The apparent retreat by Wagenknecht, 49, who has openly clashed with other Left party leaders over their migration policies, prompted calls nevertheless Monday for her to stay active.

"I respect Sahra Wagenknecht's personal decision," said Bernd Riexinger, who has led the Left Party nationwide since 2012 together with Katja Kipping — a Wagenknecht rival.

Riexinger said he assumed that Wagenknecht and Bartsch as co-leaders of the Left's 69 parliamentarians would continue to work "well" up until September.

Jan Korte, who manages the Left party Bundestag caucus, stressed on Monday that Wagenknecht — who has also authored books on capitalism and limits to freedom — planned to retain her federal parliamentary seat beyond September.

Ralf Stegner, deputy chairman of Germany's Social Democrats (SPD) and on its leftist wing, said the withdrawal of Wagenknecht — given her far-left origins — made forming a "progressive" governing coalition on the left more likely in the future.

Wagenknecht entered German post-unification politics in 1991 as a member of the extreme-left Communist Platform within what became Germany's Left party.

She is married to Oskar Lafontaine, a former Social Democrat finance minister, who fell out with former chancellor Gerhard Schröder in 1999 over his welfare cuts and went on to co-found the Left party in 2007 — combining eastern and western German leftists, including former communists.

The movement has since been riven by organizational wrangles and claims that it functioned "top down." 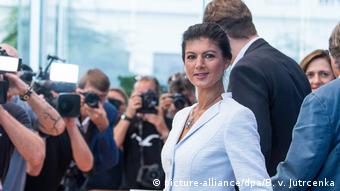 In early March, the leftist German weekly Der Freitag wrote that unlike the Gilets Jaune (Yellow Vests) in France, some leftist German critics of "Stand Up" regarded Wagenknecht as a "dazzler" and were even "satisfied" by its lack of momentum.

Its troubled emergence had been complicated by power plays and "unclarified responsibilities," reflecting that in a "real class struggle" individuals and "not organizational professionals and net-workers" sought to be at the helm, wrote Der Freitag.

At a Left party congress in Leipzig last June, delegates voted pro-refugee by a large majority, rebuffing Wagenknecht's assertion that the Left had abandoned its traditional worker support base to far-right movements, including the Alternative for Germany (AfD) party.

In her 2016 book "Wealth without Greed" (Reichtum ohne Gier), Wagenknecht postulates that "we live in an era of business feudalism that has nothing to do with free or social welfare economics."

To understand German politics, it helps to understand "Hartz IV," a controversial welfare benefits and unemployment insurance reform introduced in 2003 by a coalition government led by the Social Democratic Party (SPD). (06.06.2017)