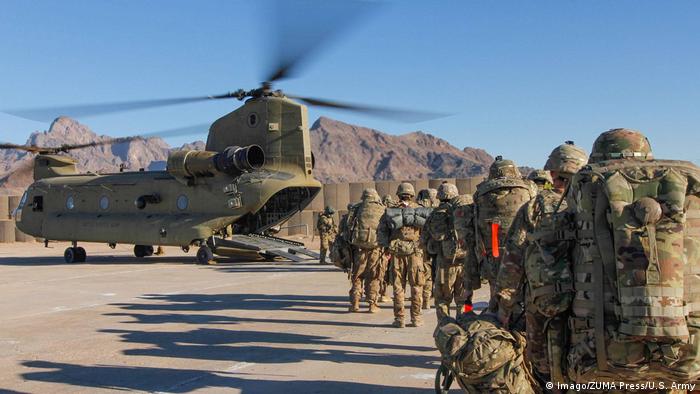 On October 7, 2001, the US invaded Afghanistan to avenge the al-Qaida-orchestrated September 11 terrorist attacks. The primary aim of the US invasion was to hunt down Osama bin Laden and punish the Taliban for providing safe haven to al-Qaida leaders.

It took little effort on part of the US to dismantle the Taliban regime. Bin Laden, however, managed to escape. The former al-Qaida head was eventually killed by US troops in Pakistan's Abbottabad city in 2011.

The invasion was largely a success, although Taliban and al-Qaida fighters remained evasive and managed to regroup just a few years after the Western-backed Hamid Karzai government came to power in Kabul.

By 2005, the Taliban had regained much of its lost power and launched a violent movement to challenge the NATO presence.

But, for many Afghans, the US invasion and the subsequent collapse of the Taliban regime brought a positive change. It ushered in a new era , with many people becoming optimistic about their country's future.

The US-led invasion boosted Afghanistan's economy. The health care, education, and the overall quality of life in big cities improved substantially. Reconstruction and development work began, and new jobs were created for the Afghan people.

"The first four years after the US invasion were relatively good," Ahmad Wali, a 30-year-old Afghan in Ghazni city, told DW.

Nematullah Tanin, a Kabul-based journalist, agrees: "We were able to write our own constitution, and had a functioning democracy. These remain our biggest achievements."

Arezo Askarzada, a lecturer at a university in Kabul, lived as refugee in Pakistan before NATO forces invaded Afghanistan. She said that she and her family returned to Afghanistan after the invasion in search of a better future.

"We had to rebuild everything. Despite these hardships, the last 20 years were the best years of my life. I could study, and later I started teaching other people, including women," she told DW.

The optimism didn't last for long. In 2003, the US got involved in the Iraq war, hoping that the Karzai administration, with support from Western forces, would quell a nascent insurgency and put Afghanistan on the path of progress.

"At critical moments in the fight for Afghanistan, the Bush administration diverted scarce intelligence and reconstruction resources to Iraq, including elite CIA teams and Special Forces units involved in the search for terrorists," The New York Times newspaper wrote in August, 2007.

"President Bush's critics have long contended that the Iraq war has diminished America's effort in Afghanistan, which the administration has denied, but an examination of how the policy unfolded within the administration reveals a deep divide over how to proceed in Afghanistan and a series of decisions that at times seemed to relegate it to an afterthought as Iraq unraveled," the Times added.

From 2005 onward, US officials continued to accuse Pakistan of providing sanctuaries to Taliban militants. But Washington never put enough pressure on Islamabad to deal with the issue.

Looking back at Germany's involvement in Afghanistan

The resurgence of the Taliban in the second half of the 2000s saw a spike in violence in the country. Suicide bomb attacks became a routine, and civilians paid a heavy price.

"Everything had changed for the worse. There had been daily attacks and armed clashes in our area," Wali said. "Many people I knew had lost their lives. We had lost our homes and everything that we owned."

Akram Arife, a lecturer at the Kabul University, told DW that the US was bound to fail.

"Washington should have known there was no military solution to the Afghan conflict. The US should have looked for other solutions after the invasion," he said.

The expert said the US had focused on Kabul and ignored other parts of the country.

"Most politicians that Washington supported did not have a deep connect with Afghans. Their understanding of Afghan society was flawed, certainly not sufficient to run the government," Arife said, adding that the changes were not organic and therefore didn't last after the US forces exited the country.

The Taliban took control of Kabul on August 15, without facing any resistance from President Ashraf Ghani's forces. Their return to power has raised many questions about the two-decade-long US military presence in Afghanistan. For instance, what did the US achieve in Afghanistan after spending so much time and money in the war-ravaged country?

"We lost everything that we had built in the last 20 years after the Taliban returned to power," the lecturer  Askarzada said. "I am back to the same place where I was 20 years ago," she added. "I cannot work anymore."

Although the Taliban's comeback is a setback to Western intervention in Afghanistan, from the Afghan perspective, the US invasion was not an utter failure.

Experts say Afghan society has changed tremendously since the US invasion — so much so that the Taliban also feel the need to present a "benign" and "moderate" face to their compatriots and the international community. After capturing Kabul, the militant group said it would form an inclusive government, and that the new regime would be qualitatively different from the one established before the US invasion.

The middle class has expanded in the country, and the number of educated people and entrepreneurs has also grown in the past two decades. Different groups — including women, academics and common citizens — are protesting the Taliban rule in different parts of the country.

The Taliban definitely find themselves in a changed country.

Hussain Sirat and Shabnam Alokozay contributed to this story.

As female employees in Kabul were reportedly told to stay home, some staged a protest against the latest restrictions on women by the new Taliban government.