As female employees in Kabul were reportedly told to stay home, some staged a protest against the latest restrictions on women by the new Taliban government. 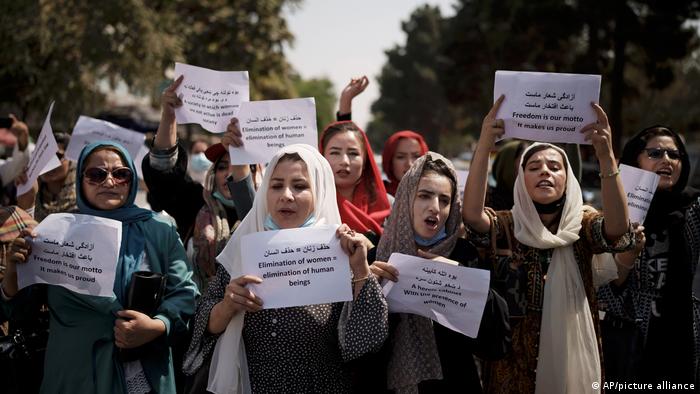 Several Afghan women gathered in Kabul on Sunday to demand the right to work and study under the new Taliban-run government.

Since the Taliban's return to power after a two-decade war, the fundamentalist militants have issued restrictive rules on girls' education and women's participation in public life.

Over a dozen women protested outside the premises of what used to be the Afghan Women's Affairs Ministry — until the Taliban turned it into the department for the "propagation of virtue and the prevention of vice."

"A society in which women are not active is [a] dead society," one sign read as protesters chanted, "women's rights and human rights." 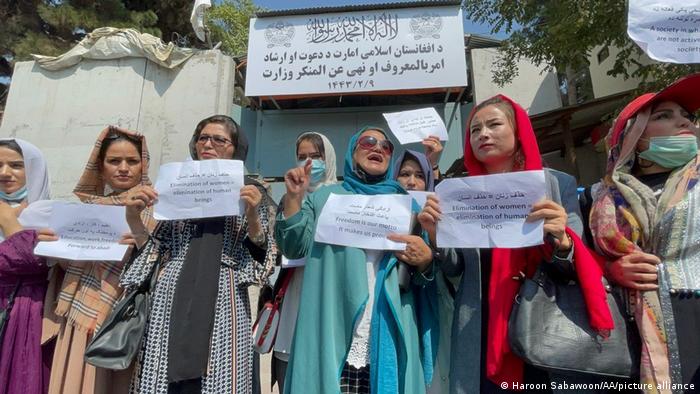 Women gathered in front of the former Women's Affairs Ministry, two days after the Taliban replaced the ministry's banner

According to the Associated Press news agency, the Taliban's interim Kabul Mayor Hamdullah Namony said on Sunday that female employees have been ordered to stay home, pending a further decision.

Namony said exceptions were made for women who could not be replaced by men. "There are some areas that men can't do it. We have to ask our female staff to fulfill their duties. There is no alternative for it,'' he was quoted as saying by the AP.

Women in several areas across Afghanistan have been told to stay home from both public and private sector jobs. But the Taliban have not yet announced a uniform policy towards women's work.

What is the Taliban's stance on women's rights?

During the Taliban's rule in Afghanistan in the late 1990s, the Islamist militants enforced hard-line policies toward women, including publicly beating those who dared to venture outside without covering their entire bodies.

After the Taliban seized power last month, they tried to strike a conciliatory tone, vowing to uphold human rights and respect women's rights "within the limits of Islam."

So far, they have forbidden girls from attending secondary school and instructed universities to segregate classes by gender. The Taliban also named a new Afghan Cabinet with no women in ministerial positions.

Hundreds of women have taken to the streets to protest these restrictions over the past month. Their demonstrations have mostly been met by force from Taliban fighters.

The UN high commissioner for human rights took aim at Taliban leaders for a lack of inclusivity. Michelle Bachelet sounded the alarm on a raft of issues ranging from women to reprisal killings.