How the Nazis used poster art as propaganda

The Nazis made extensive use of propaganda to cement their reign of terror. An illustrated book looks at the psychological manipulation behind Nazi poster art. 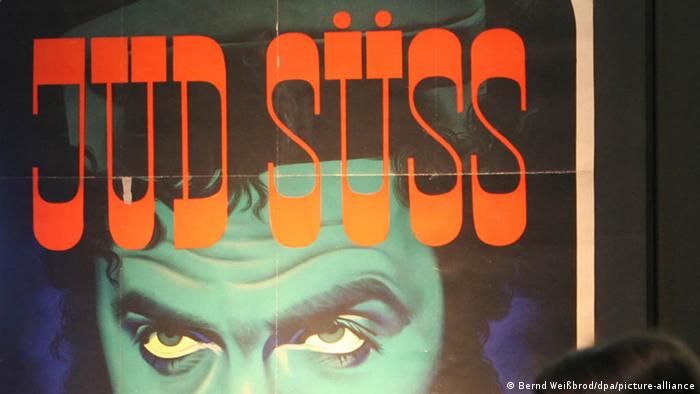 'Jud Süss' was an anti-Semitic film produced under the Nazis

"Is propaganda, as we understand it, not also a form of art?" asked Joseph Goebbels, Nazi Propaganda Minister, in June 1935. The question may have been rhetorical, but at the time, the Nazis had already been in power for almost two-and-a-half years.

They had long laid the foundations for their reign of terror that would culminate in World War II and the Holocaust. It was a regime based on intimidation, murder and control that would not end until 1945. 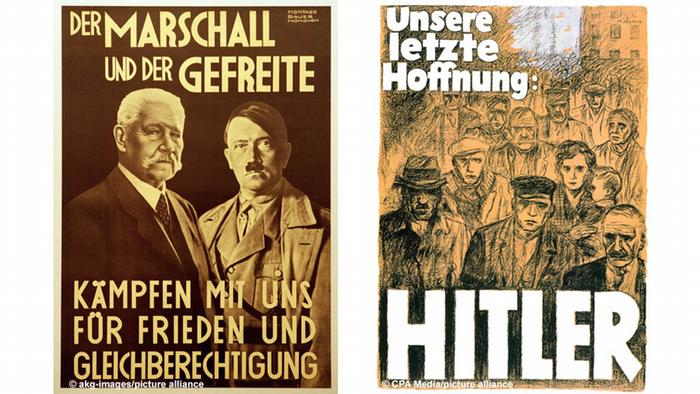 Propaganda posters as weapons of war

Adolf Hitler didn't lose any time in getting the military ready for war, and he made sure that civilians would toe the line, too. While the troops were equipped with new tanks, airplanes and submarines, the people on the home front were fed endless newsreels in movie theaters, heard a deluge broadcasts on the radio, and saw propaganda posters wherever they turned.

Sylke Wunderlich examines the significance of these posters in her book Propaganda of Terror, which features more than 200 illustrations and focuses on art and ideology.

"I think the artistic style of the posters contributed greatly to the fact that they were so successful in influencing the masses," Wunderlich told DW, adding that she means they were "successful" in the sense of Nazi politics.

She highlights that the Nazis had never shied away from copying the most effective Socialist and Communist strategies, even well before the Nazi party had risen to power in 1933. In terms of their style and iconography, posters and placards depicting the likeness of Adolf Hitler could have easily been a product of the revolutionary left — if they had instead shown a picture of Rosa Luxemburg or Karl Liebknecht instead. 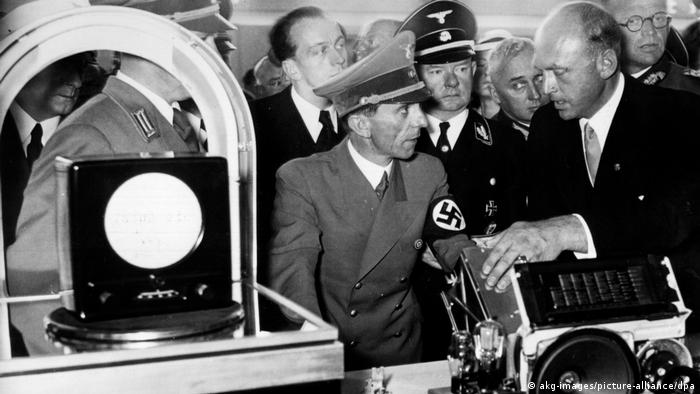 The 'Volksempfänger,' or radio receiver, was Propaganda Minister Joseph Goebbels' (pictured in the center) preferred method of mass communication

The 'modern' aesthetic of the Nazi regime

The posters were designed by staunch Nazi supporters, including graphic artist and architect Ludwig Hohlwein. His propaganda posters were so successful that after World War II, Hohlwein was banned from working for many years.

But there were also some Bauhaus students involved in the designs, such as Herbert Bayer, who made posters for the Nazi regime before migrating to the United States in 1938. Wunderlich argues, however, that accusations saying that Bayer had allowed himself to be roped in by the Nazis — even if only for a while — are somewhat unfounded. She says these allegations do not take into account the fact that freelance graphic artists had to make a living and survive under the Nazi regime, too.

Wunderlich says that perhaps they were even deliberately approached by the Propaganda Ministry "for their modernity." The Nazis wanted to set themselves apart from the Weimar Republic and its style. They wanted to present themselves as a nation "that is modern, that is new and that is different."

Wunderlich argues that this is exactly why there is no contradiction between the modern appearance of these posters' motifs and the racist ideology at the heart of the Third Reich: The images employed photographic collages, clear lettering and pictorial language — "definitely something people that appealed to people at the time." 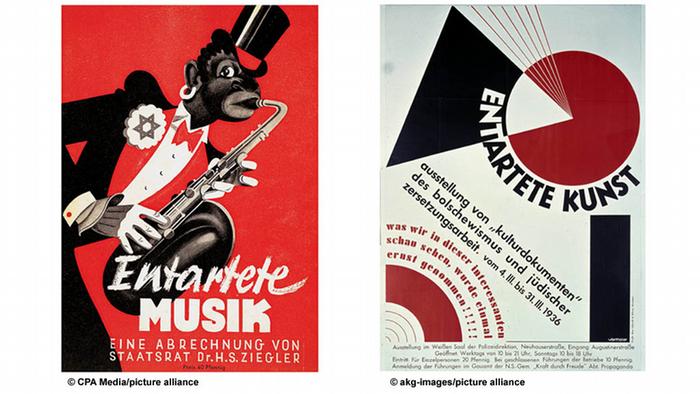 Many forms of art and culture, including Jazz music, were regarded as "degenerate art" by the Nazis — and ridiculed as such

Mouths to feed, posters to design

Herbert Bayer, whose Bauhaus teachers included Johannes Itten, Paul Klee and Wassily Kandinsky, eventually did fall out of favor, however. Some of his works ended up in the 1937 Degenerate Art exhibition, finally giving the artist — who had always considered himself to be apolitical — a good reason to turn his back on Germany. Bayer's case is an extreme example of the contradictions of the Nazi regime's cultural policy, as well a poster designers' opportunistic behavior.

Sylke Wunderlich says that poster art at the time was considered to be a "quite spectacular" medium outside of Germany as well. It was seen as "very modern and constructive." The National Socialists used the pictorial language of poster art to seduce and incite the masses against Jews and Bolsheviks from the beginning, and later against all opponents of the war.

The picture-perfect facade of the aesthetically pleasing images continued to fuel Nazi support for years. It only began to crack much later, when the National Socialists started to lose in battle. 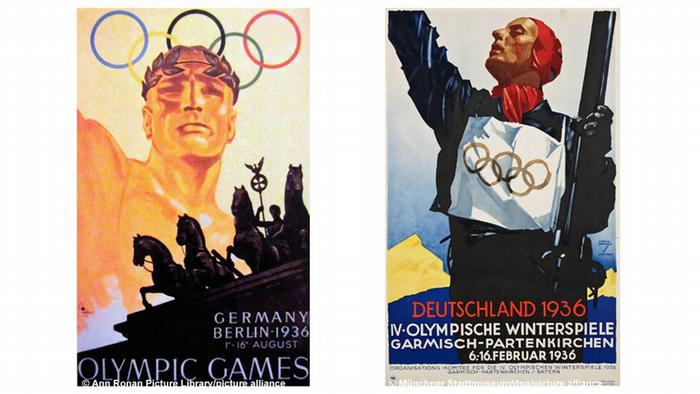 After the invasion of Poland in September 1939, the Nazis' propaganda machine continued to run smoothly — until the defeat in Stalingrad in early 1943. Photographer and director Leni Riefenstahl played a central part in helping the Nazi regime maintain a good image.

Her films of the Nuremberg Reich Party Congresses and of the 1936 Summer Olympics in Berlin were advertised boldly beyond the borders of the Third Reich. This was done with so much finesse that even foreign countries were fooled by the Nazis' veneer: Riefenstahl's ambivalent masterpieces were awarded many prizes, including a first prize at the Venice Film Festival and a gold medal from the International Olympic Committee (IOC).

The seeds of mass seduction were sown particularly well with her films Triumph of the Will and Festival of Beauty, which embodied technical and aesthetic perfection.

Marketing for the films used the Nazis' preferred film poster style. Modern art was used "to convey this terrible, dictatorial state with a beautiful, modern, clean appearance," says Wunderlich. Their strategy clearly worked, "or else the crowds would not have fallen for this policy," says the art historian.

"One people, one Reich, one leader!" was the motto projected on many of the posters that cemented the personality cult around Adolf Hitler. But Hitler was rarely seen alone in the pictures — he typically had an audience of children and young people. Few escaped the Nazis' demand for total subjugation to their misguided cause. Boys were expected to join the Hitler Youth (HJ) and girls joined the League of German Girls (Bund Deutscher Mädel, BDM). 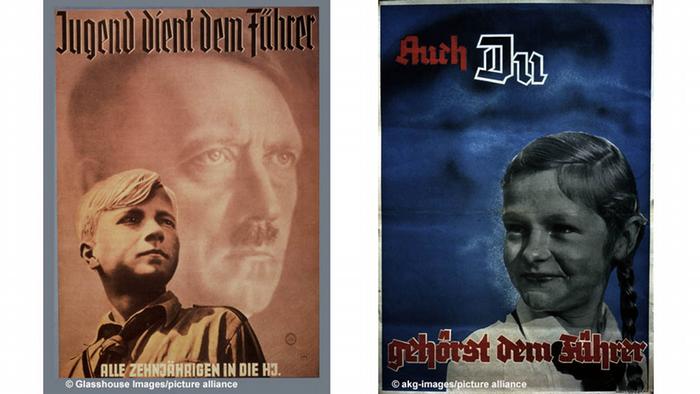 Children and Hitler: a typical combination in Nazi poster art

At face value, many of the propaganda posters of the Nazi era were quite harmless; some even reflected great artistic talent. It isn't difficult to imagine why they would be enticing to so many. Indeed, thanks in part to its propaganda art, the Nazi state could rely on the support of the majority of Germans — at least for as long as there were no bombs falling on Berlin and on other German cities.

For years after the war, it was next to impossible to address many aspects of the Nazi dictatorship, including the finer points — like the aesthetic language of the regime's propaganda posters.

In 2012, 67 years after the end of World War II, an exhibition on Nazi poster art at the Munich Stadtmuseum triggered heated debates. The left-leaning Süddeutsche Zeitung newspaper said that the images shown at the exhibition, titled "Typography of Terror - Posters in Munich from 1933 to 1945," depicted "nothing but propaganda." For many, the iconography of Nazi posters remains a controversial topic, to say the least.

Critics of the Munich exhibition accused its curators of providing insufficient context for the posters. Visitors were left alone with the pictures "[i]n the hope that … their ludicrous nature would just expose itself."

Thomas Weidner, who was the head of the department of graphics and painting at the Munich Stadtmuseum at the time, said that the descriptions of the posters did provide context but conceded that "exhibitions on National Socialism are always a delicate topic." 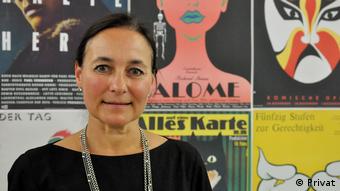 Wunderlich, too, has drawn ire for her unabashed approach of dealing with Nazi posters in the book, which was published in German and English. But the Berlin-based art historian stresses that she has no influence on the fact that right-wing extremists might take pleasure in her analysis.

Yet the author certainly cannot be accused of trivializing the Nazi aesthetic — quite the contrary. If anyone were to buy her book in search of the glorification of Nazi propaganda, they will certainly regret their purchase: it is a revealing analysis of the dangers behind the poster art of the Nazi era.

This article has been translated from German by Dagmar Breitenbach

Eighty-five years ago, fires fueled with literature labeled "un-German" by the Nazi regime burned across the country. Many students enthusiastically joined in the act at the time.