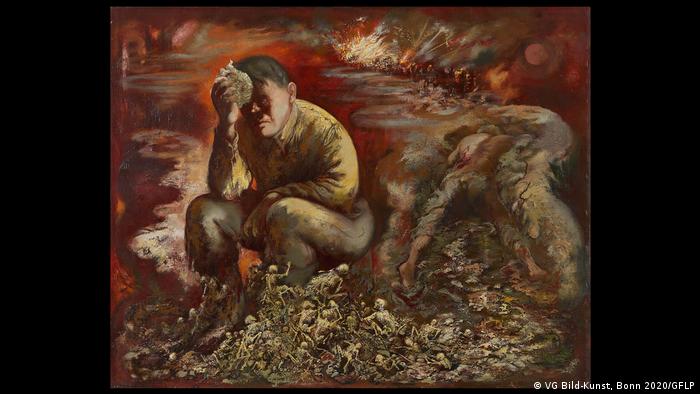 George Grosz was a pioneer of irreverent Dada art in Berlin, an ardent critic of war and nationalism who went into exile before Hitler seized power in 1933.

In 1944, while living in the US, he completed a painting that portrays Hitler as a monster dictator reigning over an underworld of mass death and destruction. Titled Cain or Hitler in Hell, the masterwork has been privately owned (by the Grosz family) since its creation, but in 2019 was acquired by the German Historical Museum in Berlin (DHM).

The painting was officially unveiled today in Berlin, with Minister of Culture, Monika Grütters, Raphael Gross, President of the German Historical Museum Foundation, and Markus Hilgert, General Secretary of the Cultural Foundation of the German Federal States, in attendance.

Purchased by the DHM with the support of the federal government and the Cultural Foundation of the German Federal States, the acquisition marks a major coup for the institution as the painting is considered one of the outstanding works created by a German artist in exile after the rise of the Nazi regime.

Hitler in Hell, as it is known, will soon be on view to the public as part of the museum's permanent collection.

"We are very grateful that this important testimony of German exile art during National Socialism could be secured for our collection," said Raphael Gross on February 4 at the official unveiling at the DHM in central Berlin. "Especially with regard to our new permanent exhibition, which we are currently designing, it will be a central object that tells us a lot about the artistic confrontation with Hitler and National Socialism."

Grosz, who gained a reputation for his highly political Dada art during the Weimar Republic, was a World War One veteran who became a trenchant critic of German nationalism and joined the Sparticist uprising in 1918.

As a communist and fierce anti-Nazi who condemned the emergence of fascism throughout Europe, it was no wonder that he emigrated to the US shortly before Hitler came to power in 1933. Soon after, the Nazis labelled his work "degenerate art" and removed it from the public collections in the so-called German Reich.

By the late 1930s, Grosz  began to work again in his New York home, reviving many of his former themes as Hitler fomented world war and news of the Nazi death camps spread. Cain or Hitler in Hell is considered one of the main works of this era. Grosz himself described the picture as a representation of "Hitler as a fascist monster, or as an apocalyptic beast, consumed by his own thoughts."

The artist equated Hitler with the figure of Cain, who in the bible is presented as the archetypal murderer and the first in human history

The German Minister of State for Culture, Monika Grütters, noted at the unveiling that many of George Grosz' paintings were in fact destroyed by the Nazis after they confiscated 285 of his works from public collections.

"By purchasing one of his most important paintings, we are making a mark for reparation, and honoring one of the most talented artists in the Weimar Republic," she said. "Since its creation in 1944, the work Cain or Hitler in Hell has lost none of its power."

George Grosz at work in his Long Island studio in 1940

"On the contrary: George Grosz' apocalyptic vision of terror looks like an appeal, like a warning against forgetting, in view of the renewed anti-Semitism in our society," she continued. "It is works of art like this that help us learn the right lessons from history."

"This decidedly political picture shows how Grosz develops his critical formal language in exile," said Markus Hilgert of the Cultural Foundation of the German Federal States. "It is important to me that young people in particular have access to the painting and are able to deal with the artist's critical view of National Socialism."

He added that it was important to fulfill the Grosz family's wish that the painting is shown permanently where Grosz was born and also died. Though the artist became a US citizen in 1938, he returned to his home city with his wife in 1958, where he died a year later.

In 1919, German women voted for the first time — in an election that was to play a pivotal role in the country's history. It came on the heels of the disastrous Great War and the year before Hitler formed the Nazi party. (19.01.2019)

Rediscovering a Jewish cultural legacy at 'The Weimar Republic of Yiddishland'

Held in the city of Goethe and Schiller, Yiddish Summer Weimar is the world's most prominent annual Yiddish culture event. This year it revives the Jewish creative fervor associated with Weimar-era Germany. (12.07.2019)