Eighty-five years ago, fires fueled with literature labeled "un-German" by the Nazi regime burned across the country. Many students enthusiastically joined in the act at the time. 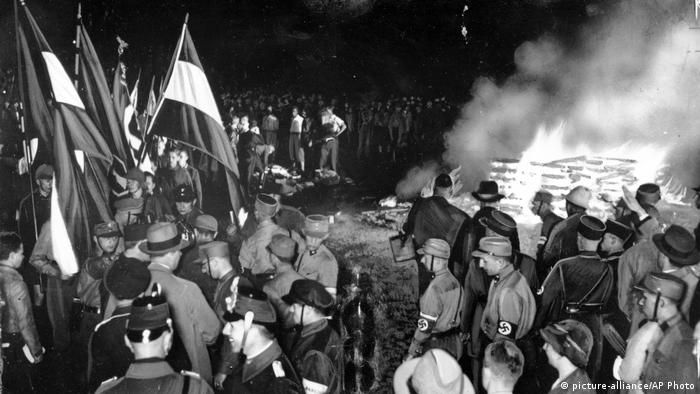 "This was a prelude only. Wherever they burn books they will also, in the end, burn human beings." The words that German poet Heinrich Heine wrote in his tragedy Almansor some 100 years earlier, would, under the Nazis, become a tragic reality. For the book burnings organized by the Nazis in 1933, just months after Adolf Hitler came to power, were just the beginning of a persecution that would force hundreds of authors into exile and cost others their lives.

Groundwork for the event was laid by Joseph Goebbels' Propaganda Ministry and two rival, yet politically loyal, student organizations. Their cry: "The state has been conquered, but not the universities." And that became the call to arms with which the Nazis set out to subjugate Germany's intellectual institutions in the spring of 1933. They found a number of willing helpers in that endeavor, especially at the universities and colleges themselves. 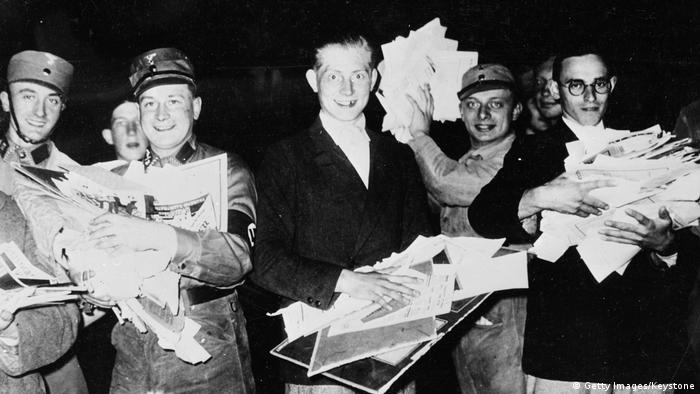 Many students participated in the burning of 'un-German' literature

'Shamelessly pandering' to the regime

But it was not only there that people participated enthusiastically. "We, and I say that deliberately: We as representatives of the booksellers association actively participated in the book burnings,"  Alexander Skipis, managing director of the German Publishers and Booksellers Association — which existed at the time of the book burnings — told DW. "We drew up lists. We instructed booksellers not to carry certain books. So, in the end, we supported the Nazi regime and its ideas." Skipis says booksellers "shamelessly pandered" to the regime in hopes that it would bring economic benefits.

Lists of authors and works representing an "un-German spirit" were compiled. Among those on the Nazi's blacklist, most were Jews, while others were added for being too leftist, liberal, pacifist or too critical of National Socialist ideology. They included Bertolt Brecht, Kurt Tucholsky, Erich Kästner, Heinrich Mann and many others. Scientists such as Albert Einstein and Sigmund Freud were also included. In all, some 100 German and more than 40 foreign authors — such as Ernest Hemingway and Andre Gide — were considered un-German. 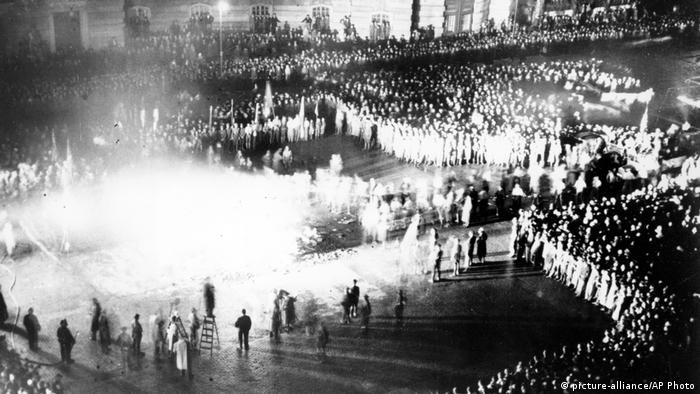 The main book burning took place at Berlin's Opera Square, known today as Bebel Square, on the evening of May 10, 1933. More than 20,000 books were brought to the square for the event. Some 5,000 students arrived with torches and were followed by tens of thousands of onlookers as Propaganda Minister Goebbels spoke at midnight: "The era of exaggerated Jewish intellectualism is now over. … If you students assume the right to cast the intellectual filth into the flames, you must also assume the responsibility of removing this garbage and clearing the path for truly German works." At that point the fire was lit. The lighting, however, needed help from firefighters who threw gas on it in the pouring rain.

The book burnings were not limited to Berlin, nor to that night. For weeks before and after, a number of German universities staged large burnings of unwanted texts. The new president of the University of Freiburg, philosopher Martin Heidegger, addressed students with the words: "Flames, speak to us, illuminate us, show us the path from which there is no turning back! Flames alight, hearts burn!" 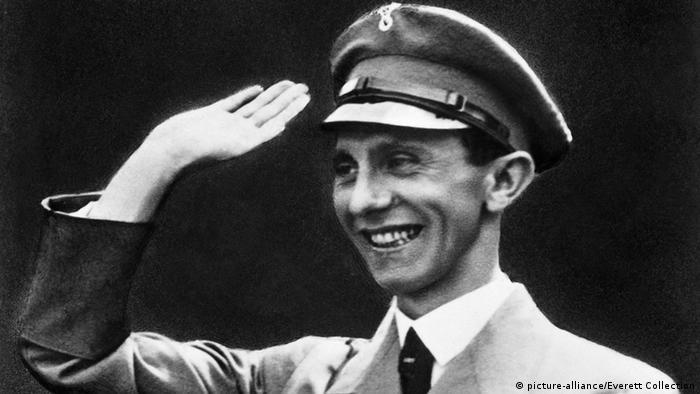 'The era of exaggerated Jewish intellectualism is now over,' said Goebbels during the book burning in Berlin

Kästner watches his own books being burned

There were a number of surprises among the lists of authors and works. For instance, writer Oskar Maria Graf was shocked to see his name on the so-called white list of works recommended by the regime. Upon seeing the list, Graf exclaimed, "Burn me!" Other writers, such as Thomas Mann, were not yet blacklisted but would be later. By 1933, many of the persecuted authors had already left Germany. The only writer to attend the Berlin book burning was Erich Kästner, who looked on as his books were cast into the flames. He was even recognized in the crowd, though nothing happened to him that night. Kästner was one of the few authors on the list who chose to remain in Germany.

Others who chose to remain, such as Carl von Ossietzky and Erich Mühsam, were eventually jailed, where they died or were executed. A number of authors faithful to the Nazi's tenets were more than willing to take the place of the outlawed writers. During his exile in Sweden, Kurt Tucholsky wrote of them: "Here they come now, crawling out of their holes, these provincial literary whores. … Yes, finally the Jewish competition is gone — now is the time!" 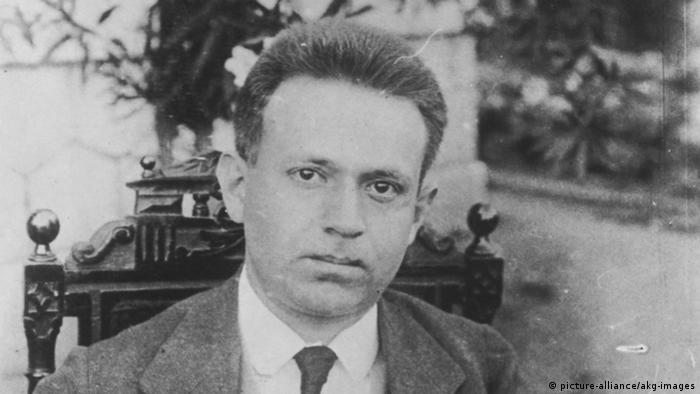 What became of 'never again'

The publisher Skipis calls the book burnings "a signal that should have alarmed the whole world as to what had begun in Germany and would end in awful chaos." Literary critic Alfred Kerr, who emigrated to England while he still had time, explained the "action against un-German thought" thus: Hitler wanted to silence all artists, as "true art hones the conscience, strengthens the intellect, and calls forth criticism of half-truths because it is an appeal for utmost humanity."

Can parallels be drawn between what happened in 1933 and events in the world today? Skipis declined to make comparisons. However, he did raise the point of an "appeasement policy emanating from the German federal government but also from the EU" in dealing with China, Turkey, Saudi Arabia and other countries that violate human rights, simply because one can do business with them, by selling them arms for instance. The booksellers association betrayed its values in 1933, says Skipis. "Today, our values only seem to extend to the point at which they come into conflict with business or geostrategic considerations." He says at that point one must say never again — and resist.