How much longer can Formula 1 drive to survive?

There is much excitement around Formula One at the moment, but behind the new success of the sport lies a troubling impact on the world. How much longer can it justify its cost to the planet? 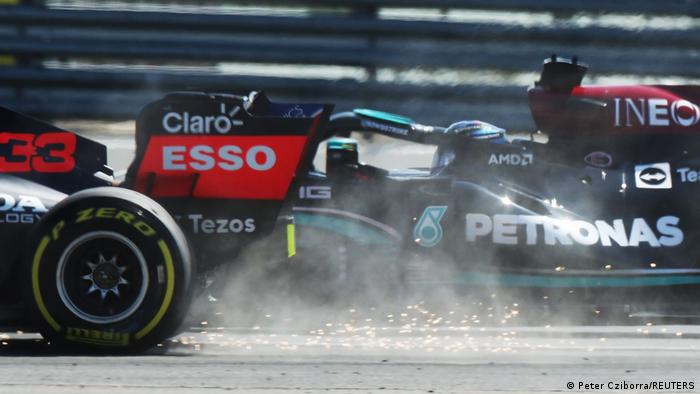 Can Formula One continue to exist at a time when the world needs to reduce its impact on the environment?

Formula 1 is enjoying quite the season. Buoyed by the title fight between Max Verstappen and Lewis Hamilton, the success of Netflix's show Drive to Survive and building off Liberty Media's rebranding and marketing, motor sport's most prestigious series is growing strongly. But at what price?

The international courier service DHL, a major F1 sponsor, revealed that for the 2021 season to happen, it clocked up to 120,000 kilometers (74,600 miles) to deliver cars, teams, broadcast and hospitality equipment, as well as fuel and tires. This is the equivalent of three trips around the world.

Just days after UN Secretary-General Antonio Guterres, speaking at the COP26 in Glasgow, reinforced the fact that the very existence of the world as we know it is threatened by humanity's "addiction to fossil fuels," the idea of flying teams of people to 21 countries to allow 22 1,000-horsepower cars drive around a circuit for an hour and a half seems beyond irresponsible.

Last year, F1 unveiled its climate strategy. This included a new engine that aims to be 100% sustainably fueled and carbon-neutral by 2030, incentives for greener travel for fans, more sustainable materials, ultraefficient logistics and offices, facilities and factories powered 100% by renewable energy.

This all sounds promising, and given the sport's history of developing technologies that have aided the progression of everyday cars, perhaps F1 deserves the benefit of the doubt.

For all the talk of ultraefficient logistics, the biggest contributor to the sport's carbon dioxide emissions, transportation, remains a concern. F1 revealed in a sustainability report that 45% of the 2018 season's CO2 emissions, roughly 256,551 tons, came from the transportation of Formula 1 teams and all their equipment.

Using data provided by the US Environmental Protection Agency to put those 256,551 tons of CO2 into context, that's the greenhouse gas equivalent of 55,795 passenger vehicles being driven for one year.

In response to a DW query, F1 said that since launching its climate strategy in November 2019 it has made "great headway in reducing the volume of equipment we send to races."

F1 said this saved 70 tons of freight being taken to every event, which across last season's 17-race season equated to 1,190 tons of freight not being shipped. This season, with 22 races back on the schedule, it was expected that similar if not more reductions were made.

Formula 1 told DW it was also investing in plans to upgrade its shipping containers, allowing it to transition from an older fleet of 747 airplanes to more fuel-efficient 777s. The move would also offer more flexibility in choosing lower-impact modes of transport such as rail, road and sea freight.

This, and planting trees to offset emissions, are positive steps, but are they enough? Can a sport whose global partners include Saudi Aramco, the world's largest oil producer, and Emirates, the largest airline in the Middle East, do more?

A newer report is currently in progress and is expected at the end of this season, or at the start of the next, but F1 told DW that it is "committed to reducing its carbon footprint across all areas of emissions, and is supported on this journey by our Commercial Partners."

F1 show will go on

In the meantime, the races will go on. Next season a record 23 events will be on the calendar as the 10 F1 teams fly around the world to 21 different countries. Can Formula One still deliver on all the promises of sustainable change in the face of a record season? Furthermore, is it not somewhat perverse for Formula 1 to contribute to climate change by flying around the world to places at the forefront of climate change?

Three years ago, Arnoldo Kramer, the former chief resilience officer for Mexico City — where the latest F1 race was held — told The New York Times that climate change had become "the biggest long-term threat to this city's future." The Hard Rock Stadium in Miami, around which the newest F1 race is set to be held next May, stands just 10 feet (3.05 meters) above sea level.

Drivers and team principles are well aware the sport needs to change. Sebastian Vettel has repeatedly asked for F1 to do more when it comes to sustainability, and Lewis Hamilton's long-standing commitment to environmental causes are to be applauded. But despite F1's recent efforts, the sport which built their careers is still becoming increasingly detached from the pressing reality of our time.

Clearly, F1 is becoming more and more popular, but the most expensive traveling circus in sports must also deliver on its promise to dramatically change its act.