Formula One: Verstappen holds off Hamilton to extend lead

Max Verstappen fought back from a shaky start to hold off the challenge of title rival Lewis Hamilton and win the US Grand Prix. As a result, the Dutch driver extends his lead over the reigning champion. 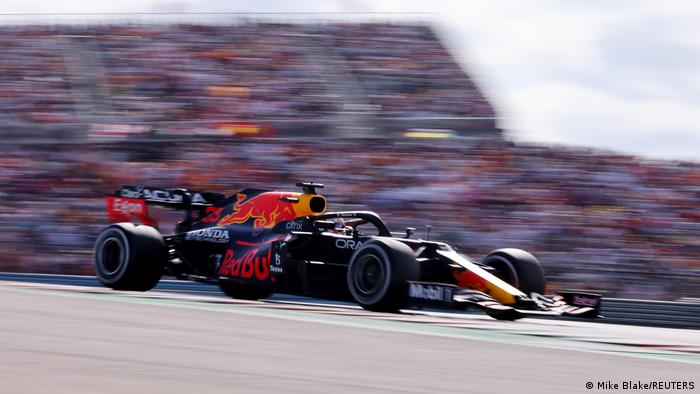 A poor start would not stop Max Verstappen in Texas

He was forced wide and overtaken on the first corner, but Max Verstappen held his nerve, and his pole position, to win the United States Grand Prix on Sunday in scorching conditions.

Verstappen was passed by Lewis Hamilton in a dramatic start in Austin but used pit-stops to regain the lead. He now looks the favorite with five races remaining of the season.

Defending champion Hamilton overtook Verstappen at the start with the 24-year-old going off the track momentarily as a battle that featured some harsh words earlier in the week took another turn.

Hamilton made ground back as the laps mounted up, but the anticipated late challenge never quite materialized with Verstappen holding on in front of 140,000 fans and extending his lead to 12 points despite Hamilton claiming a bonus point.

"He did a great job today. It was such a tough race," said Hamilton. "I got a good start and gave it absolutely everything but at the end of the day they just had the upper hand this weekend,”

Verstappen's teammate Sergio Perez came in third, with Red Bull starting to threaten Mercedes' strangehold on the constructors' title. "We did go aggressive and I was not sure it was going to work, but the last few laps were fun. Super happy of course to hang on," said Verstappen after the race.

While Vertsappen's recovery was impressive in a race where few drivers made significant progress from their starting position, his Red Bull teammate Sergio Perez did well to hold on to third despite a malfunction that left him unable to drink water in temperature that came close to 40 degrees.

"I ran out of water! I couldn't drink at all, it got pretty difficult! I was losing strength towards the end."

Sergio Perez, on his hydration issues.

Standings after US Grand Prix