Valtteri Bottas won from pole to flag in Turkey while his Mercedes teammate Lewis Hamilton ended the race feuding with his team over a decision to pit. As a result, Max Verstappen extends his lead in the title race. A dejected Lewis Hamilton, now behind in the title race, walks off the track in Istanbul.

A late decision by Mercedes to pit may have cost Lewis Hamilton vital points in the title race as he could only finish fifth in Turkey, despite a grid penalty that meant he had to fight his way through the field from 11th on the grid.

Hamilton made a good fist of it but when he was instructed to pit onto the intermediate tires on lap 50 — with eight laps to go — the seven-time world champion questioned the decision. Hamilton complied but the tires failed to have the impact Mercedes had hoped for, forcing the Briton to settle for fifth place.

The race was won by Valtteri Bottas, Hamilton's Mercedes teammate. The Finn started on pole and held off pressure from Red Bull's Max Verstappen and Ferrari's Charles Leclerc, even clocking the fastest lap at the end. It was a first win for Bottas in 2021 and quite possibly his last for Mercedes before moving to Alfa Romeo next year. 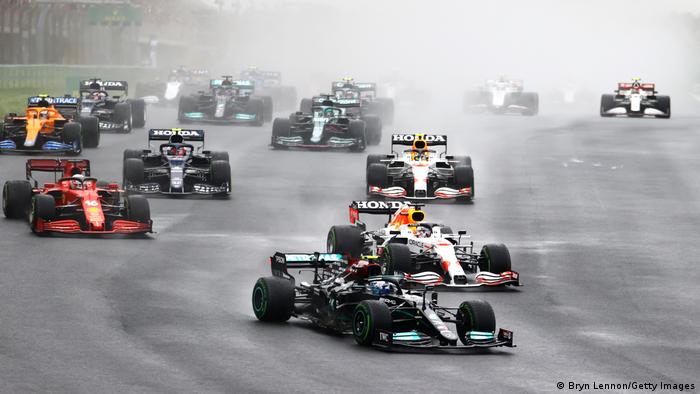 Verstappen, Hamilton's chief challenger for the title this season, finished in second place to reclaim the lead in the overall standings. The Dutchman has a six-point cushion with six races to go. Had Hamilton not pitted, the lead would likely have remained at a paper-thin single point.

Next up on the calendar is the United States Grand Prix at the Circuit of the Americas in Austin, a track where Hamilton has won five times in his career.

Carlos Sainz (Ferrari): The Italian started from 19th place on the grid after a less-than-ideal qualifying session and still managed to finish in the points with an 8th place finish. If it wasn’t for a poor pit stop, he would have finished even higher.