How is Bangladesh′s Digital Security Act muzzling free speech? | Asia | An in-depth look at news from across the continent | DW | 03.03.2021

Despite mass protest following the death of the writer Mushtaq Ahmed in prison, authorities in Dhaka have said they will not revoke the act. 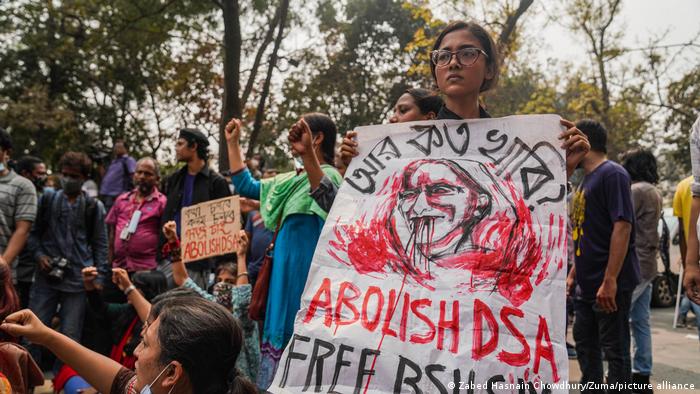 A protester in Dhaka after the death of Mushtaq Ahmed

Protesters have taken to the streets of the Bangladeshi capital following the death of a writer in a high-security prison on February 25.

Mushtaq Ahmed was arrested 10 months ago under Bangladesh's Digital Security Act (DSA), which allows security forces to carry out arrests without a warrant of anyone criticizing the government online.

Ahmed was arrested for comments he posted on Facebook criticizing the government's response to the coronavirus pandemic in May. His bail petition was rejected six times. He was sitting in pretrial detention when he died.

Although the circumstances behind the sudden death of Ahmed are not yet clear, protesters are demanding justice, as well as the release of other prisoners who have been arrested under the DSA. They also want the government to repeal the act.

Shocked by the news of Ahmed's death, Bärbel Kofler, Germany's federal human rights commissioner, called on Bangladesh's government to conduct "an independent inquiry" into the circumstances of Ahmed's death.

"Freedom of speech is an essential human right and should not be compromised by security legislation," she wrote on Twitter.

What is the Digital Security Act?

Bangladesh's Parliament passed the DSA in late 2018 following sectarian violence sparked by posts on Facebook. However, the wording is vague and its provisions broad.

For example, it criminalizes engaging in "propaganda" against the "spirit" of the 1971 Bangladeshi war of independence. It also criminalizes criticizing Bangladesh's national anthem, the national flag and the nation's founder, Sheikh Mujibur Rahman, father of Prime Minister Sheikh Hasina.

Those found in violation of the law face hefty fines and lengthy jail sentences, even life imprisonment for certain repeat offenses. Arrests under the act can be made without a warrant.

Citing data from Bangladesh's Cyber Crime Tribunal, Amnesty International reports that about 2,000 cases have been filed under the DSA, with journalists often targeted. Ten newspaper editors faced legal charges under the act for critical reporting on leaders of the ruling Awami League party in 2020.

Ali Riaz, distinguished professor of political science at Illinois State University in the US, told DW that provisions in the DSA pose a threat to fundamental rights enshrined in the Bangladeshi constitution and international standards of freedom of expression.

"The law has not been made to protect the citizens, but rather to serve the interests of the ruling party and the government," he said.

"It has deliberately incorporated vague and ambiguous concepts, which allow the government to interpret them as they wish and use as pretext to silence any critical voice," he added.

Government has no plan to scrap DSA

Despite street protests and international condemnation, Bangladesh's government has shown no interest in scrapping the act.

Instead, the police have used excessive force to disperse protesters in Dhaka following Ahmed's death, with reports that at least 35 people were injured and seven arrested.

Expressing concerns about the police action against the protesters, Michelle Bachelet, UN high commissioner for human rights, has urged Bangladesh to review the DSA.

"Various UN human rights bodies have long raised concerns about the ill-defined, overly broad provisions of the DSA that have been used to punish criticism of the government," Bachelet said in a statement on Monday.

Bachelet also expressed grave concern about reports that another man detained under the law, the cartoonist Ahmed Kishore, was subjected to torture. She urged authorities to release everyone arrested under the act for exercising their rights to freedom of expression and opinion.

Anisul Huq, Bangladesh's law minister, told DW that the government would "eliminate the hiccups of the DSA through due process."

"We won't scrap the act," he said. "We need it to ensure the digital safety of our people in the digital world."

But both Ali Riaz and Fahmidul Haq, , a journalism professor at the University of Dhaka, think that the country doesn't need the DSA to ensure digital safety, as other existing laws could be used to curb cybercrime.

"The DSA poses a serious impediment to the fundamental rights of the citizens of a democratic state. That is why the law needs to be scrapped altogether," Ali Riaz said. 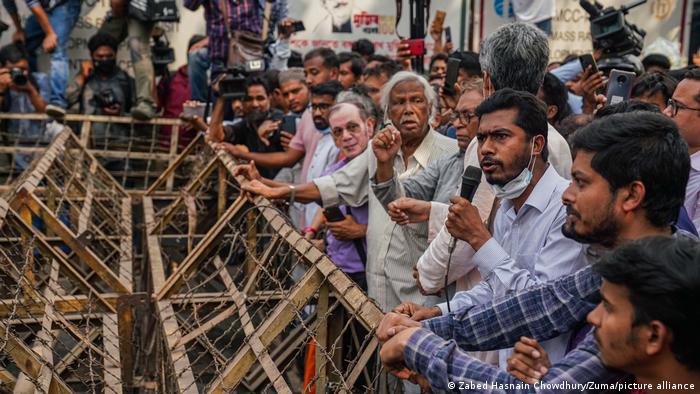 Some Bangladeshi newspapers have published editorials recently about how the DSA has limited investigative reporting on corruption involving high-level officials. The media has opted for self-censorship to keep themselves safe.

"Since its introduction in October 2018, the law has contributed to the deepening of the culture of fear. It has been successful in sending a chilling message to citizens, heightening self-censorship among journalists and choking social media," Riaz said.

Fahmidul Haq said that the media fear the law. "The local media is afraid of the DSA. Statistics suggest three lawsuits are filed every day through the act, and a significant portion target journalists," he said, adding that the current media landscape is reminiscent of Bangladesh's era of military rule from 1983 to 1990.

"Bangladeshi people used to depend on foreign news outlets for local news at that time," he said.

"What we see now in the local media is a practice of government-guided surface reporting," he added. "Bangladeshi people are consulting international outlets for local news again as a result."

Law Minister Haq doesn't think that the DSA has made media afraid.

"The law was not enacted to curb freedom of expression or freedom of the press. It won't do that," he said.