Bangladesh's government has approved the draft of a contentious digital security law aimed at tackling digital crimes. But journalists fear the proposed law could be used to muzzle freedom of expression in the country. 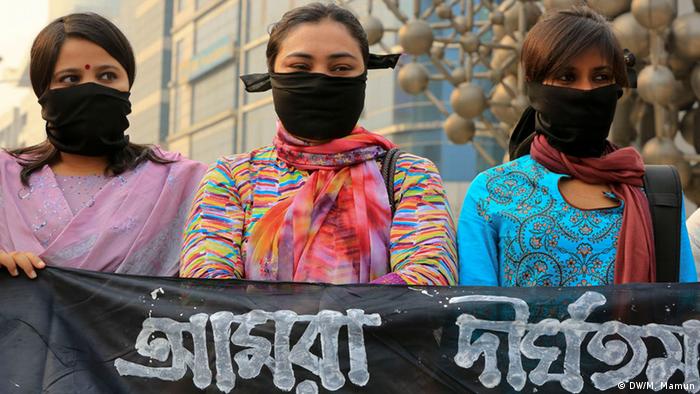 He posted this comment on Facebook with a picture of himself holding a banner with the hashtag "#AmiGuptachar," meaning "I am a spy" in the Bengali language. Like Babu, many other journalists have expressed concerns over a section of the Digital Security Act 2018 that can be used to restrict freedom of expression.

Section 32 of the proposed act considers the secret recording of any information at any government, semi-government or autonomous institutions as espionage. Many journalists and online activists, who expose government corruption by secretly recording irregularities, fear that their work can also be regarded as espionage.

If convicted for violating the provision, a person may face imprisonment of up to 14 years and a fine of about €20,000 ($24,900) under the proposed draft, which has been approved by the cabinet and is now awaiting parliament's nod. Badruddoza Babu has posted a comment on Facebook with a picture of himself holding a banner with the hashtag '#AmiGuptachar,' meaning 'I am a spy' in Bengali

The majority of lawmakers in the legislature are from the ruling Awami League party, meaning the parliament will, in all likelihood, pass any proposal approved by the cabinet.

"Investigative journalists record many things secretly. They even work in disguise. The proposed draft has been made to stop them," says Mahmood Menon, the executive editor of an online news outlet based in Dhaka.

"If the draft is passed, any journalist, academic, researcher, and online activist can be framed and may face the charge of spying when they try to collect necessary information for a report. It will narrow down the domain of journalism and free voices will be suppressed," she told DW.

'More draconian than the previous law'

The new draft is supposed to replace the controversial Information and Communication Technology (ICT) Act of 2006, which was enacted to regulate internet use in the South Asian nation.

However, Section 57 of that law has been used against journalists on many occasions.

The ICT Act granted law enforcers the right to arrest any person without a warrant. Moreover, offenses under Section 57 were made non-bailable and the maximum penalty was 14 years imprisonment. In 2017 alone, at least 25 journalists and several hundred bloggers and Facebook users were prosecuted under Section 57.

When speaking your mind is like walking a tightrope

Following widespread criticism, the government has decided to abolish the ICT Act and introduce, in its place, the Digital Security Act 2018. But experts point out that many of the ICT Act's provisions have been reproduced in different forms in the proposed new law, which still carry sentences of up to 14 years in prison.

"The proposed Digital Security Act is not satisfactory, especially as, on several points, it is even more draconian than the previous law," said Daniel Bastard, the head of Reporters Without Borders' (RSF) Asia-Pacific desk. "The still vague wording will allow the same abuses as before, benefiting those who do not want freely and independently reported news and information," he added.

Ali Riaz, a Bangladesh expert and professor at Illinois State University, shares a similar view. "The public has a right to know and the new act has brought out an ax to cut the transparency and accountability out of governance. Indeed, it is far more draconian than Section 57 of the ICT Act," he told DW.

Climate funds and corruption in Bangladesh

"Why should you do something secretly? It's unacceptable. One can never violate state secrecy," he told local media.

Corruption and irregularities in the government and private sectors have been a significant concern for many ordinary Bangladeshi citizens. And journalists often expose crimes committed by senior officials. The Muslim-majority country has often been placed on the list of the top ten most corrupt countries in the world in the past by Berlin-based Transparency International (TI), a corruption watchdog.

Mahmood Menon believes that investigative journalism will be at stake if the new draft gets parliament's approval. "Section 32 of the proposed law will go against ensuring transparency in running state affairs. No one will be allowed inside for free reporting and the government, semi-government or autonomous institutions will have chances to misuse the opportunity," he told DW.

Observers also acknowledge that strong laws are needed to ensure the security of digital information. "The laws should be carefully made so that the privacy of critical and sensitive data is properly maintained," says B M Mainul Hossain, a digital security expert based in Dhaka. "At the same time, freedom of expression should not be violated, as it is a constitutional right of the citizens of the country," he added.

Bangladeshi journalists have demanded a complete removal of Section 32 from the proposed draft to ensure freedom of expression in the country, which has been ranked an abysmal 146 out of 180 nations in RSF's 2017 World Press Freedom Index.