China resorted to a one-child policy in 1979 to limit its then-ballooning population, and then over three decades later changed it to a two-child policy. Experts say it cannot be a model for other countries. 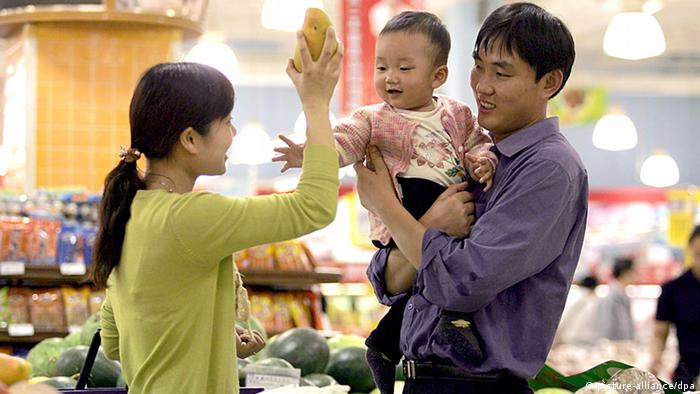 Almost four decades after China introduced the unprecedented one-child policy to curb its then-surging population, the government announced a relaxation in late 2015 and started allowing couples to have two children instead of one. It now even aims to boost the nation's fertility rate, which is one of the lowest in the world.

Since the two-child policy came into effect, in early 2016, China has recorded a jump in the number of births. In 2016, the number of births rose by 7.9 percent year-on-year, the highest increase since 2000, according to China's National Health Commission.

The commission also predicted that the number of new births would reach between 17 and 20 million by 2020. Furthermore, the two-child policy is expected to boost the number of working-age people by as much as 30 million and reduce the nation's aging rate by 2 percent.

However, some studies show that even if the predictions made by the Chinese government turn out to be accurate, the effect of the two-child policy on China's aging population will still be minimal.

According to a study done by the Australian National University, the relaxation of one-child policy would only boost China's annual GDP growth by 0.5 percent. Furthermore, it would reduce the age dependency ratio — the ratio of older dependents (people older than 64) to the working-age population (those aged 15-64) — by a mere 0.03 percent, the report concluded.

While some attribute China's looming population crisis to the one-child policy, others argue that the drop in fertility rate is a result of long-term government policies and other socioeconomic developments.

"The later, longer, fewer policy [promoted by the Chinese government in the] 1970s [was] instrumental in pushing down fertility [rate,]" said demographer Stuart Gietel-Basten. "Then through [the] 1980s, it was economic development, education, women's rights, labor force participation and urbanization that pushed fertility lower."

Nevertheless, experts regard the one-child policy as an unprecedented and unique event in human history. Feng Wang, professor of sociology at University of California, Irvine, said that the one-child policy was made possible "by the particular political context and political institutions in China." Since China was under extreme pressure to increase economic growth and use it as a basis of political legitimacy, the circumstances paved the way for the Chinese government to push the policy through with determination.

"We don't see other governments in the world place population control so central [in order] to maintain their political legitimacy," Wang told DW.

Over the years, many inside and outside China have criticized the one-child policy, although some experts believe it could have contributed to the Asian giant's rapid economic growth over the past three decades.

Wang pointed out that the enforcement of the policy allowed most Chinese families to spend less on children per capita, and that in turn helped with savings, investment and economic growth. Additionally, as families invested more on the only child's education, it helped to nurture the most educated generation in Chinese history, the expert said.

"Many of them belonging to this generation are highly educated and they can really engage in this new economy very productively," Wang added.

Nonetheless, analysts say, the one-child policy also led to countless families ending up as childless, leaving parents without any emotional and physical support in their later years.

China will face tremendous challenges due to this nearsighted and extreme policy, warned Wang. "By implementing the one-child policy, China reaped the short-term gains, but by draining the pond, it ensured that there would no longer be fish," said Wang.

The one-child policy didn't just transform China's family structure, but also resulted in massive human rights violations as the government tried to enforce it across the country. In a study conducted by Martin Whyte, Yong Cai and Wang, the scholars created a chart to showcase the increase in induced abortion and female sterilization in the early 1980s.

According to Wang, the extreme birth control programs forced many women to undergo the procedures, and the phenomenon only dialed down during the 1990s.

"The mass sterilization and forced abortions are truly incomprehensible in any way from modern point of view," said Yong Cai, a sociology professor at the University of North Carolina at Chapel Hill. "The brutal human rights violations dialed down partly because education has changed people's mindsets."

In addition to the physical aspects of the violations, Wang said the one-child policy also preached the philosophy that "human beings are just numbers." He argued that such mentality constitutes a fundamental disrespect of people, and that's why it's difficult for other countries around the world to introduce similar policies to counter rapid population growth.

"[With] the massive violation of human rights, I think it would be hard [for the policy] to [be accepted] by any country in the world," Wang noted.

Countries like South Korea and India also introduced population control programs in the 1970s and 1980s, but they didn't turn into one-child policies. Analysts say it is inconceivable that any country now would want to adopt an extreme policy like this. "The policy should not be a model [for other countries,]" Gietel-Basten told DW. "Its positive impact is questionable and the potential for negative side effects is very high."

The number of internet users in China has been rising by leaps and bounds. Those online in the world's second-largest economy equal the entire population of Europe, with e-commerce the main driver of expansion. (23.01.2017)

China will end its controversial one-child policy and ease family planning restrictions, according to its state media. The policy was introduced in the 1970s to prevent a population explosion. (29.10.2015)

An increasing number of Pakistanis are learning the Chinese language, hoping to land a job in one of the multi-billion-dollar CPEC projects. Some experts see the trend as China's cultural onslaught on Pakistani society. (21.11.2017)