The trial of ex-police officer Derek Chauvin starts Monday over death of George Floyd, which sparked an international outcry. With so many fatal police shootings, why did this slaying lead to global protests? 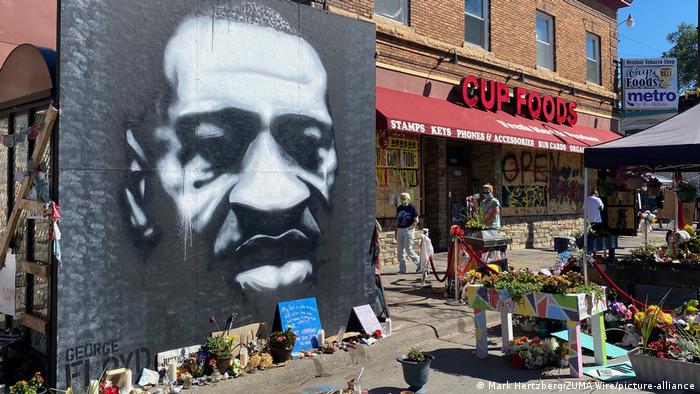 For eight minutes and 46 seconds, police officer Derek Chauvin kneeled on the neck of George Floyd, a 46-year old Black man, on a street in Minneapolis on May 25 last year. Another officer, Alexander Kueng, had his knees on Floyd's upper legs whille their colleague J. Thomas Lane gripped Floyd's handcuffed arms.

"Please, please, please, I can't breathe," Floyd gasped, pleading about 20 times. His final words reminded many of those of Eric Garner, who died during a police chokehold in 2014.

When Floyd fell unconscious, the officers didn't move. Chauvin and the other officers released their grip only when an ambulance arrived — nearly two minutes after Keung first reported he could not find a pulse, according to prosecutors. Floyd was later pronounced dead at a local hospital.

George Floyd was unarmed. At the time, according to a statement by the Minneapolis Police Department, he appeared to be intoxicated and "suffering medical distress." The police said they were responding to a call that a man was trying to use a counterfeit $20 bill — and the description matched George Floyd. Floyd was asked to get out of his car, and  police said he "physically resisted officers" after he stepped out of the vehicle.

They sat him down on the ground and later tried to place him inside a police car. Eventually, the officers pinned him down on the street in a position that proved fatal. During that time, George Floyd cried out for his dead mother — and pleaded that he didn't want to die.

While George Floyd wasn't the only black person to die at the hands of US police officers, the images of him being slowly suffocated were quickly seen around the world. His death sparked renewed protests in support of the Black Lives Matter movement, which was established in 2013 after the aqcuittal of George Zimmerman, the man who shot and killed Trayvon Martin, an unarmed Black teenager, in Florida.

Thousands of people took to the streets in Minneapolis, in cities across the US and around the world, in response to Floyd's death.

At first, tens of thousands of protesters in the US marched peacefully, but a couple of days after George Floyd's death, some demonstrations turned violent. There were reports of lootings, vandalism and even shootings. Cars were set alight and there were clashes with police. The National Guard was mobilized, as government officials — including President Donald Trump — accused some protesters of engaging in "domestic terrorism." Anti-racism protests went global after George Floyd's death, as seen in this Berlin protest in July 2020

Meanwhile, in other countries across the world, statues deemed to symbolize racial injustice were taken down and protesters demanded that anti-racism efforts be stepped up.

In Belgium, protesters defaced symbols of Belgian King Leopold II, who colonized the Democratic Republic of Congo. Under Leopold II's rule, millions of Congolese people were killed. In the UK, demonstrators tore down a statue of Edward Colston, a slave trader in the 17th century. In Germany, some of the largest protests outside the US took place, demanding a reckoning with its own colonial past and its stance on racism in the country.

A critical mass saw 'something is wrong'

The reasons why George Floyd's death sparked such a resounding national and international public outcry are manifold, says David Elcott, a professor at the New York University specializing in community building and social movements.

"One reason is cumulative. In enough places around the country," he says, "there were enough circumstances that seemed suspect that a critical mass began to see that something is fundamentally wrong."

Elcott compares the effect to titration, a chemical method for determining the concentration of a liquid. "You'd have a clear liquid and you add one drop, and two drops and three drops, and nothing happened. But the fourth drop, and suddenly the entire thing changes color."

In addition, the video that circulated of Floyd's death was simply horrifying, says Kenneth Nunn, a professor of law at the University of Florida who focuses on race relations and police brutality. "It's visually horrifying. You truly get the notion that (Chauvin) has been there before," Nunn says.

The video also shows Floyd acting in a calm way. So, factors that would diminish the sympathy of the public were not there, he says.

The death and the ensuing protests happened against the backdrop of the COVID-19 pandemic that arrived a couple months prior. In many cities, protesters violated curfews and stay-at-home orders to march in the streets.

The pandemic-related restrictions played into the wider support as well, Nunn and Elcott agree. People had little else to do, Nunn says, and were eager to get outside of their homes.

"You had a whole summer," says Elcott, explaining that, historically, it is not unusual for people to march against racial injustice in the summer months.

But despite the protests and uprisings, not much change has come about within law enforcement, says Nunn. "The problem is so long-standing. In the US, the police are trained like they are at war," he says. "We need to get to a point where the police are no longer trained to do that. But that's going to take some time, in my view, for that to change."

'Race' has no place in the German constitution — or does it?

At a time of widespread international protests against racism, triggered by the killing of George Floyd in the US, there are calls to remove the term race from the German Constitution. But not everyone agrees.