Months after Belgium's Black Lives Matter protests, the country's reckoning with its past has come under scrutiny. But some Belgian activists feel that tackling race and colonialism-related issues needs a bigger push. 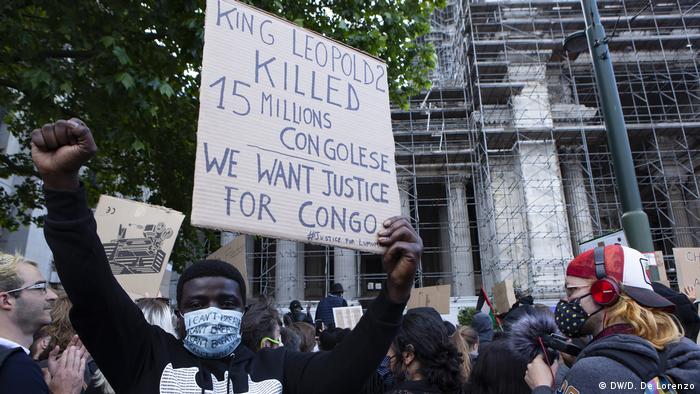 Despite widespread protests like this one in June 2020, Belgium has been slow to address its colonial past

Angry citizens clashed with police officers and even attacked the Belgian king's car with the monarch inside.

Local media reported around 150 arrests related to the night's incidents.

Fearing the unrest would continue, Brussels' security forces were placed on high alert throughout January.

A few months earlier, Belgium had revived efforts to reckon with its colonial past, following the global Black Lives Matter protests.

Belgian authorities made a number of decisions aimed at tackling the country's long-standing race-related issues: the history of cruel colonialism and the present systemic racism that continues to affect its Black citizens.

Belgium’s economy was immeasurably improved by the takeover of Congo, starting in the late 19th century. Leopold II ruled the land as his personal fiefdom, looting ivory and rubber,

Still, a 2020 survey showed that half of Belgians thought colonialism did more good than harm in Congo.

The unrest that followed Ibrahima's death showed that Belgian authorities have yet to gain society's trust on the issue of combating racism and addressing its historical causes.

Weary of the elite's reluctance to push for fundamental changes, local activists and diaspora groups have taken it upon themselves to do so.

Last summer, after widespread anti-racist and decolonization protests in Belgium, the country's federal parliament set up a commission to study its colonial past.

In July, King Philippe sent a letter to the president of the Democratic Republic of Congo expressing his ''deepest regrets'' for the ''acts of violence'' committed by Belgium, and linked that to racism today.

Having rejected the calls for a long time, Flemish schools finally announced that lessons in colonialism, neo-colonialism and decolonization will be included in their school curricula.

For many, the small steps Belgium took were necessary, yet insufficient to bring about fundamental changes. 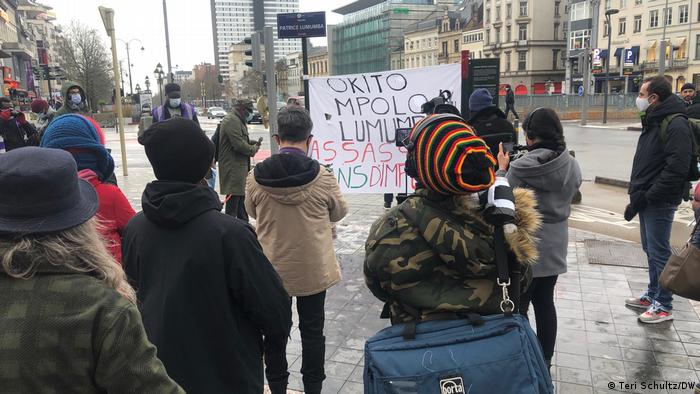 Activists gather in Brussels to commemorate the murder of Patrice Lumumba

One example was the very commission set up to examine Belgium's colonial past.

Once it was launched, criticism rained down: Not one historian or expert of Congolese, Rwandan, or Burundian origins was included.

But perhaps even more remarkable remains the protracted and unresolved story surrounding the murder of Congo's first democratically elected leader, Patrice Lumumba, one of the challenges Belgium needs to surmount in order to deal with its past and face what it did in Congo. 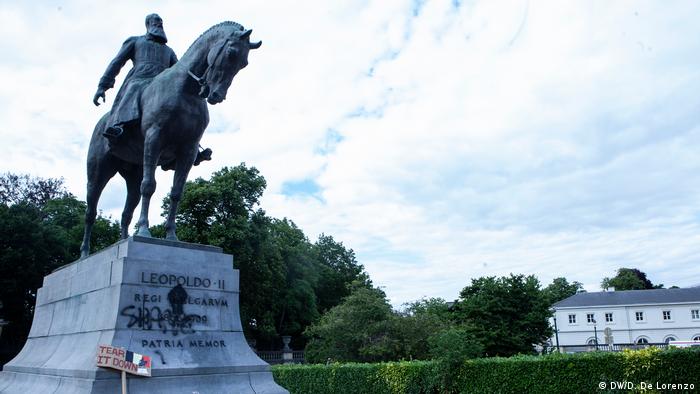 Statues of Leopold II have been attacked and sabotaged several times

On a rainy January 13, dozens of people gathered to honor the memory of Patrice Lumumba.

In 1961, the US and Belgian governments plotted his assassination and threw his body into acid after he was killed.

There is a direct link between Belgium's nonchalant attitude toward Lumumba's murder and "the colonial mentality" that continues to prevail in Belgian society to the present day, according to Brända Audima, who heads the Congo department of Intal Solidarity, an NGO working to raise awareness about the ongoing aspects and impacts of colonialism.

"What led to the assassination of Patrice Lumumba was the perception of supremacy — the mentality of 'we are better than you, we can come to your countries, take your resources and kill your leaders,'" Audima said.

In September 2020, Belgium agreed to facilitate the repatriation to Congo of the only part of Lumumba's body that was left and had secretly been kept by former police officer Gerard Soete: his tooth.

In 2000, the Belgian Parliament established a commission to "determine the exact circumstances of the assassination of Patrice Lumumba and the possible involvement of Belgian politicians."

Still, nobody has been tried yet. Most of those suspected of being involved in Lumumba's death have died of old age.

Etienne Davignon is one of the only remaining suspects. The 88-year-old is chairman of the Brussels' Bozar Museum.

A collective of Belgian rights groups and cultural and academic figures has released a statement refering to Davignon's presidency as the imposition of a Eurocentric and colonial cultural orientation that leads to a censoring of the truth.

Launching an online petition, the collective has demanded that the authorities replace him with a "person who would allow artists to tell everyone's story, not just those of the ruling classes." 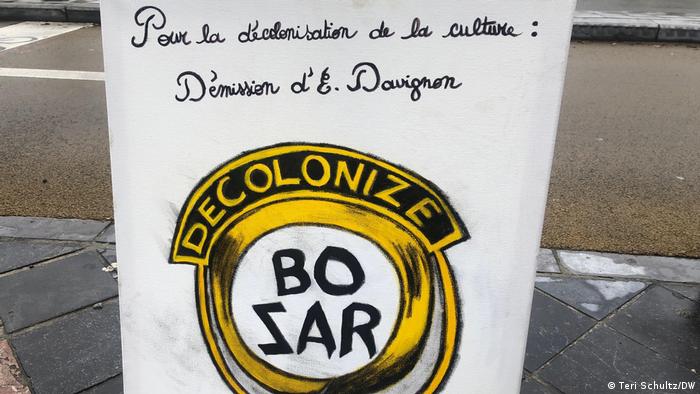 Activists have called on authorities to dismiss Etienne Davignon, the head of Bozar Museum

"It was clear for me that [Davignon] was a collaborator of the powers in place at the time in Belgium," said Christophe Lacroix, Belgian parliamentarian and member of the Committee on Equality and Non-Discrimination.

"This issue has to be addressed at some point," he said.

"We need to take responsibility for that dark period of Belgium's history ... [when] certain members of the Belgian government wanted to keep control of this colony [Congo] even though it had been granted independence," he added.

Brända Audima believes the efforts to even up the past should primarily focus on preventing similar brutalities from happening. "There should be consequences [for colonial crimes]; it is not enough to say what happened was bad," she said.

Audima points out the fact that none of the companies that extracted Congo's resources for decades have agreed to pay reparation yet, despite the fact that historians — and Belgian authorities — have confirmed their engagement in the destabilization of the country and crimes such as violent repression and using forced labor. 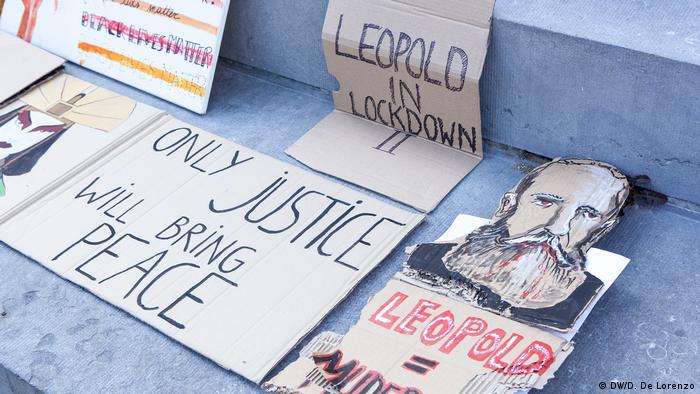 Activists have called for actions that brings substantial change

In Brussels, Lumumba Square — and the small sign there that recounts his story — are among the few monuments that showcase the brutality of Belgium's colonial rule in Africa. The little square that hosts the murdered leader's memorial was named after him only in 2018.

The rest of the city is adorned with statues and memorials meant to glorify Belgium's past. For example, figures of and references to the controversial King Leopold II — whose ruthless conquests in the Congo ultimately killed an estimated 10 million people — are plentiful.

"I remember the extensive investigations into Lumumba's murder ... despite prolonged debates and clamor nothing actually happened," said Dr. Karel Arnaut from the University of Leuven.

"That makes people skeptical about the decisions that the authorities make."

For Arnaut, who teaches and researches interculturalism, migration and minorities, the picture is not all grim, however.

"What we can see these days in Belgium is the emergence of plenty of local and grassroots initiatives aimed at combating the legacies of colonialism," Arnaut said.

He sees a renewed wave of intellectual struggle organized by researchers in Belgian universities.

These researchers intend to bring to light what has been left out of the official history of colonialism so far. "In addition to them, there are young and vibrant African diaspora groups who have recognized sustained activism as the only way to claim their rights," Arnaut said.

"This keeps me hopeful," Arnaut said.

Belgium's King Philippe has expressed his deepest regrets over his country's brutal rule in its former colony, Congo. Millions of Congolese were killed, mutilated or died of disease as the land was pillaged for its resources, particularly under the rule of King Leopold II.