How European databases failed to catch Freiburg murder suspect | Germany| News and in-depth reporting from Berlin and beyond | DW | 16.12.2016

An Afghan asylum-seeker arrested for the murder of a student in Freiburg had already been convicted of a violent crime in Greece. Why wasn't he picked up in Europe's police search networks? 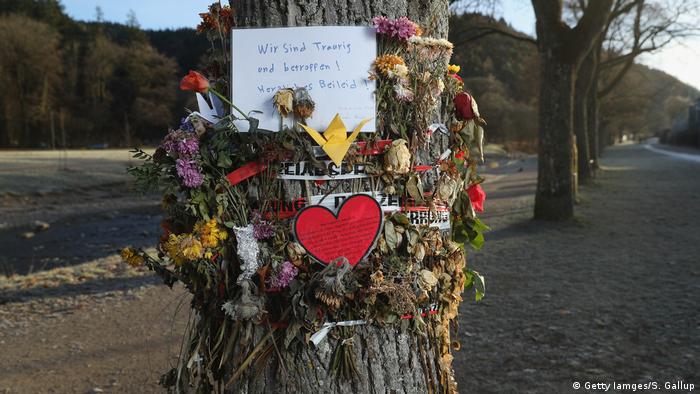 The case has caused a row among police forces and raised new demands for better networking between international databases. This week Greek attorney Maria-Eleni Nikopoulou confirmed to news agency DPA that the Hussein K. arrested in November 2016 for the rape and murder of a 19-year-old medical student in Freiburg was the same Hussein K. who was sentenced to 10 years in prison for pushing a young woman off a cliff on the Greek island of Corfu in May 2013 after stealing her bag (the woman survived after three operations and several weeks in hospital).

The Afghan asylum-seeker was released on parole only two-and-a-half years into his sentence, following a Greek law to ease prison overcrowding, and promptly disappeared. The Greek police began searching for him around two weeks later, after he failed to report to them regularly.

On November 12, 2015, almost exactly a year before his arrest, he submitted his asylum application in Freiburg, Germany, telling police he had arrived via Austria. He was fingerprinted, like all asylum seekers over 14, and the fingerprints were entered into Europe's refugee database Eurodac.

These basic facts have led to mutual accusations between the German and the Greek security forces. "This is a very exasperating incident," German Interior Minister Thomas de Maiziere told reporters on Thursday. "We will certainly have to discuss it with the Greek side." 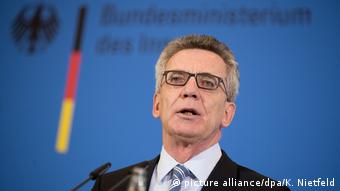 The Greeks, for their part, have been defensive. The then-Justice Minister Nikos Paraskevopoulos defended the decision to release criminals, saying the measure met European standards. "The accusation that Greece exports criminals is no more than populism," he told the "Süddeutsche Zeitung" (SZ) daily.

Security officials also pointed out that Hussein K.'s fingerprints have been in the Eurodac system since January 8, 2013, when he claimed asylum in Tyros, on Greece's eastern coast. "This data was available to all European security authorities," a Greek official was quoted in the German media as saying.

But Eurodac only stores the fingerprints and the gender of the applicant, plus the place and date of where the application was submitted. It does not include the individual's name, let alone their criminal record.

Eurodac is used exclusively to rule out asylum applications being doubled across Europe as part of the so-called Dublin procedure, as a German Interior Ministry spokesman was at pains to point out. "But since there is a policy of not sending people back to Greece, this information was irrelevant," he told DW.

Once Hussein K. disappeared following his release, the Greek authorities failed to record a lodge an international search notice either with Interpol or the Schengen information database, which would have flagged him up to the German police, the spokesman continued. 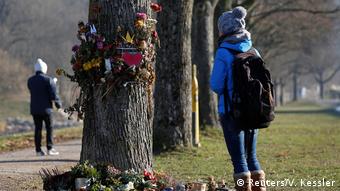 A 19-year-old student was killed on October 15

"The match with the police databases and search information systems carried out on November 12, 2015 directly after the person in question was picked up was returned negative, and did not result in an arrest, since the Greek authorities did not file a Europe-wide or international search notice," he said. "The search notice was only in Greece."

The Greek police did not respond to a DW request for comment at the time of writing.

Hussein also appears to have lied about his age on arrival in Germany. Though he told Greek authorities that he was born in 1996, in 2015, he told German police that he was 16 - probably because he had heard that treatment was better for unaccompanied minors in German refugee shelters.

Although this would have made no difference to his records in Europe's data system, the circumstance led Baden-Württemberg's Interior Minister Thomas Strobl to demand better age testing among young refugees. "That should include a standard X-ray examination of the wrist bone," he told the SZ.

Hussein is currently being held on suicide watch in a prison hospital in southern Germany.

German Interior Minister Thomas de Maiziere criticized Greek authorities for allowing a convicted Afghan criminal to travel to Germany to seek asylum. The man is currently under arrest on suspicion of rape and murder. (15.12.2016)

Greek Prime Minister Alexis Tsipras has seen a visit to Berlin overshadowed by ructions over bailouts for Greece and a teenage murder in Freiburg. An Afghan migrant released from a Greek jail is suspected of the crime. (16.12.2016)