How clean is Russian football?

Weeks before the World Cup, some open questions still remain regarding the host nation's team. Was there systematic doping in Russian football? Some indications suggest as much, but nothing's proven as yet. German investigative journalist and doping crusader Hajo Seppelt can travel to Russia after all. His World Cup visa was ultimately approved — following an intervention from the German government — after Seppelt had at first been declared persona non grata in Russia, which would have prevented him from traveling there for the tournament. Yet this might not be the end of the story.

Seppelt is likely to be questioned by a Russian investigative committee on arrival if he does travel to the World Cup. The committee has said it wants information pertaining to its investigation into Grigory Rodchenkov. Rodchenkov, the former head of the anti-doping agency in Moscow, who was a key whistleblower for Seppelt in a documentary aired on German public broadcaster ARD in January.

Reporting by Seppelt and his colleagues in other countries led to Russia's track and field athletes being banned from the 2016 Olympics in Rio, and to Russia competing under a neutral flag at the Winter Olympics in Pyeongchang this year. The International Olympic Committee (IOC) issued lifetime bans on 19 Russian athletes last year. Seppelt's investigation uncovered evidence of Russia systematically switching positive doping tests for clean samples at the 2014 Winter Olympics on home turf in Sochi.

Is the football squad affected?

According to FIFA's findings published on Tuesday, the players in Russia's provisional World Cup squad are not known to have failed any doping tests.

However, Richard McLaren, the author of the 2016 report that supported Seppelt and his colleagues' findings, said it appeared likely that had Russia employed a similar system in football. At Sochi, McLaren's report said, failed doping tests were swapped for clean samples through "mouse holes," with Russia apparently having a clean urine bank. The World Anti-Doping Agency (WADA) told FIFA late last year that of the 157 Russian football doping samples it had analyzed, 34 might have been manipulated.

An article published in Britain's weekly The Mail on Sunday reported that everybody on Russia's 2014 World Cup squad was on a list of 1,000 athletes whose doping tests had been doctored on the order of Russia's sports ministry. Deputy Prime Minister Vitaly Mutko, who is no longer Russia's sports minister, rubbished the report at the time.

FIFA said on Tuesday that it found no past evidence of failed doping tests against the current World Cup squad and would close its investigation into them. Some other Russian players remain under investigation.

Seppelt told ARD after Tuesday's news that he was unimpressed by FIFA's findings: "We asked FIFA in the past weeks whether they had tested the suspicious samples for all banned substances and for all banned methods," Seppelt said. "We received and still have received no answer from FIFA. Only then would their retroactive tests have any real meaning." 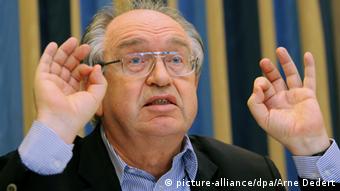 "This is institutional corruption, but of course that pervades the entire history of FIFA," Franke told DW. "In football it's all been done before, only nothing has been done about it. For example in the case of Juventus [in the 1990s], when investigations were strung out for long enough that the statute of limitations on the charges eventually passed. And just before a World Cup, allegations of doping would be an unwelcome distraction."

On a visit to Russia in December, FIFA President Gianni Infantino said he had no interest in the doping discussion without first having seen proof of any wrongdoing.

"I don't, and FIFA doesn't, participate in any speculation about any situation," Infantino said. "So far all the tests we have conducted — be it at the World Cup in 2014, at the Confederations Cup, the Euros, in club competitions — have been negative. And these tests were not carried out in Russia. All the tests were carried out outside Russia, by non-Russians."

Infantino concluded that FIFA's position was clear and also unchanged: "If it turns out anyone has committed a rule violation, or doped, then there will be sanctions."