How China′s climate revolution can stop global warming | Asia | An in-depth look at news from across the continent | DW | 30.11.2016

With or without the cooperation of the US government, nations around the world have begun to take collective action against climate change. Could a new cap-and-trade market in China set a global example? 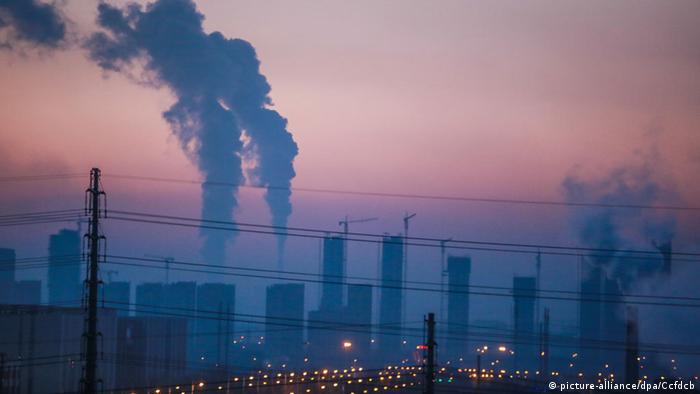 The forecast for US cooperation on global climate policy doesn't look good. President-elect Donald Trump has said that the US would drop out of the Paris Agreement and he called global warming a "hoax" in 2014 during an extremely cold winter. The scientific community tends to disagree with Trump and 2016 is projected to be the hottest on record.

China is the world's heaviest emitter of greenhouse gases, and after an ongoing public health crisis resulting from a coal-fueled industrial revolution, it is taking sweeping measures to reduce its emissions. Conversely, in 2012, Trump said on social media that man-made global warming was "created for and by the Chinese to make US manufacturing non-competitive."

Rather than US businesses being harmed by a Chinese climate conspiracy, it seems they are more likely to be impacted by Chinese climate innovation, if skepticism and protectionism prevent new policies and innovation from taking root at home. US-led environmental protection and emissions reduction initiatives will have to persevere in a hostile political climate, while China is fostering a nationalized regime of progressive climate policy.

In 2017, China will open its emissions trading system (ETS), which will become the largest cap-and-trade market in the world in terms of total tons of carbon. This market could provide an example for the rest of the world, if they can get it right. 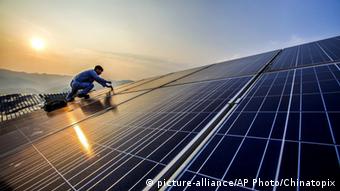 China is a global leader in solar power technology

A cap-and-trade system gives polluters economic incentives to produce less greenhouse gases by allowing them to monetize the difference when their emissions are less than those set by the cap. According to figures from the China Carbon Market Monitor, as of June 30, 2016, the carbon market for the seven ETS pilot projects had accumulated a trading volume of 94 million tons of carbon.

Climate action - made in China

Although innovation in carbon markets is heading to China, cap and trade was invented in the Untied States. The first cap-and-trade market in the world was the Chicago Climate Exchange (CCX), which was launched in 2003 and pioneered the development of emissions trading systems worldwide. In 2008, the CCX started the first cap-and-trade market in China, the Tianjin Climate Exchange (TCX).

Paula DiPerna is a former president of the international division of the CCX and has been participating in global climate policy negotiations since 1992, including being directly involved in forming the TCX.

"The key client, the thing that really wants some change, is the atmosphere," DiPerna told DW. "The power is the science and the markets are simply vehicles to link the science to finance."

After a national cap-and-trade bill failed in the US Senate in 2009, the US market for cap-and-trade bottomed out along with the energy and institutional knowledge that had been building up.

A new report shows that around the world, $286 billion was invested in renewables in 2015 - the most ever. But the head of the network behind the report says that's not enough to protect the climate. (01.06.2016)

"The world has lost at least 15 years of institutional knowledge, institutional momentum, financial expertise and acumen to address this problem," said DiPerna. "And if we don't start to reconcile the irreconcilable right now, we will lose all of the momentum of Paris."

DiPerna said that China could provide a motor to implement the framework of the Paris Agreements, because they have demonstrated a commitment to curbing emissions. After the TCX, China started six pilot cap-and-trade projects in preparation for opening a national carbon market.

"Everything in the world has to be redesigned, rebuilt, recreated and refit to come to terms with climate change and all of its extreme weather events," said DiPerna. "You'd be a fool not to see this as a physical capital infrastructure investment opportunity and the Chinese definitely see this."

There are many countries watching what will happen as China's carbon market sputters to a start. Government machinery has been put in place to ensure the market opens on time with strong enforcement policies and penalties.

However, institutional deficits, transparency and data reliability issues persist. It may be a few years before the effectiveness of the Chinese carbon market is apparent.

"There is a lot of pressure on civil society in China to deal with the environment and climate change. So I think for this policy the government is going to pull out all the stops," Jeff Swartz, Managing Director at the International Emissions Trading Association (IETA), told DW. He added that China could set an example for other nations interested in developing carbon markets.

"If China gets emissions trading right, and masters it, think of the trickle-down effect that will happen in Southeast Asian countries like Vietnam or Malaysia," said Swartz. "Or think about what South Africa, Brazil, Turkey or even Russia might consider. Many countries will look at what China is doing and say, 'I wonder if we could do that or join in on that.'"

China has the most developed supply chains and the lowest production costs in the world and carbon-capping policies will not change this. In fact, globalized supply chains mean that industry in the United States and Europe is going to be paying indirectly into China's carbon market. 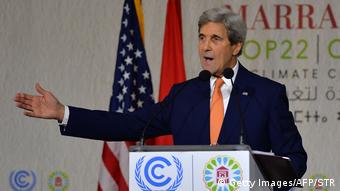 At the UN climate conference in Morocco, US Secretary of State John Kerry said that US climate commitments would not be reversed

"No American company is going to walk away from China because they are paying an indirect carbon price in China's carbon market," said Swartz. "Because their factories and their goods, which are all coming from China, are all joint ventures of Chinese companies that are probably going to be included in the national ETS. I have members who are already trading in the pilot markets and the national market because they own refineries or chemical plants and these are not Chinese companies. These are mostly European or American companies."

DiPerna said that the Chinese carbon market could eventually include an opt-in clause that could provide incentives for outside actors to participate.

"Any company that is well led wants to understand emissions trading," she said. "They'd be foolish not to. Companies all over the world can take a look at this and say 'we want to buy into this.'"

China is also a global leader in developing renewable energy, especially in high-tech solar cells and even in the production of modular nuclear reactors in cooperation with North American startups. Next year in June, China will host the Clean Energy Ministerial - the largest gathering of energy ministers in the world - to discuss clean energy.

Limitations of cap and trade

"The EU ETS, Regional Greenhouse Gas Initiative and California systems are all oversupplied with too many allowances and prices much lower than policy makers expected," he said. "These prices are not high enough to provide an incentive for emitters to reduce emissions."

The Chinese carbon market will face similar problems, although a strong national regulatory structure could intervene to adjust prices. "If I were advising the Chinese government as they set up their national emissions trading scheme, my number one recommendation would be to establish a floor and ceiling on the price of carbon," Mark Thurber, Associate Director at the Program on Energy and Sustainable Development at Stanford University, told DW.

"Carbon markets are inherently volatile because emissions are affected by so many variables," he added. "As long as there is a floor and ceiling price, companies have some certainty and can plan their investments in emissions-reducing technology accordingly."

The experts agree that it is too early to tell what impact a Chinese carbon market could have. If it is successful, at least it will potentially prevent China from pumping as much greenhouse gas into the atmosphere as it currently does.

Whether China can start a global climate club with other carbon markets is also speculative. "China will have enough challenges working out the startup bugs in its own scheme," said Thurber. "They seem unlikely in the near future to make their system transparent enough to facilitate linkage to another system."

In the US, with or without Donald Trump's capricious Twittering, climate policy will continue with state-level and private initiatives. US leadership on the global level, if we are to believe what the incoming presidential administration has indicated, remains uncertain.

"Hopefully US businesses, sub-national jurisdictions, scientists and other groups will continue to play a positive role on global climate issues even if leadership is absent at the federal level," said Thurber. 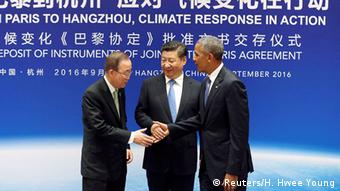 As a veteran of the fight against climate change, Paula DiPerna said that the will to take action does not need to be based on politics or nationality. She sees the Paris Agreement as a blueprint that gives countries and companies cross-border leeway to form their own strategies in contributing to the collective goal of keeping the average temperature of the earth from rising over the next century.

"The political structures are falling more and more behind the innovation structures, and at the end of the day, as long as the carbon is being removed from the atmosphere, we don't have to care if it is through economic or political incentives," she said. "Regardless if innovation and market-based decarbonization is happening in the US or China, supranational cooperation is key for developing creative solutions to fighting climate change," she added. "I think what is necessary is for people all over the world to come together in a creative manner and create a map on how to get from A to B."