How Chile escaped the doldrums to become among the world′s best | Sports| German football and major international sports news | DW | 01.07.2017

How Chile escaped the doldrums to become among the world's best

Chile are aiming to win a third title in as many years and have claimed a host of famous wins. Their midfielder Arturo Vidal believes one more over Germany will make them the best in the world. How did they get here? 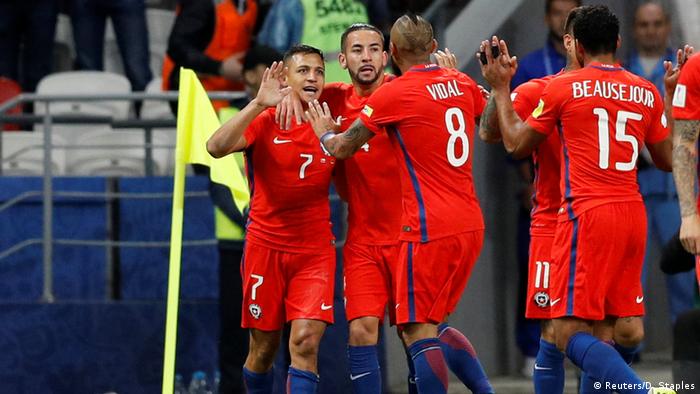 "We admire Chile. It's a small country with eight or nine million people. And they've managed to win the Copa America against Argentina and Brazil." The population is in fact 17-and-a-half million, yet Joachim Löw's pre-Confederations Cup final analysis has substance: Chile have emerged from the international wilderness to play some of the most innovative, relentless football of modern times. They have, in fact, re-invented the guide book for international football.

If the South Americans beat Germany on Sunday, it will be their third international honor in as many years, after Copa America wins in 2015 and 16. According to their midfielder Arturo Vidal, victory over Germany would prove beyond doubt that the Chileans are the best national team around. "We have proven our value by beating Argentina and Portugal," the Bayern Munich man said on Saturday. "But if we beat Germany, we will prove we are the best in the world." 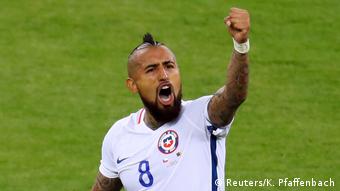 From low to El Loco

Chile had made just one appearance at the World Cup (1998) over two decades and were close to rock bottom in 2007. That was the year they turned to eclectic Argentine Marcelo Bielsa, described as the best coach in the world by Pep Guardiola. Bielsa struggled initially to reverse the trend but soon found a fast-paced, attacking style, along with some classy players capable of executing his ideas, and guided Chile through their first steps on the path to revival.

Bielsa led Chile to the 2010 World Cup in South Africa and, while they went out in the last 16, there were plenty of positive signs. His departure in 2011 left a bitter taste in the mouths of many Chileans, but it would be for the best. Compatriot Jorge Sampaoli was handed the reigns, refining Bielsa's gung-ho approach to integrate a more systematic pressing game with a lethal touch.

At the 2014 World Cup, Chile's performances were, at times, sensational. A defeat on penalties to Brazil, again in the last 16, meant they bowed out much earlier than their performances had deserved, but Sampaoli's side recovered to win the country's first-ever Copa America on home soil. That 2015 win propelled several players to new heights, with Charles Aranguiz heading to Bayer Leverkusen, Eduardo Vargas earning a move to Hoffenheim and Alexis Sanchez stepping up a gear at Arsenal. It was followed up in 2016 with another Copa America championship at the competition's centenary edition in the United States. 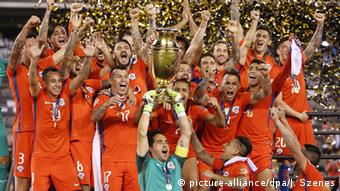 Sampaoli became a wanted man and left for Sevilla in June of that year to be replaced by Juan Antonio Pizzi, another Argentine. The current boss has built further on the foundations laid by Bielsa and Sampaoli and added a more disciplined, patient approach that serves them well at the highest level. Not as breathtaking as previous iterations, Pizzi's team nevertheless make the most of their recently-gained winning experience. "I'm taking advantage of what Sampaoli and Bielsa did," said Pizzi in an interview with Spanish newspaper AS.

The hallmarks of his predecessors' influence remain though, as Germany found out in the 1-1 group stage draw. "Chile are a very experienced team with a lot of automatisms. We need our best performance to win. Tactically, Chile are one of the most flexible teams of the world. They press well and win the ball early," Löw explained at his pre-final briefing in Saint Petersburg.

Many have questioned the importance of the Confederations Cup. But Chile, with an ageing golden generation and dreams of World Cup success next year, aren't taking this tournament lightly. Victory in Russia, the prelude to another crack at international football's biggest prize, may be the difference for the South Americans. If they can turn two titles in a row into three, they may just be able to turn three in to four.