How a church in Germany posthumously reinstated a gay clergyman | Germany | News and in-depth reporting from Berlin and beyond | DW | 02.09.2020

How a church in Germany posthumously reinstated a gay clergyman

A Protestant church in Berlin has surprised many with an admission of past guilt and a promise of future change by rehabilitating a gay clergyman, who had been persecuted by the Nazis. 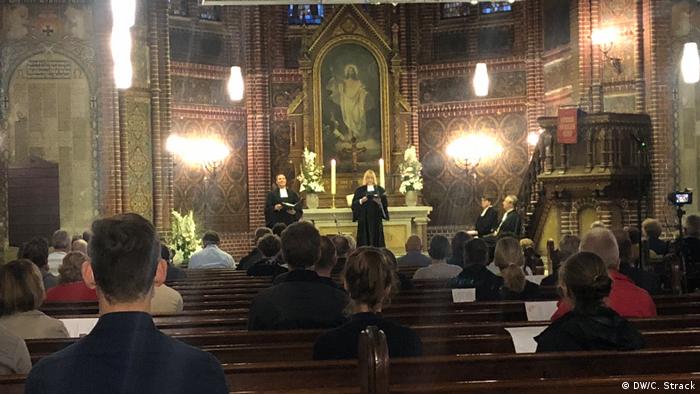 At Berlin's Immanuelkirche church, the evening's ceremony is primarily dedicated to one long-deceased Protestant pastor.

"Revoking the ordination rights of Reverend Friedrich Klein on January 20, 1943, has been recognized as an injustice and is declared null and void," Protestant Berlin Bishop Christian Stäblein tells the congregation.

He's speaking about one ruling and one man, but his words betray how much further the issue goes. After more than 75 years, the comments are akin to an admission of past guilt and a promise of future change. 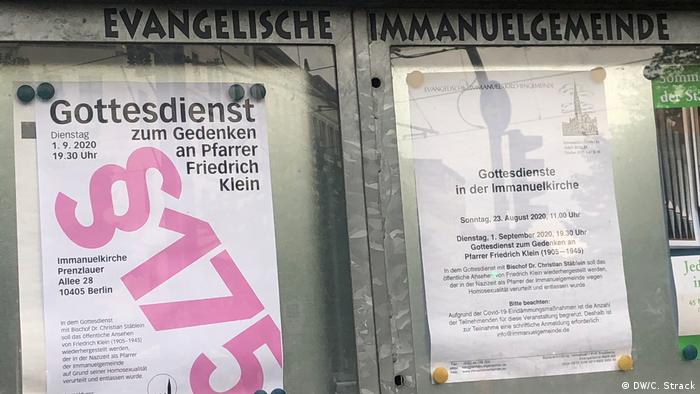 Reverend Friedrich Klein was a gay man who lived in Germany during the Nazi era. A Third Reich military tribunal convicted him in 1942 on charges of homosexual activity.

Germany's Protestant church of the time, brimming with willing anti-Semitic and homophobic accomplices to Hitler's brutal regime, followed up that court verdict by defrocking Klein a few months later. Late in the summer of 1944, somewhere on the Eastern Front, the former reverend turned conscripted soldier's trail went cold, like so many hundreds of thousands in that era.

First posthumous 'rehabilitation' of its kind

In early September 2020, more than 75 years later, Friedrich Klein is now back in the spotlight in Berlin's Prenzlauer Berg district. Berlin's Protestant Church is the first in Germany to formally "rehabilitate" and re-ordain a gay pastor persecuted by the Nazis and his colleagues of the time. Nobody knows for certain exactly how many cases like Klein's there were in that era.

Read more: What are the main differences between Protestants and Catholics

The gloomy church building, around half an hour's walk east of the Reichstag Parliament building in Berlin, is one of the few in Berlin to barely sustain any damage during the Second World War (1939-1945). It's reminiscent of the era in which Reverend Klein would have preached here. It has not been renovated over the years and has barely even had the odd lick of fresh paint. 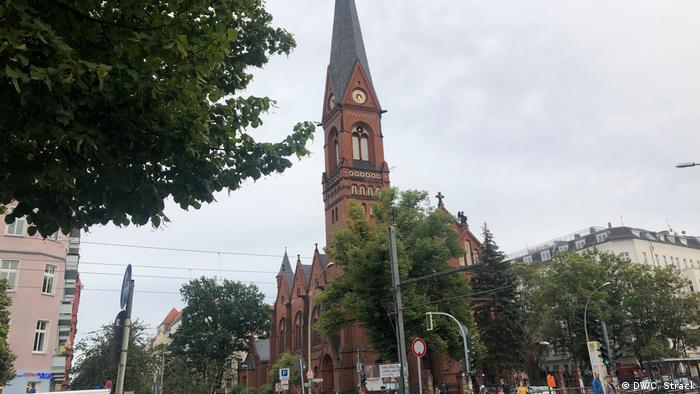 Discovered more by luck than judgment

In 2018, the Immanuelkirche congregation celebrated the 125th anniversary of its construction. Before the anniversary, current pastor Mark Pockrandt leafed through some old archive files. This was when he stumbled across the story of Friedrich Klein, a man whose photo and likeness have been lost to history at this point.

This very church community is rather emblematic of Germany's Protestant Church during the Nazi era. Klein, born in 1905 in Homburg an der Saar, himself became a member of Hitler's party, the NSDAP, in June 1933. That probably explains why those responsible at the church plumped for him at the time. The congregation itself was pervaded by national socialist sentiment.

The group calling itself "German Christians" (Deutsche Christen) was influential in the community. Nazi party members and card-carrying anti-Semites were very much part of the clergy.

Klein moved to Berlin and this Nazi-friendly congregation, but soon started to feel alienated there. Another clergyman at the church, who joined in 1937, was Johannes Schwartzkopf. He was not an NSDAP member, rather someone who tried to stand up for the persecuted during that era. A commemorative plaque at the church, installed for the 2018 anniversary, honors these endeavors.

And according to current pastor Pockrandt, Klein supported Schwartzkopf in them. 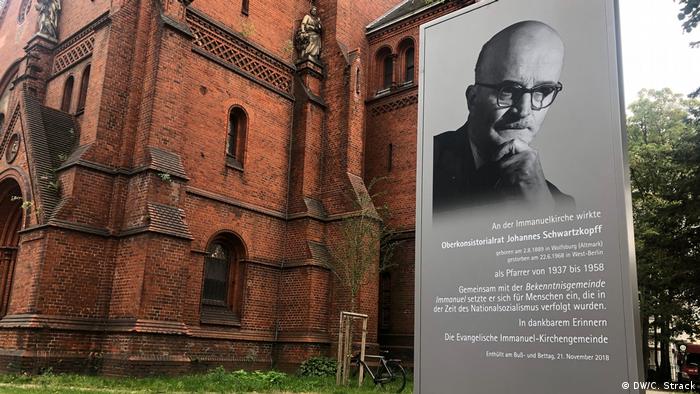 From prison to the Eastern Front, and probably an unmarked grave

Eventually, Klein's sexual persuasions became apparent. The Nazis convicted him, and his church stood by and watched. Initially, Klein was sent to the military prison at Torgau an der Elbe.

But by July 1944, with the German war effort crumbling on all sides after the D-Day landings, his sentence was "suspended" in exchange for him accepting military service on the Eastern Front.

Prisoners granted this supposed mercy were very much destined for front-line combat as part of the deal. Klein is likely to have died within a few days of his deployment, somewhere near what was then Leningrad and is now St. Petersburg on the Baltic Sea.

Klein suffered and died, fundamentally, because of his sexuality.

"Because of this unjust treatment, much suffering has befallen people who wanted to live and to love differently and who were discriminated against in a dreadful way," Bishop Stäblein says at the ceremony.

He doesn't mince his words, and he also pledges that Berlin's state church organization will pursue other past cases. Above all, he says, the church will never again stay silent when confronted by such injustice. 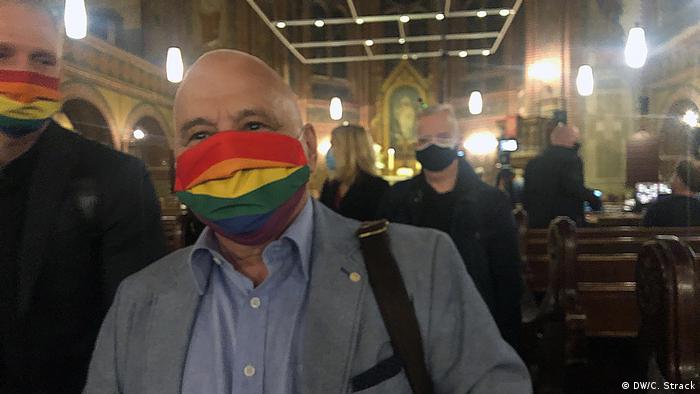 Lothar Dönitz is an activist engaged in LGBT+ church groups

First case, but not the last

The Berlin church group's official responsible for the culture of remembrance, Marion Gardei, says the city-state church wants "to continue pursuing the rehabilitation of all homosexual victims." They intend to do more research, to prepare a theological statement on the issue, and to set up an advice body for present-day complaints or queries.

It could very well be that this work will also incorporate cases from long after World War Two. After all, homosexuality between men was only formally decriminalized in Germany in 1994.

For the ceremony in Klein's honor, the Immanuelkirche is as full as is permitted given coronavirus restrictions. Between 80 and 90 guests attended, many of them older gay men. People like Lothar Dönitz, a longstanding member of a local Protestant group discussing homosexuality, who had been campaigning for Klein's posthumous reinstatement.

"I can only say that the words of the bishop have moved me deeply. I am grateful to him," Dönitz says, through his rainbow-colored facemask.

Stäblein is "surely the first bishop from a German Protestant church to have found these words." Dönitz then apologizes that he can't offer much more at this point — he's still too emotional.

Thousands of homosexuals murdered by the former Nazi regime have been remembered in Berlin. The ceremony began the capital's annual pride parade inspired by New York's 1969 Christopher Street Day (CSD).

VE-Day marks Nazi Germany's unconditional surrender in WW2. Russia celebrates it on May 9. Increasingly, President Vladimir Putin has used the day to serve his own domestic purposes.