Hollande agrees UK needs time for Brexit talks, but the 'sooner the better'

British Prime Minister May and French President Hollande have agreed that the UK needs time to prepare negotiations to leave the EU. However, Hollande has urged the talks should take place "as rapidly as possible." 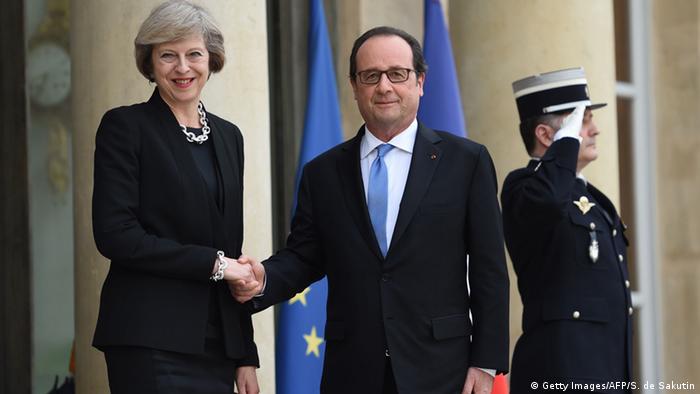 Despite pushing for fast Brexit negotiations, French President Francois Hollande said on Thursday he understands the United Kingdom will need to prepare for talks on leaving the European Union.

"There cannot be discussions, pre-negotiations before the negotiation but there can be preparation for this negotiation," he said at a joint news conference with British Prime Minister Theresa May in Paris.

"We can understand your newly formed government needs that time," Hollande said.

"But let me repeat, the sooner the better," added the president.

May once again repeated that the initiation of Article 50 - the process which triggers officials Brexit negotiations - will not take place before the end of the year. She stressed that during negotiations, the Great Britain will try to maintain close economic ties with France.

"As the UK leaves the EU we will have to determine how to maintain the closest possible economic relationship between our countries," May said.

"We are leaving the EU. We are not leaving Europe," the prime minister emphasized. "We are not walking away from our friendship with France"

During the press conference, Hollande urged that Great Britain will not be able to access the EU's single market without accepting the key freedoms of the bloc - including movement of people.

May repeated that one of the key aspects of the British vote to leave the EU depended on restricting the number of people entering the country. She said controls on migration between the UK and the bloc should be established, but wanted to find the "right deal" for trade in goods and services.

The two nations also agreed that the UK-France border agreement which controls the flow of migrants especially from the Calais area should absolutely be upheld.

'Things should not drag on'

Earlier on Thursday, Hollande urged that talks about the UK leaving the EU should begin quickly during a visit to Ireland prior to meeting with May.

"Things should not drag on," Hollande said during a visit in Dublin, warning that a delay would cause "damaging uncertainty."

During a meeting between Merkel and May in Berlin on Wednesday, Merkel said it was in the best interest of all parties if Britain had a "well-defined position" before talks to leave the EU began.

London's government must invoke Article 50 of the Lisbon Treaty to trigger a two-year negotiating period regarding the UK's departure from the EU.