H&M sits on billions of unsold clothes as profits plummet

The retail behemoth has posted its lowest numbers in over a decade. The news comes amidst an increase in online shopping, as well as a series of human rights scandals. 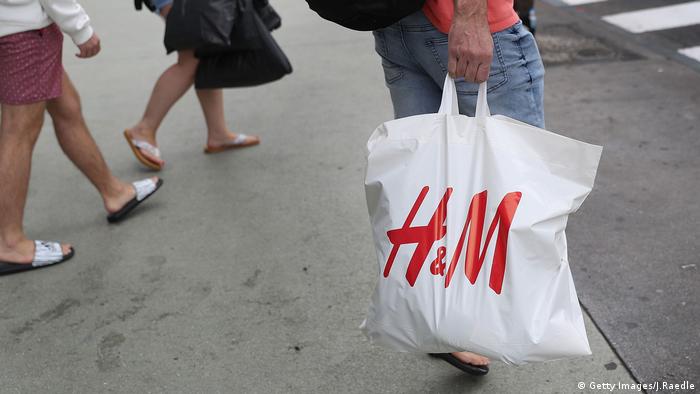 Swedish fast fashion giant H&M is not having a great 2018 — first-quarter operating profit tumbled by 62 percent to its lowest level in over a decade — and on Wednesday it emerged that it was sitting on $4.3 billion (€3.5 billion) worth of unsold garments.

"The start of the year has been tough," said CEO Karl-Johan Persson, grandson of the company's founder.

But the retailer's problem may be just as vast as its network of 4,700 shops, with many of its customers eschewing what they say are overcrowded, messy and understaffed stores for online shopping portals.

H&M has also been rocked in recent years by a series of scandals over its environmental footprint and its use of child sweatshop labor in Myanmar, Bangladesh and Cambodia.

In 2016, Swedish investigative journalists revealed that workers as young as 14 were toiling in the company's Burmese production plants for more than 12 hours a day. They found that the children were being paid as little as 15 cents an hour, which is less than half the minimum wage.

The clothing company is also the biggest buyer of textiles from Bangladesh, where it contracts some 200 factories in that country to make its clothes. After 1,129 workers died in the Rana Plaza building collapse in 2013, H&M signed on to the "Bangladesh Accord on Fire and Building Safety" — an agreement that observers say has failed to be implemented.

'The second largest polluter in the world'

Fast fashion has also come under fire for its enormous environmental impact. Accepting an award in 2015, designer Eileen Fisher remarked that "the clothing industry is the second largest polluter in the world … second only to oil."

While Fisher's remark is debatable, the amount of clothing that is sent to landfills isn't — 10.5 million tons (9.5 million metric tons) a year in the US alone. And health effects of the toxic chemicals used in the farming and dyeing processes on garment workers and cotton farmers all over the world is well-documented, on top of the disastrous environmental impact when the chemicals get dispersed into the ground water.

This is on top of the fashion industry's carbon emissions, which are higher than some major airlines, and the massive amounts of water needed to produce cotton.

Despite creating a campaign in 2016 to promote shoppers returning their used items to H&M stores for recycling, the company's own development sustainability manager admitted that only 0.1 percent of returned clothing was reused for new textiles.

There is at least one place in Sweden that may be grateful for H&M's mountains of excess clothing, however. A power and heating station in the town of Vasteras, northwest of Stockholm, reportedly burns defective H&M garments donated by the company instead of coal in an effort to reduce fossil fuels.

Too much bureaucracy, too many regulations: Three years after its creation, the "Partnership for Sustainable Textiles" is losing members. But Germany's Development Ministry still stands by the alliance's ambitious aims. (03.08.2017)

It started with Swedish bargain fashion chain H&M, and the damage quickly spread to other Western brands

Mohammad Chotu was only nine years old when he left his village for the northern Indian city of Jaipur. Human traffickers had promised his parents that there would be a good job waiting for him.