Has VW cracked the code to overtake Tesla? | Business | Economy and finance news from a German perspective | DW | 15.03.2021

Has VW cracked the code to overtake Tesla?

Tesla has revolutionized the auto industry, building cars for the future even as legacy carmakers could barely take their eyes off the rearview mirror. But now Tesla's days as the leader of the EV pack might be numbered. 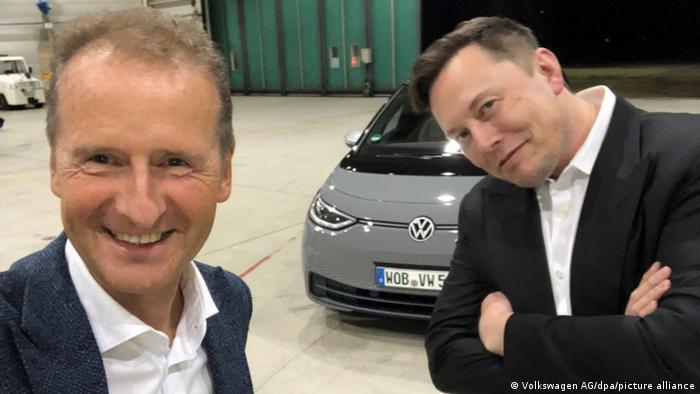 Volkswagen Group's chief executive, Herbert Diess, debuted on Twitter in January with a lighthearted jibe at Tesla's Elon Musk, writing that the German carmaker was out to capture market share from Tesla after having already conquered the first markets in Europe.

Diess appeared to be only poking some fun at Musk — the two have been friends for years and have publicly showered praises on each other keeping aside professional rivalry. But the tweet succinctly spelled out VW's desire to dislodge Tesla from its perch as the world's biggest electric carmaker and to remain a dominant force in a rapidly transforming industry.

Diess's Twitter debut was no bolt from the blue. The traditional carmaker is hoping to burnish its tech-savvy credentials as it guns for young tech aficionados — the so-called early adopters, a core Tesla constituency. Musk, a tech trailblazer, has used the platform to great effect for years, including to sell his electric vehicles (EV).

The 62-year-old VW boss has taken another leaf out of Musk's playbook. The German carmaker is holding its first "Power Day" event to update on its battery supply plans, echoing Tesla's "Battery Day." During the event, VW revealed its plans to set up six battery cell production plants in Europe by 2030 to secure supply for its electric vehicle ambitions.

Wolfsburg-based VW has been pumping in billions of euros as part of a radical strategic shift towards electric vehicles (EV) prompted by the 2015 "dieselgate" scandal that left the German carmaker's reputation in tatters. The group's eponymous brand expects all-electric vehicles (BEVs) to account for over 70% of its total car sales in Europe by 2030 and over 50% in China and the US.

The ambitious EV offensive has firmly put the 83-year-old company on track to overtake market leader Tesla over the next two years. The group's pure-electric car sales more than tripled last year to over 230,000, closing the gap with Tesla, which delivered just shy of 500,000 vehicles.

Volkswagen overtook Tesla as the biggest electric vehicle maker in Europe, selling one in four cars delivered in a year that saw EV sales soar, propped up by generous state subsidies and strict CO2 emission targets which forced carmakers to double down on EVs despite bleeding money selling them.

"There is a 100% chance that VW will overtake Tesla next year, it could possibly even be this year," Ferdinand Dudenhöffer, founder and director of Center Automotive Research in Duisburg, told DW.

The German carmaker has aggressive EV rollout plans. The ID.3 hatchback which hit showrooms in Europe last year will be followed by the ID.4 SUV and the ID.5 crossover in 2021. Seven-seater ID.6 X is also planned to go on sale in China later this year. The VW Group, including Porsche, Audi and Skoda brands, plans to launch around 70 purely electric models by 2030.

Tesla has dominated the EV market for years, cementing its lead with the arrival of the cheaper, mass-market Model 3. The 17-year-old Silicon Valley firm has managed to set itself apart from competitors thanks to its sleek-looking cars, high-powered battery tech, electric-only strategy, superior software and, above all, its emphasis on constantly innovating. Tesla CEO Musk's flamboyance and vision as reflected by his tech pursuits like SpaceX and Hyperloop have also helped the carmaker win a legion of fans.

Tesla has benefited from the reluctance of traditional automakers to embrace electric vehicles for the longest time. The few electric cars launched by them have mostly been just a plug-in version of their popular models, a major turn-off for EV customers looking for sleeker designs and superior technology interface.

Volkswagen's ID.3, the company's first offering from its dedicated electric car platform, beat the Model 3 in December to become the second-bestselling car in Europe less than four months after its launch.

A detailed analysis of ID.3 by Swiss investment bank UBS — which sees EVs to account for 50% of total new car sales by 2030, with a chance of 100% by 2040 — showed that the hatchback matched up to the Model 3, even outperforming the best-selling EV ever on several fronts. The analysts found that VW's modular car platform for manufacturing electric cars, MEB platform, is fully cost-competitive with Tesla and reaches "best-in-class energy density, efficiency and scalability."

The analysts called the ID.3 "the most credible EV effort by any legacy auto company so far." The teardown report sent VW's shares to their highest level since the emissions cheating scandal.

The UBS analysts, however, found that VW was years behind Tesla's software and battery prowess — both key aspects of an EV — ensuring that despite losing its top spot to the German carmaker in terms of cars sold, the US company would remain the most profitable EV player.

"If Tesla is the Apple of the new mobility world, leading legacy OEMs (original equipment manufacturers) like VW and Hyundai could be like Samsung," they said.

VW's ID.3 got off to an ominous start, plagued with software glitches and production delays, causing many to doubt the German company's ability to take on Tesla. The car's launch, experts say, was rushed by VW to meet the EU's CO2 emission targets.

VW has since addressed its software glitches and plans to provide Tesla-like "over-the-air" software updates every three months starting this summer. It expects to have a fully networked fleet of over 500,000 vehicles on the road in two years' time.

VW plans to invest €16 billion ($19 billion) in areas including e-mobility and digitalization over the next five years as it looks to boost its software capabilities and generate additional revenue over the service life of its vehicles through on-demand charging and energy services and other software-based functions.

UBS analysts say software is going to be the "battleground" for EV supremacy in the future, with an estimated revenue pool of $1.90 trillion by 2030.

Even as VW looks to play a catch-up game on the software and the battery fronts, its wide and stable dealer network, strong brand power, global scale and presence, and huge customer base puts it in a strong position to overtake Tesla, which is building a new Gigafactory on VW's home turf.

Jan Burgard from Munich-based auto consultancy Berylls Strategy Advisors told DW that in these areas legacy carmakers like VW are "in fact much better positioned than the new kids on the block."

VW's early success in the EV market can also be attributed to a vast pool of conservative customers, who are not willing to take big risks with new technology and would rather stick with well-known legacy players.

"On the one hand, we see that early adopters like to have advanced technology and that helps Tesla, Neo and Porsche, but they are only 5-10 % of the market," Dudenhöffer said. "90% of the market are customers who want to have a vehicle, which is safe and doesn't come with too many risks. For these customers mainstream brands like VW, Audi, Ford or Hyundai are attractive."

Despite rapidly bridging the gap between Tesla in the EV market, VW is valued only at $114 billion even after its recent gains, about a sixth of Tesla's market cap.

Auto analysts at Deutsche Bank say investors have been undervaluing the German carmaker, especially given its EV potential.

"While it is known that VW is the largest (traditional ICE) vehicle manufacturer globally, we believe that many investors miss the company could also be the largest EV maker in only two years," they wrote in a research note. "In our view, the major driver for this will likely be the MEB platform."

The analysts said VW's pure-electric car sales could exceed 700,000 vehicles this year, above their Tesla deliveries forecast. They estimate that the German carmaker's MEB platform could bring in more than €20 billion up to 2028 through its agreements to license the platform to rivals like Ford and startups like Fisker.

While the analysts acknowledge that Tesla is leading in digitalization and battery technology, they are doubtful that this advantage justifies its over $550 billion market cap lead over VW.

"We believe that VW should separate its MEB unit to give investors a fair chance to value this business separately from the rest," they wrote.

The US automaker has announced it is shedding 3,000 jobs in North America and India to cut costs and simplify processes. The company aims to accelerate its transition to electric vehicles.