Happy to Sing for Germany

As candidates from 26 countries get ready to flex their vocal chords at Riga for the coveted Eurovision crown on Saturday, DW-WORLD takes a look at Germany’s shock-haired, get-happy entry: Lou. 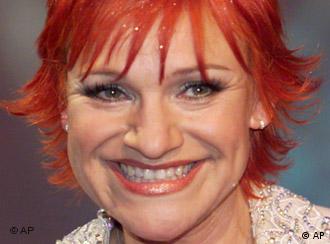 When she isn’t singing, she’s busy exercising her facial muscles in a ear-splitting grin, probably the reason why Germany’s carrot-haired entry at this year’s Eurovision song contest looks younger than her 39 years.

The effervescent Lou Hoffner, who will be belting out a peppy ditty titled "Let’s Get Happy" at the Eurovision finals in the Latvian capital of Riga on Saturday, claims the song personifies her motto in life. "It’s as if it’s made for me and actually it’s also my motto in life in all difficult situations," Lou told German news agency dpa. "It’s a song that makes one forget all worries."

Maybe, but the composer of the song is worried enough for Germany’s hopes at this year’s Eurovision. "Let’s Get Happy" after all is penned by none other than Germany's dinosaur producer and Eurovision perennial Ralph Siegel (he has written songs for 15 German candidates since 1976 with one lucky hit).

The 57-year-old composer, who announced his resignation from the music contest after last year’s disastrous performance by German candidate, and Siegel protegé, Corinna in Estonia , has decided to give the competition one more shot. Siegel, together with song-writer Bernd Meinunger, reportedly approached Lou shortly before Christmas last year with a "very special song."

"I’m not concerned about how Ralph fared last year, whether he was first or last, what’s important for me is the international Grand Prix in Riga," Lou said in a recent interview. And Siegel is doing everything he can to ensure that Germany’s bubbly representative at Eurovision this year does well. "Europe must have the feeling that the Germans are one hundred percent behind Lou," Siegel told the tabloid, Bild Zeitung.

"Childhood dream to sing for Germany"

The Munich-based Hoffner, who is a familiar face on the German popular music circuit, is ecstatic about finally making it to the Eurovision after narrowly missing a chance two years ago with another Siegel classic "Happy Birthday Party."

"It was always a childhood dream of mine, to sing for Germany once," she said. Born in a family, where singing was a part of life, Lou admitted to dpa that as a young girl she used to don her mother’s negligee, high-heeled platform shoes and croon into a wooden spoon in front of an imaginary audience.

She later discovered a weakness for hair color, experimenting with all hues before settling on her current flaming orange. The trained pharmacy assistant said she sang all the time and everywhere she could, even in her sister’s pizzeria and local beer tents. For the past 15 years, she’s been touring Germany and even abroad with her cover version band "Party Gang."

But it’s not just her voice that Lou has been training in preparation for the Grand Prix finals in Riga on Saturday. The 5 foot, 3 inches tall singer has also been spending serious time getting into shape. Lou says she’s lost 28 kilos in recent months and is giving her designer nightmares about getting her white tuxedo to fit her right for the big night.

And her yogic facial contortions aside, Lou also told the Bild Zeitung on Friday that she'd had a face-lift in a Munich cosmetic surgery clinic to get rid of lines on her forehead and around the eyes. "I'm so happy with my new face, I admit it because I now simply feel more beautiful," she said.

The singer is banking on her exuberant presence and the "warm feelings that her song evoke" to help her to success at the Eurovision. "There’s so much unhappiness all around us, we must stick together and be friendly and peaceful with each other, then everything will be okay, that’s also the message of my song," she gushed to journalists in Riga recently. "I’m just like my song, optimistic and happy." Whether all that ebullience will help this year’s German contestant to win hearts at the Eurovision remains to be seen.

It's Eurovision time again and this year's most controversial act is representing Russia. DW-WORLD takes a look at teen music sensation, t.A.T.u. (May 20, 2003)