Prominent German officials, including President Frank-Walter Steinmeier, held a ceremony to commemorate the victims of a racist attack in the city of Hanau. The victims' families are still seeking closure and justice.

German President Frank-Walter Steinmeier, along with other top officials, held an event on Friday commemorating the victims of a racist shooting in the city of Hanau, exactly one year since the attack took place. The attack, which targeted migrants of Middle Eastern and Asian descent at two shisha bars in the city near Frankfurt, left nine people dead, and shone a fierce spotlight on far-right extremism in Germany.

"Clarification and an accounting of the past are ... the responsibility of the state to the public and above all to the relatives," Steinmeier said in a speech to mark the event.

He acknowledged that mistakes had been made by authorities, saying he was "deeply depressed that our state has not been able to keep its promise of protection, security and freedom."

He called on the public not to "allow this evil act to divide us."

"Let us not overlook the evil forces in our midst — hatred, marginalization, indifference. But let us believe ... in our strength to stand together," Steinmeier said.

During the ceremony, the state premier of Hesse, Volker Bouffier, along with Hanau Mayor Claus Kaminsky, read aloud the names of the nine victims.

Heinrich Bedford-Strohm, the head of Germany's protestant church, said earlier in the day that Germans should remain vigilant against racism.

"We have almost forgotten again what happened back then," Strohm said in video remarks. "But the victims are still suffering to this day."

The gunman, 43-year-old Tobias R.*, killed his mother and then himself after carrying out the attack. He had expressed right-wing extremist beliefs towards ethnic minorities and conspiracy theories online before the assault.

Tobias R. published a 24-page manifesto online portraying his life story, with the killer also claiming that his mind was being controlled by a "secret service organization." He also shared racist views in the text, saying that people of certain African, Middle Eastern and Asian origins should be eradicated from Germany. 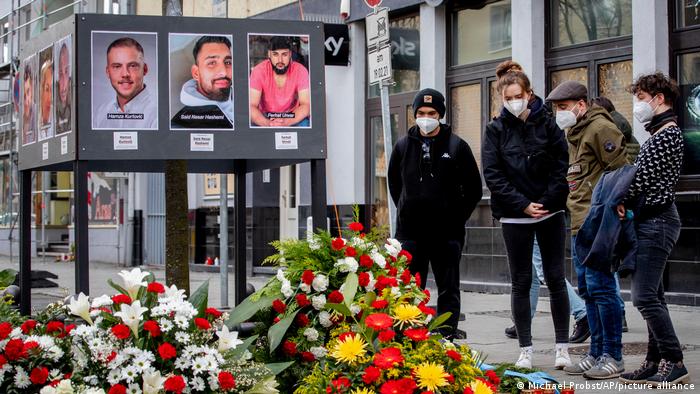 The killer lived with his parents in Hanau, and legally owned several weapons. The victims' families have alleged that his 73-year-old father knew beforehand about the attack and encouraged the assault.

The families have reportedly filed a criminal complaint against the gunman's father, according to the Süddeutsche Zeitung. They have also criticized the police response to the assault, saying the emergency number was busy on the night of the attack.

So far, 42 family members of the victims have received compensation from the federal government in connection with the attack, totaling 1.2 million euros ($1.5 million). The Ministry of Justice has pledged more compensation as needed.

German Foreign Minister Heiko Maas said on Thursday that the attack in Hanau was a foreseeable event, given the presence of right-wing extremists in Germany. Maas said more than 33,000 extremists lived in Germany, with 13,000 of them deemed by the authorities to be willing to use violence.

"Why aren't we all hearing alarm bells?" Maas asked. "And how can it be that the bereaved are still complaining about the disrespect and bureaucratic coldness they face from the authorities?" he added.

Maas said "everyday racism" in public spaces such as schools and government offices should be stamped out. He also slammed the far-right Alternative for Germany party (AfD), calling them "intellectual arsonists."

"Let us not leave racist agitation unchallenged in public and in our parliaments," Maas said, adding "we have to do everything we can to fight right-wing populists politically."

Right-wing groups in Germany are actively exploiting protests against pandemic restrictions to push their own agenda. DW met a woman who has been fighting right-wing extremism for decades and now worries about growing radicalization.