Prosecutors have said that the Hamburg knife attack suspect wanted to "kill as many Germans of Christian faith as possible" but was not a member of "IS". One person was killed and six wounded in the July assault. 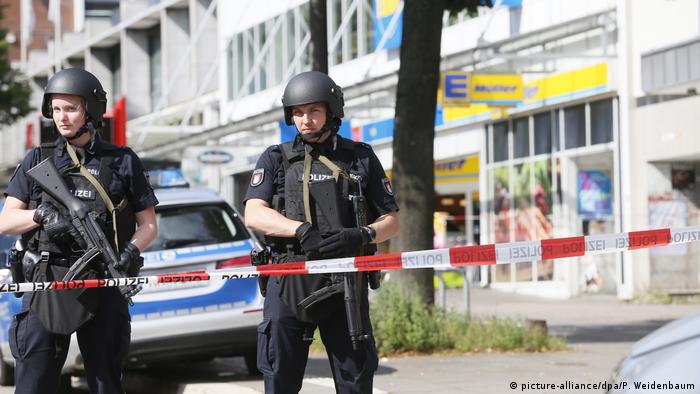 More than three months after a deadly knife attack at a supermarket in Hamburg, federal prosecutors charged a 26-year-old Palestinian asylum-seeker on Friday with one count of murder, six counts of attempted murder and six counts of grievous bodily harm.

The suspect, identified as Ahmad A., picked his victims at random but wanted to send a signal with the attack, according to investigators.

"It was important to him to kill as many German nationals of the Christian faith as possible. He wanted his actions to be viewed in the context of an Islamist attack, and understood as a contribution to jihad worldwide," prosecutors said in a statement.

Authorities said he wanted to "retaliate against people, who in his view represent perpetrators of injustice targeting Muslims." Ahmad A. cited tensions at the time over a contested Jerusalem holy site as his immediate motivation for carrying out the assault.

One person was killed and six others wounded in the July 28 attack. The suspect grabbed a knife with a 20-centimeter (7.9-inch) blade from a supermarket shelf and began attacking those around him. He was later overcome by passers-by and arrested.

Investigators did not find any evidence to suggest that Ahmad A. was a member of an extremist group or terrorist organization, including the so-called "Islamic State" (IS) group.

If convicted, the 26-year-old faces a life sentence, but Germany often grants parole after 15 years.

Ahmad A., who was born in the United Arab Emirates, came to Germany in 2015. He was slated to be deported after his asylum application was rejected by authorities, but the process was held up as he sought to secure new Palestinian identity papers.

Hamburg officials say the man was known to authorities as a suspected Islamic radical, but they said he had never been classified as a "threat." They also considered him to be psychologically unstable but believed he did not pose any immediate danger.

The attack in Hamburg was the first Islamist attack in Germany since Tunisian Anis Amri drove a truck into a crowded Christmas market in Berlin on December 19 last year, killing 12 and injuring 48.

Amri was also slated for deportation after his asylum application was rejected, but the process was held up by a lack of identity documents.