With their promotion rivals Heidenheim failing, Hamburg had a return to the Bundesliga in their grasp, but let it slip. It's the latest in a series of failures for one of Germany's most troubled clubs. 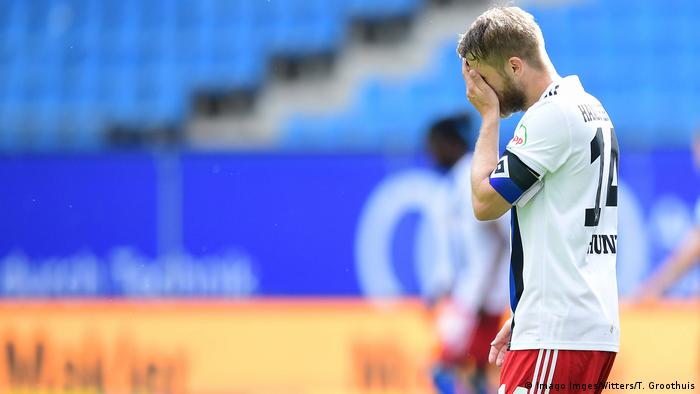 In the end, a draw would have been enough to set up a promotion playoff against northern rivals Werder Bremen. A draw at home to Sandhausen, a bottom-half club from a village in southwest Germany with a population of 15,000.

Surely that wasn't too much to ask from a squad with the third highest wage bill in the division, one greater than four Bundesliga clubs?

Evidently, it was. And the most damning part of Sunday's 5-1 defeat, described by the club's English Twitter account as "embarrassing",  is that it wasn't in the least surprising to anyone who has followed the fortunes of the once great Hamburger SV in recent years. To rub salt in the wound, the scorer of the fifth goal, Dennis Diekmeier, played for Hamburg for eight years and made 184 appearances without scoring.

The list of failures is long: The years of flirting with relegation from the Bundesliga finally culminating in a first ever drop into the second division, failure to secure promotion at the first attempt last season, humiliating home and away derby defeats to local rivals St. Pauli, disastrous late collapses against Fürth, Kiel and Stuttgart which saw Hamburg surrender second place, and a 95th-minute defeat to Heidenheim on the penultimate weekend, which meant that even the playoff spot was out of their hands going into the final day.

They needed help from afar from champions Bielefeld, and they got even got that, as Heidenheim lost 3-0. But they still couldn't do their own job, handing Heidenheim the playoff berth.

When HSV outsourced its professional football team into a limited company in 2014 – a process in German football known as "Ausgliederung" – fans were promised it would encourage levels of investment which would help the club establish itself among Europe's elite. Instead, the once unimaginable prospect of Hamburg spending a third season in the second division is a sad, pitiful and, in the eyes of many, thoroughly deserved reality.

And yet the season actually started relatively promisingly. Under Dieter Hecking, HSV lost only one of their first 11 games, fired six past Stuttgart and quickly established their position as heavyweights at the top of the table. Off the pitch, as well, the Bakery Jatta affair saw players, staff and fans pull together in support of the then 21-year-old who had been wrongly suspected of having incorrect documentation. HSV were showing their very best side and were well on track. But, as so often in recent years, it didn't last.

The blame game is back underway, but the list of candidates for the role of chief scapegoat is long. Players, coaches, sporting directors, chairmen and presidents have come and gone at a rate so dizzying in recent years that many in Hamburg have lost track.

Hecking and the hierarchy

Head coach Hecking arrived with a reputation for stability and authority, an elder statesman of German football management who has seen it all. But he's surely never seen anything like this, and wasn't blameless himself either. Hecking's tactical adaptability has been questioned, while a series of media interviews before Christmas in which he discussed his potential future plans suggested his focus wasn't entirely on the job at hand.

But should he even have been there in the first place? Hecking is widely considered to have been the choice of former sporting director Ralf Becker, not of the current, younger, incumbent Jonas Boldt, who had excelled as a progressive chief scout at Bayer Leverkusen. Boldt and Hecking are polar opposites in many ways but have been professional enough to work together, and the former has consistently backed the latter in public. But Boldt would surely have a different style of coach in mind.

Meanwhile, further up the hierarchy, Hamburg have stagnated in a self-perpetuating cycle of financial reliance on Klaus-Michael Kühne, the German businessman who has a 20.6 percent stake in HSV and whose associates dominate the boardroom. Kühne's influence appears to grow in tandem with the crisis, and the crises keep getting worse.

One only has to look at the fates of Kaiserslautern, who announced last week that they would be filing for insolvency in the third division, 1860 Munich and others to see what can happen to fallen German giants who find themselves trapped in a downward spiral of sporting failure, financial mismanagement and unrealistic expectations. Schalke could yet be next.

Hamburg fans have forgiven their club for a lot in recent years, but can they ever forgive them for this?

Bundesliga 2019-20: A strange season with the usual winners

Bayern Munich lifted the title once again, making it eight in a row. But, that aside, 2019-20 was far from an average season. DW has gathered reaction from fans, players, coaches and journalists to a historic campaign. (28.06.2020)