It seems strange to say of a forward who scored his first goal for six months, but Werder Bremen must build around Milot Rashica, says Matt Pearson. He was sensational as Bremen won 6-1 to keep hopes alive. 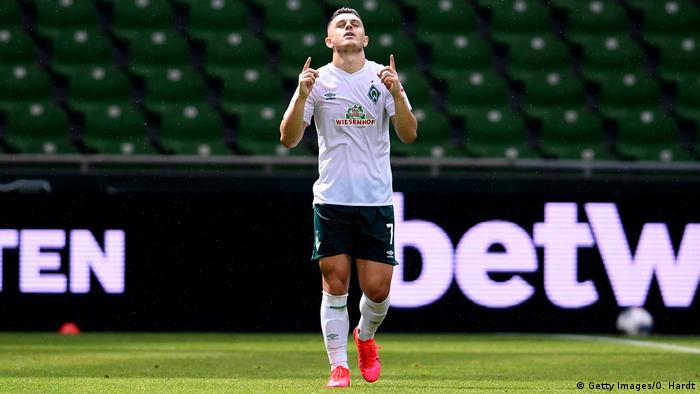 If there was a piece of play that summed up Milot Rashica's performance in his club's biggest game of the season, it wasn't his eye-catching early solo strike but the moment he managed to flick a pass through to Josh Sargent while on the turf surrounded by defenders.

The American striker latched on to the ball and chipped over the keeper for Bremen's sixth of the day, further confirming that their great escape remains alive. They will play either rivals Hamburg or Heidenheim in the relegation playoff.

In itself, the goal had little meaning. But the fact that it came moments after Rashica's wayward pass led to Cologne's consolation was further demonstration of the mix of determination and skill that has made the 23-year-old such a hot property. RB Leipzig and a host of Premier League clubs are supposedly interested in luring him away from Bremen.

But it was far from the only one; he struck the post twice, drifted inside to torture Cologne's defenders with direct runs and never stopped working despite the heat. And all that despite not being 100% fit.

Much as they have with coach Florian Kohfeldt, Bremen have been patient with Rashica this season. He started the campaign in great form with seven goals and three assists in his first 11 games but hadn't scored in 2020. That dip in form has hurt Bremen badly. They've often looked toothless and blunt in the final third. But not on Saturday.

Though Cologne were obliging opponents, a performance of similar intensity from Rashica and Bremen would make them difficult to beat in the playoff. But even if they do pull off a great escape, one that looked unthinkable a few weeks ago, they cannot allow their best player to leave if they are to progress.

Players of Rashica's quality are rare in the bottom half of the Bundesliga and with money short for all but the biggest beasts, lucrative offers are hard to resist. But this season must serve as a warning to Werder that quality counts, and delivers when it really matters.

Neither Fortuna Düsseldorf, who allowed Bremen to breathe another day with a limp performance at Union Berlin, nor Paderborn, relegated two weeks ago, can boast a player of such ability or potential.

He's not the only one at Werder. Davy Klaassen, Maximilian Eggestein and Jiri Pavlenka are all too good to be stranded at the foot of the table while Kohfeldt was named coach of the year only last season. Rashica is the man that can make the difference though. He's the player that can worry even the best defenders and turn games on his own.

Bremen's faith in their young boss now looks to have paid off, but if they're to avoid cementing a reputation as a club that floats around mid-table with the odd relegation battle thrown in, they need to show ambition.

Of course, Rashica's wishes will play a part in all this and there can be little doubt he'll want out should they fall in the playoff which, given their season so far, can't be ruled out.

But this is a player of rare talent, albeit one who must become more consistent. A player whose energy, work rate and skill can spur on the rest of his team. Bremen's first priority must, of course, be staying up. Keeping hold of Rashica should be second on the list.