Palestinian Islamist group Hamas has altered its three-decade-old charter, softening its tone somewhat while rejecting negotiations with Israel. Israel has accused Hamas of attempting to fool the world. 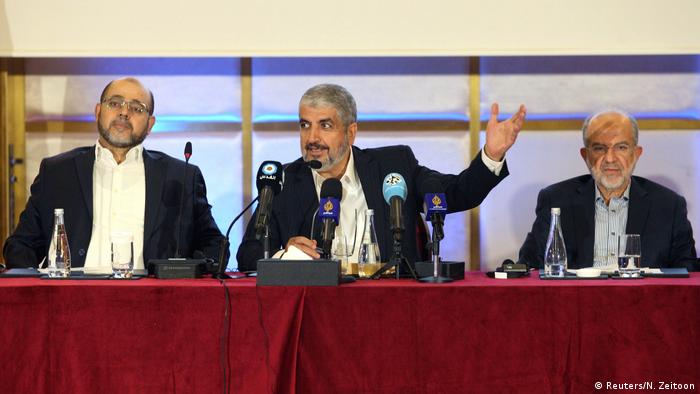 The Palestinian Islamist group Hamas unveiled new policies on Monday supporting the creation of the Palestinian state in the West Bank and Gaza Strip within the 1967 borders. It rejected, however, ever recognizing Israel.

The release of a six-page document of general principles and policies, the product of two of internal deliberations, was announced in Doha, Qatar in a bid to moderate Hamas' three-decade old charter in the hopes of gaining greater international legitimacy.

"We wanted to present a document that truly reflects Hamas' ideology and consensus and to present it to our supporters ... and the international community," said Khaled Mashaal, the exiled leader of Hamas.

In a somewhat softer tone, Hamas dropped its wording of "destroying" Israel - for now - and said it would recognize a Palestinian state within the borders crated by the 1967 Arab-Israeli war.

"Hamas rejects any alternative to the full and complete liberation of Palestine, from the river to the sea," it said, referring to the Jordan River and Mediterranean Sea.

"However, without compromising its rejection of the Zionist entity and without relinquishing any Palestinian rights, Hamas considers the establishment of a fully sovereign and independent Palestinian state, with Jerusalem as its capital along the lines of the 4th of June 1967, with the return of the refugees and the displaced to their homes from which they were expelled, to be a formula of national consensus."

Unlike its 1988 charter which referred to jihad against Jews, the new document says Hamas is not in conflict with Jews because of their religion but rather against "the Zionist project."

Labeled a terrorist organization by the West and Israel, Hamas said it would continue armed resistance as a legitimate right. It also said it would not recognize the Oslo Accords.

Is the two-state solution doomed?

Hamas, which governs in the Gaza Strip, is also trying to reach out to Egypt and other Gulf Arab states who consider the Muslim Brotherhood a terrorist organization.

Hamas officials said they had no "administrative or organizational relationship" with the Muslim Brotherhood.

Israel and Egypt have imposed a crippling blockade on Gaza since Hamas kicked out its main rival, the West Bank-based Fatah faction of Palestinian President Mahmoud Abbas, from the strip in 2007, a year after Hamas won Palestinian elections.

Relations between the two main Palestinian sides remain tense. The release of the document comes as Abbas is set to meet US President Donald Trump next week.

Unsurprisingly, Israel was not impressed by Hamas' new document.

"Hamas is attempting to fool the world, but it will not succeed," said David Keyes, a spokesman for Israeli Prime Minister Benjamin Netanyahu.

"They dig terror tunnels and have launched thousands upon thousands of missiles at Israeli civilians," he said. "This is the real Hamas."

Israel has made operational a medium-range missile inceptor, completing a multi-layer missile shield. The David's Sling, Iron Dome and Arrow systems can defend against threats from Hezbollah, Hamas, Syria and Iran. (02.04.2017)