The only functioning power plant in the Palestinian territory is out of action after running out of fuel. The local electricity company blamed a "dispute" between Hamas and the Palestinian Authority for the outage. 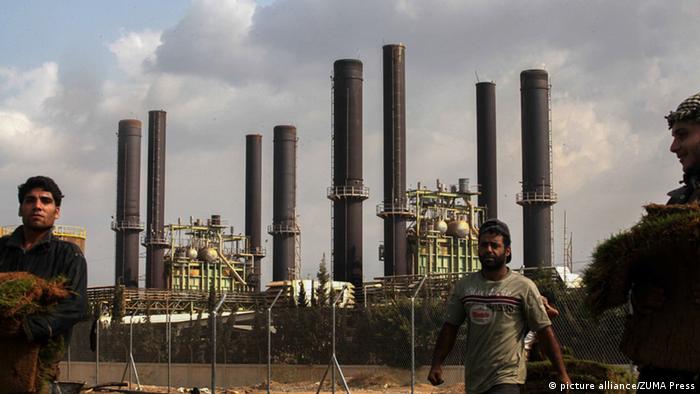 Gaza residents on Sunday had their electricity cut from eight hours a day to just six, after the only power station in the Gaza Strip stopped operating.

The two factions have been involved in a bitter dispute over tax bills on fuel imports amid a long-running border blockade by Israel and Egypt that has worsened power shortages.

The head of the energy provider, Samir Metir, said that all the plant's fuel, purchased in January with funding from Qatar and Turkey, had been used up.

The United Nations is to trim its work in the Palestinian territory after Hamas partially closed Gaza's Erez foot crossing. A search of Gaza continues after the mysterious murder of a senior Hamas military figure. (31.03.2017)

Police put an end to a demonstration by Gaza residents to demand more than four hours of electricity per day. The restive region between Egypt and Israel has continued to deteriorate since Hamas took over 10 years ago. (13.01.2017)

Turkey has resumed its aid delivery to the Palestinian territory. The move comes some six years after a deadly altercation at sea caused a rupture in diplomatic ties between Turkey and Israel. (04.07.2016)

The two countries stepped in earlier this year after the coastal Palestinian territory saw its worst power shortage in years, when electricity was cut to just three hours a day during a cold winter.

Metir said it was not clear when the Palestinian territory would receive more power.

The latest closure means Gaza's roughly 2 million residents will have to rely on electricity supplied by Israel and Egypt.

According to international groups, 80 per cent of the Gaza population lives on humanitarian aid, and more than half is impoverished.

More than two-thirds of households don't pay their electricity bills, in part because they can't afford it, according to the "Times of Israel."

The Maan news agency cited a Palestinian government spokesman as accusing Hamas of collecting millions of shekels from Gaza residents for electricity without forwarding the payments.

The Gaza Health Ministry warned that there could be serious repercussions for health services due to the power outage. There are also fears that drinking water supplies will be affected.

Israel has responded to rocket attacks from Gaza with airstrikes, as a month of deadly violence in Israel and the Palestinian territories continues to escalate.