More than half a million poultry in Germany have been killed since the latest outbreak of highly contagious bird flu. Disease experts warn of the risk that a human pandemic is possible. 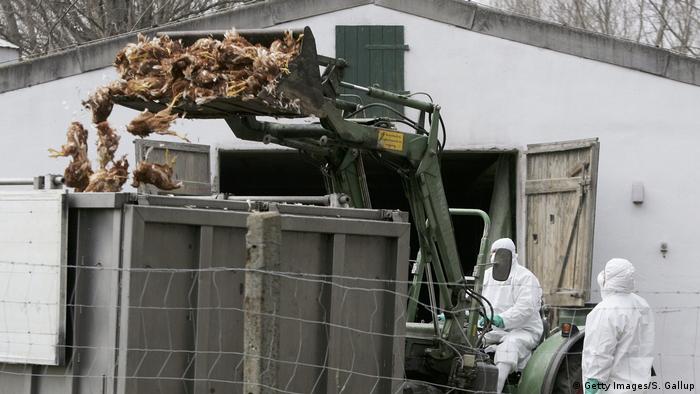 Some 391,000 poultry determined to have been exposed to bird flu have been killed and another 154,000 culled as a precaution since the latest outbreak of the highly contagious virus hit Germany last November, according to government numbers obtained by the "Rheinische Post."

Nearly 40 countries in Europe, Asia and Africa have reported outbreaks of various strains of avian flu in poultry or wild birds since November, according to the World Health Organization (WHO).  Fifteen countries in Europe have been hit by the highly pathogenic avian virus, including France, Hungary and Belgium.

In Europe, millions of poultry have been culled and preventative confinement measures implemented in an effort to stop the virus from spreading. The mass culling has taken a toll on farmers and increased the price of poultry-based foods in some countries.

There are usually two or three bird flu strains recorded at one time, but now there are at least a half a dozen strains active in the past months. They include H5N1, H5N2, H5N8 and H7N8.

While virus strains found in Germany and Europe - H5N5 and H5N8 - are not known to pass onto humans, the number of different strains, the global spread and the sheer number of birds infected raises the risk of viruses mixing and mutating, disease experts warn.

The Organization for Animal Health has warned the number of concurrent outbreaks in birds are "a global public health concern." Last month, WHO's director-general, Margaret Chan, said "the rapidly expanding geographical distribution of these outbreaks and the number of virus strains currently co-circulating have put WHO on high alert."

The strain has cause hundreds of deaths and resulted in millions of birds being culled.

Disease experts warn that if it were to mutate to gain easy human-to-human transmission capability there could be a global pandemic.

In China, more than two dozen people have died so far this winter after multiple outbreaks of H7N9.

According to WHO, most people are believed to contract the strain by coming into close contact with infected poultry or entering contaminated areas. It is not believed to spread between humans. Some 900 people in China are believed to have been infected with H7N9 since it emerged in 2013.

A new bird flu sub-type has been found on a turkey farm in Steinburg in the northern state of Schleswig-Holstein in north Germany. There have been no recorded cases of H5N5 spreading to humans. (24.01.2017)

Kenya and Rwanda have banned poultry products from Uganda after a confirmed outbreak of bird flu. Ugandan authorities detected the virus after a mass die-off of birds on the shores of Lake Victoria. (17.01.2017)