Gun control protests across the US demand action from Congress

The "Recess Rallies" are calling on Congress to end the country's hundreds of mass shootings every year. House Democrats plan to end the summer break early to begin work on gun legislation. 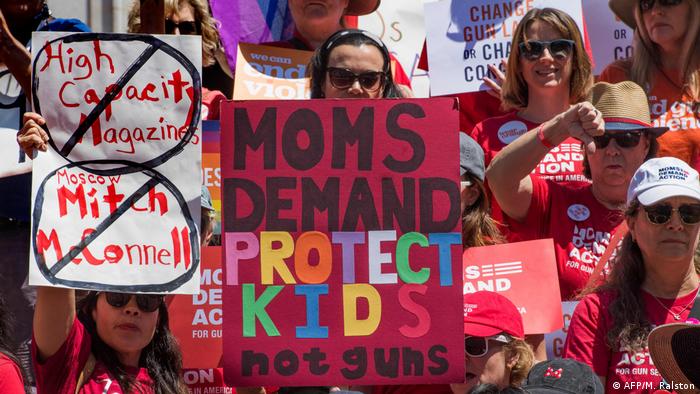 Rallies calling on lawmakers to tighten gun control were held on Saturday across the US, in response to recent mass shootings in El Paso, Texas; Dayton, Ohio; and Gilroy, California.

Protesters carrying signs like "Disarm hate" and "Change gun laws or change Congress" took to the streets in several major cities including San Francisco and Baltimore.

The demonstrations were called "Recess Rallies" because the US Congress has not yet returned from summer recess. However, Democrats on the House Judiciary Committee have said that they will come back to work early to start preparing gun violence legislation.

Republican Senate Majority Leader Mitch McConnell, who has long resisted such legislation, even as the US sees hundreds of mass shootings every year, has signaled that he wants to make reviewing gun bills a Senate priority when it is back in session.

The House of Representatives has already approved a draft law that expands background checks on individuals seeking to purchase guns, but it must be approved by the Senate.

The idea of "red flag" laws has also begun to gain traction, which would allow authorities to confiscate weapons from people thought to be at risk of violent behavior.

In early August, back-to-back shootings in El Paso and Dayton left 31 people dead, days after three died at a food festival in California. The attacker in El Paso is believed to have purposely sought out the border city for its large immigrant population, after being fueled by the hateful and racist rhetoric that has flourished, especially on the internet, emboldened by the xenophobic comments of President Donald Trump.

So far this year, 246 people have died and 979 have been injured in mass shootings in the US.

At least three people have reportedly been killed in a shooting at a major food festival in California. Police say the suspected gunman has been shot dead. (29.07.2019)

The vote by the Democratic-majority House was a direct response to recent mass shootings in the US. The bill has little chance of progressing in the Senate because of Republican opposition.