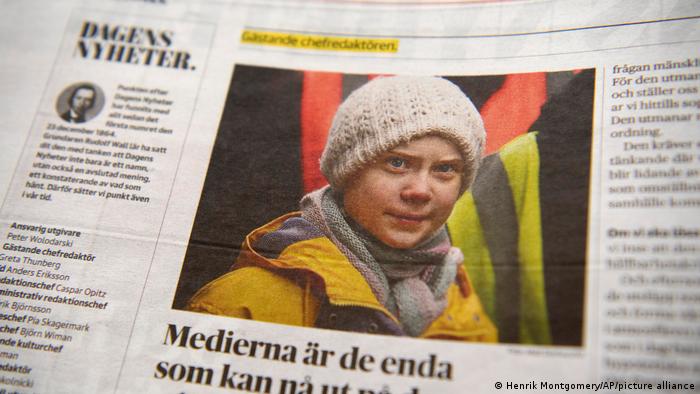 The teen activist and leader of the Fridays for Future youth movement used her one-day tenure at the paper to highlight climate-related articles and some of her own writing.

Thunberg has often criticized mainstream media outlets for failing to give the necessary attention to the climate change crisis. But earlier this year she met with the staff of Dagens Nyheter and engaged with them on the topic.

After the meeting and responding to feedback from its own readers, editor-in-chief Peter Wolodarski decided to give Thunberg the editorial space for one day to highlight the topic.

"Handing over responsibility for Sweden's largest daily newspaper to a minor, an uneducated activist is completely incomprehensible. It's crazy. If it were not for the absurd fact that we are in an existential crisis that is still ignored by our society," Thunberg wrote in an editorial.

Wolodarski and Thunberg distributed the cover of the issue via Twitter, which had the headline "These are facts, not opinions," along with a large photo of a crater in Siberia, where the permafrost is melting.

Thunberg's edition will feature articles such as that of a village in Russia's Arctic at the shores of the Barents Sea, where the ice has disappeared.

In the arts and culture section, Thunberg engages in a conversation with Sir David Attenborough, a famous British naturalist, on raising awareness about climate change. The section also features a commentary by acclaimed author Margaret Atwood.

Thunberg used her editorial capacity in a limited way, she said on Twitter. But she did register her thoughts on the matter in Sunday's edition, stating that the climate crisis is the most difficult and the most challenging problem that humanity has ever confronted.

She said she hoped that democracy and education could be the mechanisms with which to engage and solve the crisis.

Thunberg's takeover is not her first. A year ago, she was invited to be guest editor for a day at British broadcaster BBC's Radio 4.

But not all media outlets are open to such an endeavor. Anna Careborg, editor-in-chief of DagensNyheter's Stockholm rival, Svenska Dagbladet, criticized the initiative, saying that it risked blurring the line between news and opinion journalism.