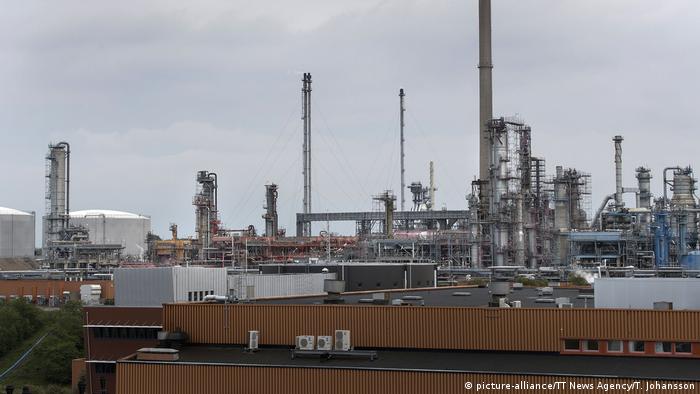 The DPA news agency reported that three of the activists had scaled harbor cranes at the plant located near the western city of Lysekil.

Greenpeace said the six were nationals of Finland, Norway and Sweden, and were trained and equipped for scaling industrial objects.

On Thursday and Friday, the environmental group's ship Rainbow Warrior had anchored offshore, blocking one tanker's arrival as well as two departures.

Broadcaster SVT reported that late Friday that a tanker was eventually able to leave after Greenpeace said its protest vessel had relocated "some distance away."

Conservationists, back in 1975, had vigorously opposed the refinery's opening on Sweden's rugged western coast.

Opposing expansion are the Greens, junior members of Lofven's coalition.

Preem says its plan is to upgrade heavy oil to sulfur-free gasoline and diesel, but Greenpeace says Sweden must uphold the UN's 2015 deal to avert climate change, saying the expansion will lift emissions by a million tons of carbon dioxide yearly.

Read more: Vanessa Nakate: 'Many people are not yet aware of the dangers of climate change'

"Lofven must choose the Paris agreement over the oil industry's short-term profits and deny the expansion of Preemraff in Lysekil," said Greenpeace Sweden's spokeswoman Isadora Wronski.

Lysekil is a town across narrow waters leading to the Brofjorden refinery, about 120 kilometers (74 miles) north of Gothenburg.

Sweden's environmental court of appeal approved the project in June, but the final decision rests with the government.

Second stunt of the week

EU imports of beef, palm oil and soya make it "complicit" for 10% of deforestation in the Amazon and other ecosystems, argues Greenpeace, which hopes shoppers will use their clout.

Also on Friday, Reuters said it had sighted a European Commission document proposing that by 2030 the EU cut its net greenhouse gases by at least 55% compared to levels in 1990.

Already, the bloc aims for 40% cut by 2030. A higher target would cement its intent to become a global leader in curbing catastrophic climate change.

The tougher target is to be proposed this coming week, with the 27-nation bloc split over how ambitious it should be.

Global utility companies have been slow to go green, undermining efforts to tackle climate change, according to a new report. But that may be changing.