Flight shaming is working, but will Europe′s railways buckle under the strain? | Business | Economy and finance news from a German perspective | DW | 27.01.2020 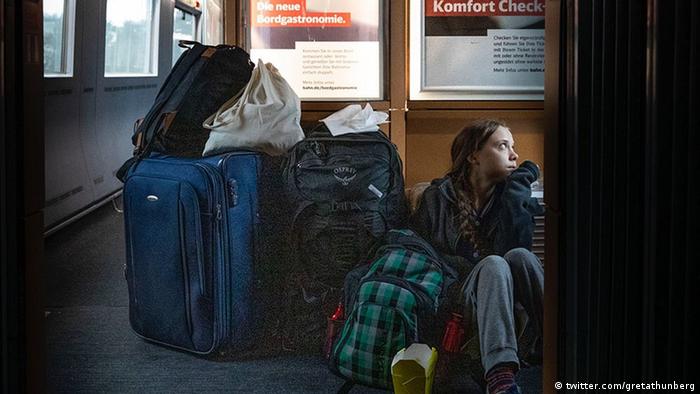 Environmental groups welcomed a 4% annual drop in people flying via airports in Sweden, where the concept of flight shaming or Flygskam was born. Germany, too, saw a 0.4% decline in air traffic last year; domestic air travel fell more steeply — down almost 2%. But the German airports association, ADV, blames economic, not environmental reasons.

Germany's national rail operator Deutsche Bahn (DB), on the other hand, is seeing record numbers of long-distance rail travelers. In the first half of 2019, it carried 71.8 million longer-haul passengers and expects that figure to have reached 150 million for the whole of last year.

Flight shaming has been tacitly welcomed by policymakers and many media commentators, who promote train travel as a more sustainable form of transport, despite decades of underinvestment in Europe's rail networks and much lower passenger approval rates on lateness, overcrowding and cancellations than for airlines.

And while most people agree that the public's addiction to flying has to be tackled — after all, air travel is the most individually polluting form of transportation —  many are loathe to acknowledge that our rail systems are ill-prepared to welcome an onslaught of new passengers.

Germany's 33,000 kilometers (20,500 miles) of railways, for example, have suffered from decades of inadequate financing and those monies injected have failed to renew the aging network or improve reliability. Last year, DB set a new record for delays and cancellations — one-in-four of DB's high-speed services ran late — and the firm was pressured to appoint a punctuality tsar to try to repair its reputation. It seems flight shaming, and the accompanying "train-bragging" that travelers are being urged to post to social media, are a little premature.

"The investment needed now to bring the railway network up to speed is likely to present a real challenge [to politicians],  Stefan Gössling, a professor of sustainable tourism at Sweden's Lund University told DW. He added that the €86 billion ($95 billion) earmarked by the government for DB "is just laughable, it's not anywhere near enough."

"What is urgently needed is a capacity increase, which is difficult because many cities already face limits in the number of trains they can handle," Gössling added. He called for the railway network to be upgraded so that passengers can travel from any German city to another at least once per hour. That would help meet the target of doubling the number of passengers carried by 2030.

Agreeing that Germany needs to widen its rail "bottlenecks" Joachim Holstein from the rail campaign group Back on Track, called for DB to identify lines that are currently underutilized: "We know that Frankfurt Central Station is a problem and that some other regions only have two tracks instead of four in each direction," he told DW. "But there are several lines where you could easily add one or two more trains per hour."

Holstein acknowledged that any major upgrade of the rail network could take five to 10 years to become a reality. DB has also announced plans to introduce a new generation of high-speed trains, raising the fleet size from 460 to 600, but they are unlikely to come into service for another five to six years.

Ministers, meanwhile, have urged patience as the modernization program is likely to lead to more delays, not fewer, and DB has pushed back its goal of 82% punctuality to 2025 while the upgrading proceeds. So, any meaningful reduction in flying is unlikely to come soon.

Britain has a similar underinvestment problem, Despite privatizing its rail network 25 years ago, much of its infrastructure and rolling stock of trains is outdated, meaning a third of trains run late, if at all, and are often overcrowded. Competition among 28 rail operators means there are several complicated ticketing systems to traverse, compared with flights that can be bought with just a few clicks.

Ticket prices in the UK rise annually linked to inflation, which has led to some of the highest rail fares in Europe, despite woeful punctuality rates. Budget airlines, on the other hand, continue to offer one-way flights to the sun for less than 10 pounds (€12, $13), with Ryanair boasting that more than 90% of its services arrive on time.

France, on the other hand, has been widely praised for its high-speed TGV network, and last year, the government announced plans for five new lines. Switzerland and Austria are also singled out for their huge investments in rail, which have ensured reliable services with good connections.

If rail is to make a serious dent in demand for air travel, greater interconnectivity between European cities will be critical, which analysts say will require European Union intervention. After all, national rail operators have little incentive to open up their infrastructure to foreign competition. Incompatible rail tracks between neighboring systems also remain an issue, 215 years after the train was invented.

DB has meanwhile been chided for winding down its intra-European night train or sleeper services in 2016. Austria's state-run rail operator ÖBB took up the slack and now runs 27-night trains. This month, ÖBB restarted its overnight service from Vienna to Brussels, and next plans to extend its offering to Amsterdam.

Back on Track's Holstein, whose group aims to increase European cross-border rail traffic and the expansion of night trains, says he wants to see 5-10% of fliers become night train users.

The group is due to meet members of the European Parliament this week to push for an expansion of the night train network, better cooperation between railway companies and for a common European ticketing system to simplify the fare structure.

Faced with the onslaught of flight shaming, the aviation industry has pointed out that air travel is responsible for up to 2.8% of global carbon dioxide (CO2) emissions, while road transport accounts for almost a quarter. They say that even if air travel were eventually curtailed by half, the impact on the overall figure, and climate change, would be negligible.

Shame may not be the most efficient fuel to spur action against climate change, says DW's Kate Ferguson after attending Germany's first national aviation conference in the eastern city of Leipzig. (30.08.2019)