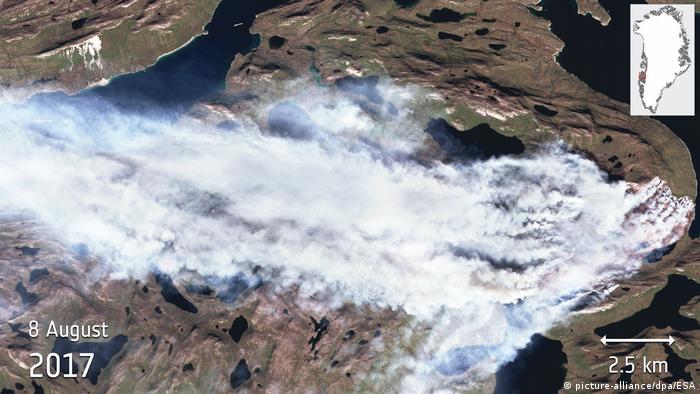 Greenland, the vast Arctic island with the biggest permanent ice sheet outside Antarctica, is burning.

Since late July, wildfires have raged across an ever-larger area of the landmass - and with greater intensity - than ever before observed.

Experts say it is too early to draw firm conclusions linking the fire to climate change because no long-term data is available to put the blaze in context. However, unusually warm and dry conditions this year could have been a factor.

"It's unprecedented in the short 18-year observational record," Jason Box, a climate scientist at the Geological Survey of Denmark and Greenland, told DW. "We also know that temperatures in Greenland are probably higher [than they have been over] the last 800 years."

Although the origin of the blaze is unclear - with lightening and a stray cigarette as possible suspects - what is clear is how it has been spreading across remote areas of grassland and low shrub.

Greenland conjures images of white, frozen expanses. But Box says global warming means it's getting greener all the time. "There's a shorter snow-cover season, and that allows the plant life to expand," he explained.

The Arctic is heating up around twice as fast as the global average. At the same time, rainfall around the world is also increasing - and that trend as well is more present in the Artic.

"More rain is a widespread symptom of climate change," Box said. "You get more precipitation - and where you get the biggest increase is in the Arctic."

For Greenland, warmer, wetter conditions mean more vegetation - which, seemingly paradoxically, could be a factor for the fire. 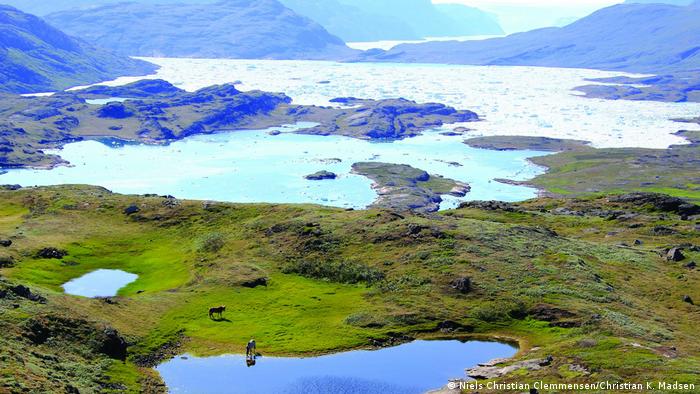 "It's growing more, and so there's just more that can burn," Box said. "We should expect more of these types of fires."

And living plants may not be all that's fueling the fire.

Scientist suspect the fact it's kept smoldering for more than two weeks means it's consuming peat - a dense, carbon-rich accumulation of decayed vegetable matter that builds up over thousands of years.

Stef Lhermitte, a scientist at the Delft University department of geoscience and remote sensing in the Netherlands, was among the first to draw attention to blaze, revealed by NASA satellite data.

He says the relatively small scale of the blaze - compared to recent wildfires in Russia and British Colombia, for example - means emissions released from this ancient carbon sink will probably not have a major impact on greenhouse gas emissions by themselves.

In terms of longer-term conclusions, "it's now up to the scientific community to delve deeper," Lhermitte told DW.

Field research into the affected area, and a wider look at the causes and impacts of the fire, could enhance our picture of how climate change is affecting the Arctic.

"One interesting question is: Are these fires really the result of climate change, and will they be bigger in the future? Secondly, what will be the impact of these fires on the ice sheet and surrounding areas," Lhermitte said.

One possible impact of the fire is that the resulting soot may settle on the ice, making it darker and thus reducing its reflection of heat from the sun.

Box is among a group of scientists behind the Dark Snow project, which is investigating exactly this phenomenon: how soot, mineral dust and microbes are speeding up the Arctic melt.

"Preliminary results are consistent with some other publications, which confirm that fire can enhance melt," Box said. "So that's a multiplier in climate change." 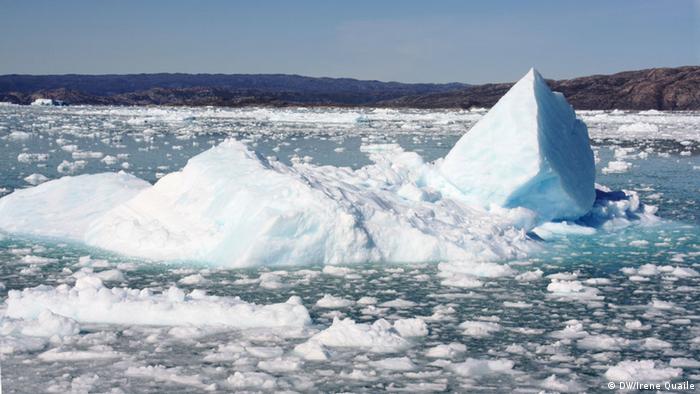 Box and his team are planning to gather snow-core data in Greenland next year. "We hope that we can fingerprint these fires, to [confirm] that these fires are enhancing melt - that's the hypothesis we're testing," he told DW.

The total footprint of the fire extends over 18 square kilometers - some of which has now stopped burning, leaving isolated patches smoldering.

Local authorities said they hope rainfall forecast for this week would help further contain the blaze.

So far, the biggest problem for local people and wildlife has been heavy smoke - which has reportedly driven animals like reindeer and musk ox out of the area, and disrupted the annual reindeer hunting season.

Tourists have also been warned to stay away from a popular hiking trail.

According to a new study, the world's oceans are rising almost three times as fast as they were 25 years ago. Scientists say coastal regions face a much greater risk than previously thought. (24.05.2017)

A view over our changing poles

With its operation IceBridge, NASA is currently conducting research flights over the Arctic to monitor ice loss. The photos are spectacular - and worrisome. (07.04.2017)

No vertebrate lives as long as the Greenland shark, a new study says. But this Methuselah of the animal kingdom is still quite puzzling. Do they really only reach sexual maturity at age 150? (12.08.2016)