Thanks to Portugal's high sun exposure, the nation has the potential to produce green hydrogen for Europe. The EU-backed Green Flamingo initiative may enable it to ship the green gas from the port of Sines to Rotterdam. 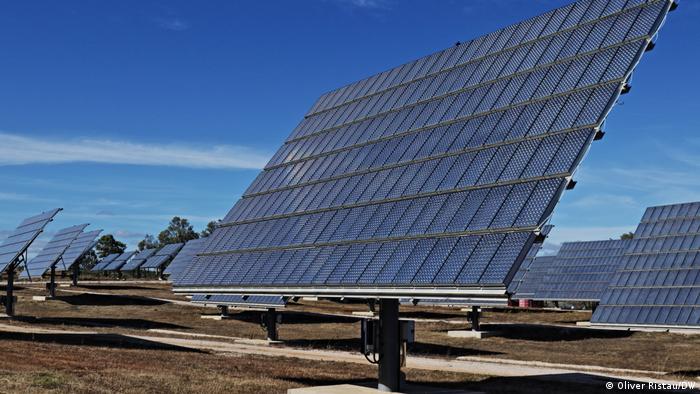 It's quiet around this solar farm in the back country of Portugal's Algarve region. Once in a while there's a creaking sound when the large solar mirrors readjust to the position of the sun. Sergio dos Santos hardly ever needs to interfere as the adjustment modules are automatically controlled.

Thus he finds enough time to tend his sheep, which graze in between the huge solar collectors on this 42-hectare (103-acre) piece of land, at least in spring when there are lush meadows, he says.

In the fall, the soil is still dry following a hot summer. In this warm area in Portugal's south, solar irradiance reaches 1,900 kilowatt-hours (kWh) per square meter. By comparison, in northern Germany it's only 1,000 kWh per square meter. Dos Santos is responsible for the safety of the 4-megawatt Enercoutim solar farm near the small town of Martim Longo.

Marc Rechter is CEO and co-founder of Enercoutim, and his ambitions are high. His company Resilient Group is pursuing a huge hydrogen production project. He wants to help Portugal build up a 1,000 megawatt capacity by using solar power to split water into oxygen and hydrogen through electrolysis. The project is called Green Flamingo.

The Dutchman has advised the governments in The Hague and Lisbon on this technology. The Netherlands and Portugal have only recently signed a green-hydrogen cooperation agreement. As a first measure, Rotterdam and Sines have agreed that the green gas would be shipped to the Netherlands using both local ports.

From Rotterdam, it may eventually also be shipped on to German consumers via the Rhine River. Hydrogen production will be made possible by an electrolysis facility near Sines with a desired capacity of 1,000 megawatts, using domestic solar power. 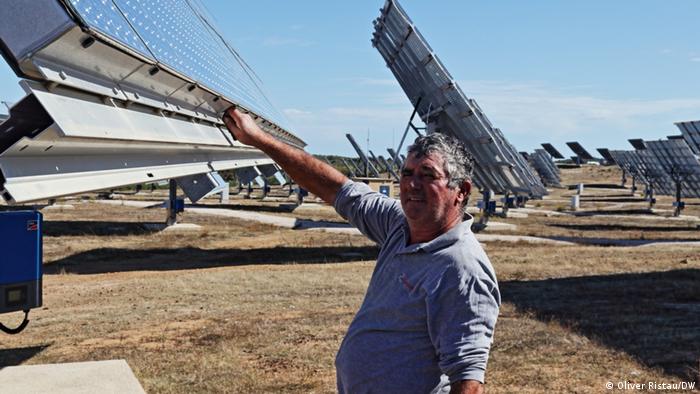 The European Union is supporting the project. Green Flamingo is one of several initiatives aimed at helping Brussels meet its new climate protection and energy safety objectives. The bloc's hydrogen strategy as presented in July of this year involves creating an additional electrolysis capacity of 40,000 megawatts by 2030. Several projects are named after a color and an animal.

When it comes to importing green hydrogen, countries such as Germany have traditionally set their eyes on northern Africa. According to Christoph Hebling from the Fraunhofer Institute for Solar Energy Systems (ISE), that's an important option, but another one would be "to consider Portugal and Spain because of their attractive solar irradiance conditions," he told DW.

Solar power for a song

Portugal can be credited for its low prices. A photovoltaic (PV) capacity auction in the summer registered a final price of 1.1 eurocents per KWh, showing the most favorable result across the whole of Europe. Such a low price level wouldn't be required at all, though, given current electricity prices of around 4 cents per kWh.

"With a solar power price of 1 cent per kWh, electricity producers hardly earn any money," Rechter told DW. "Instead, they're putting pressure on suppliers and researchers — that's unhealthy because we need to set up our own green-hydrogen and PV industry in Europe so as not to be completely dependent on supplies from China and other [non-EU] nations."

Cheap solar power is also a prerequisite for delivering an adequate supply of water. The electrolysis process consumes about 6 liters (1.6 gallons) of water per 1 cubic meter of hydrogen. Since the use of valuable drinking water is ruled out, producers have to resort to the Atlantic Ocean and desalination technology. The required desalination plants could keep costs at bay if powered by solar energy.

Big opportunity for Portugal and others

Rechter expects the initial costs for electrolyzers to drop very fast. He reckons that by 2030 a country like Portugal will be in a position to produce green hydrogen in a competitive way without losing out to producers of grey hydrogen (made from natural gas) or blue hydrogen (made from carbon). Hence Rechter warns that "investments in blue hydrogen threaten to result in total loss as green hydrogen can soon be made cheaper."

He adds policymakers are called upon to pave the way for hydrogen to be used in transportation and the gas network. Portugal's hydrogen strategy for instance includes building hydrogen fuel stations and making fuel cell buses like those produced by domestic company Caetano in cooperation with Toyota. In addition, the share of hydrogen used in the national gas network is to rise to 15% by 2030, up from just 1% at the moment. In 10 years, Portugal's electrolysis capacity is set to reach 2,000 megawatts.

In the meantime, work on the construction of the first mega electrolyzer is continuing unabated in the port of Sines. It's set to become operational in 2023. "Europe really has to get going to make sure we have a competitive industry by 2030," Rechter said. For coronavirus-crisis-hit nations like Portugal, it's a huge opportunity.