Greece's parliament has passed a budget for 2015 that projects economic growth and a reduced deficit. As lawmakers voted, anti-austerity demonstrators protested outside. 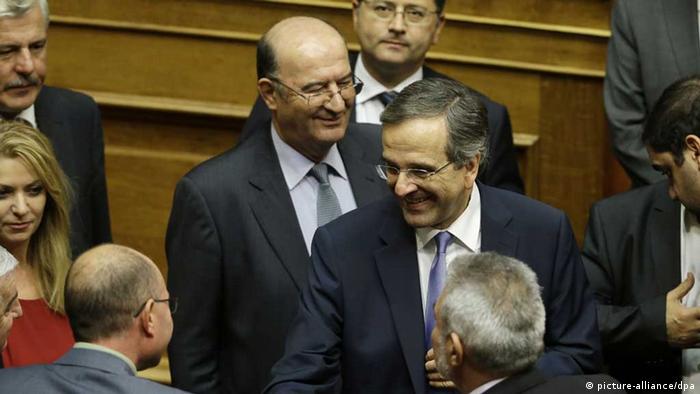 Lawmakers in the Athens parliament approved the government's proposed budget by a vote of 155 to 134 early on Monday.

The budget forecasts a growth rate of 2.9 percent in 2015 as well as a deficit of just 0.2 percent of gross domestic product, down from 1.3 percent this year.

Prior to the vote, Prime Minister Antonis Samaras hailed the budget as a sign that Greece was approaching an end to "an era of forced bailouts."

However, the budget and the forecasts it's based upon appear to have been met with little approval beyond the ranks of the Greek government.

Greece's "troika" of creditors- the European Commission, European Central Bank, and International Monetary Fund, which have bankrolled financial bailout packages for Greece for the past few years have said the forecasts in particular are too optimistic for an economy that shrank by 25 percent since 2008.

They estimated that Greece would post a deficit close to three percent of GDP in 2015 and urged Samaras and his government to pursue a fresh austerity drive to bring down that figure.

The troika has already provided Greece with 240 billion euros ($295 billion) in international bailout funds since 2010 and Athens is currently awaiting the next tranche of aid. This won't come, though, unless Greece can convince eurozone finance ministers about the accuracy of its figures.

"I am confident that we will soon arrive at an agreement" with the troika, Finance Minister Ghikas Hardouvelis told parliament during the debate.

"Our differences with the calculations of the troika are much reduced," he added.

Criticism from unions and opposition

The budget was viewed critically not only by the troika but also Greek unions and the opposition.

"The budget would lead Greeks into greater deprivation and would increase poverty," Greek Public Servants Union ADEDY said in a statement released prior to the vote.

"This budget guarantees five more years of austerity," SYRIZA leader Alexis Tsipras said during the parliamentary debate that preceded the approval of the budget.

Included in the budget is the continuations of around 50 billion euros worth of tax hikes and government spending cuts adopted three years ago in an effort to wrestle down the country's massive public debt.

Greece has come to a standstill after tens of thousands of workers took to the streets in a 24-hour nationwide strike. New austerity policies and tax raids have ignited further discontent among the Greek population. (27.11.2014)

The Greek government and its international creditors have reached a deal allowing the pay-out of the next and final tranche of the country’s massive bailout. Athens says the payment doesn’t entail more austerity. (18.03.2014)