Taking advantage of the sudden shift to working from home, Greece wants to offer a big tax break to get remote workers to move there. It is the latest play from an EU underdog trying to make the most of the pandemic. 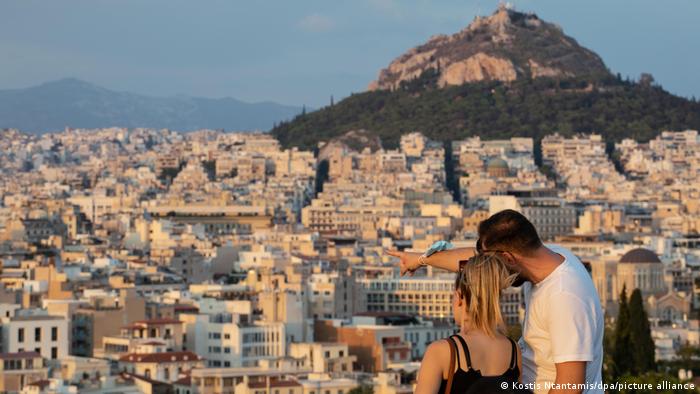 Almost a year into a pandemic that has brought travel to a near halt, many have resigned themselves to lying on the couch scrolling through photos of past holidays in the sun until carefree travel is once again possible.

In the meantime, popular vacation destination Greece has an interesting workaround: move there.

The government of the sunny Mediterranean country has plans to offer an income tax cut of 50% to professionals who move to Greece in 2021.

The EU member state hopes to capitalize on the rise in remote working brought about by the pandemic. The project ties together the appeal that has made Greece a tourism hotspot to the country's ambitions to diversify its economy into the digital sphere.

Read more: Do we need a right to work from home?

"Technology allows us to choose where we live and work," Alex Patelis, economic adviser to Prime Minister Kyriakos Mitsotaksi, told reporters at an unveiling of the plan in November. "Besides the sun, the country can now offer tax incentives too."

The current tax rate in Greece is 44% for annual earnings over €40,000 ($47,000). Under the proposed scheme, the rate would drop to 22% for seven years. The proposal will go to the Greek parliament before the end of the year.

The center-right government hopes the move will attract digital migrants, people who relocate to Greece while continuing to work remotely for a company or clients in other countries. The offer would be available to any person, Greek or non-Greek, who moves their residency to Greece in 2021. They must not have been a Greek tax resident in the past seven years.

The tax initiative aims to counteract the drain of professional talent that came about during a decade-long sovereign debt crisis that shrunk Greece's economic output by 25% and saw around 800,000 Greeks leave their homeland.

While the tax break would be available to all occupations and income levels, Mitsotakis's government hopes the move will attract independent finance and IT professionals. This would lay the groundwork for Greece to shift away from its dependency on tourism, an industry whose vulnerabilities were exposed when the pandemic hindered travel. Overall, Greek tourism revenues fell 78% in the first nine months of 2020, according to data from the Bank of Greece.

"The new incentives are being introduced at the right time, not only because they coincide with the imminent Brexit, but also as they come at a time when the focus of new foreign direct investment in Greece is shifting toward R&D, whether this is in the form of clinical trials for the pharma industry or software development and data processing & analysis," Angelos Benos, tax partner at accounting firm PwC Greece, told DW.

The plus side of a pandemic

"Greece's favorable climate and low property prices in comparison with other European countries, as well as the relatively successful management of the coronavirus pandemic have laid the groundwork for this," said Alternate Minister for Fiscal Policy Theodoros Skylakakis in November.

At the start of the coronavirus outbreak, Greece was much quicker than many of its neighbors to impose a lockdown, and an extensive media campaign encouraging people to stay home also helped. In the spring, Greece had just a fraction of the virus cases and deaths seen in Spain and nearby Italy.

The country is riding that momentum through the pandemic. Greece is capitalizing on the moment to make what Maria Demertzis, deputy director at the economic think tank Bruegel, called "incredible leaps" in improving IT infrastructure to be on par with other developed economies. During the first lockdown, dozens of public services that required in-person visits were moved online seemingly overnight. This rapid digitalization has continued.

Greece plays to its strengths

Demertzis said she hopes the government will make use of the latest rounds of EU funding to build on recent improvements to digitalization and to renewable energy, another clever pivot for a nation blessed with sun and wind.

"The mindset of Greece now is 'Where is our advantage and how can we capitalize on that?'" she told DW. "You see that they're looking to carve a space for themselves in the global economy depending on their strengths."

There is also hope that a rebranding will lure back some of the hundreds of thousands of Greeks who left. Some have already taken advantage of the shift to working from home to return to a country that offers them a good quality of life. "Many Greeks that left, quite frankly, are really unhappy about leaving," said Demertzis.

"Currently, Greece is not competitive at attracting senior executives who will operate regional or functional roles locally, as the high taxation rates have been a real blocker," said Benos. PwC business clients both Greek and international have shown favorable interest in the new legislation, he said.

Read more: Is a tax on people working from home justified?

The idea for the tax incentive was reportedly developed after certain banks signaled interest in expanding locations in Greece once the UK leaves the EU. Both US tech giant Microsoft and German carmaker Volkswagen have also announced plans to invest in Greece.

Having put up with a lot of bad press over the years, Greece seems committed to turning its luck around, even if that means leaning into a pandemic.

"I am optimistic about the fact that the government is thinking outside the box to try new solutions. You can try many things and some of them will stick," said Demertzis, who is Greek herself. "They're saying: 'How can we exploit the opportunity that was given to us by the shutdown?' And that's good. That's new and dynamic."