Greece's prime minister has ruled out seeking aid from Russia as he seeks better financial bailout terms. Both he and his finance minister are on a tour of European capitals but, so far, Berlin is not among them. 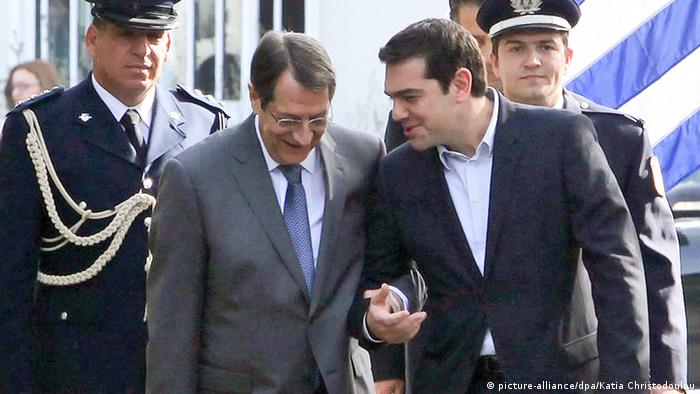 Prime Minister Alexis Tsipras on Monday made his first official trip abroad since taking office a week ago, meeting with his Greek Cypriot counterpart, Nicos Anastasiades in Nicosia. This is to be followed by stops in Rome, Paris and Brussels between now and Wednesday, as he seeks to build support for his left-led government's anti-austerity course.

In Cyprus, Tsipras was visiting a country with which Greece not only has close ties, but has also struggled to implement austerity measures to meet the term of its own bailout package. He used the visit to pitch his plan for economic recovery, centered on negotiating new terms of its 240-billion-euro ($270 billion) bailout to make it easier to pay back what it owes, telling a press conference that this was necessary to create growth in Greece's economy.

"Europe is in crisis, not just Greece and Cyprus... Europe then should take brave decisions so that the growth agenda returns," Tsipras said.

He also called for an end to the current system of supervision of EU countries receiving bailouts, under which they are subject to regular compliance reviews from economists from their creditors, the European Union, the European Central Bank and the International Monetary Fund.

"It's been accepted that this mechanism doesn't have legal institutional status at a European level," Tsipras said.

Both Tsipras and his finance minister, Yanis Varoufakis, who was in London on Monday, have said they will no longer work with the so-called troika of lenders, but want to negotiate directly with the creditors.

"We are in substantial negotiations with our partners in Europe and those that have lent to us. We have obligations towards them," Tsipras said.

Asked whether his government could turn to Russia for aid, after it suggested it would be open to a request from Athens, Tsipras ruled out the possibility.

"Right now, there are no other thoughts on the table," he said.

The new Greek government also received a positive signal from Brussels on Monday, as a spokesman for European Commission President Jean-Claude Juncker confirmed that he supported a change to the troika mission.

Asked about a report to this effect in Germany's Handelsblatt newspaper on Monday, Juncker's spokesman confirmed that he supported a change, but said that so far, no specific plans existed.

Berlin not on the itinerary

As both Tsipras and Varoufakis continued their charm-offensive tour of European capitals on Monday, Berlin remained notably absent from their itineraries. This may have something to do with the fact that the government of Europe's biggest economy could be the most difficult to convince to relax the terms of Greece's bailout.

Christiane Wirtz, spokesperson for Chancellor Angela Merkel told reporters in Berlin on Monday that the German government saw "no cause to depart from this proven mechanism" (the troika).

"There is the willingness and interest in friendly and good relations with the Greek government," she said. "Nonetheless the German government is sure to stick with its broad positions on the euro question."

The euroskpetic AfD (Alternative for Germany) party has wrapped up its party conference in Bremen. Party founder Bernd Lucke finished by thanking Greece's new government for "showing things can't go on like this." (01.02.2015)

Prime Minister Alexis Tsipras has expressed hope that Greece and its creditors will reach an agreement on the debt issue. The new leftist premier has vowed to pay off debts and said he will not act unilaterally. (31.01.2015)