Greek Prime Minister Alexis Tsipras has arrived in Cyprus. The visit to one of Greece's closest allies is the beginning of a diplomatic offensive to gain support for his economic policies shortly after coming to power. 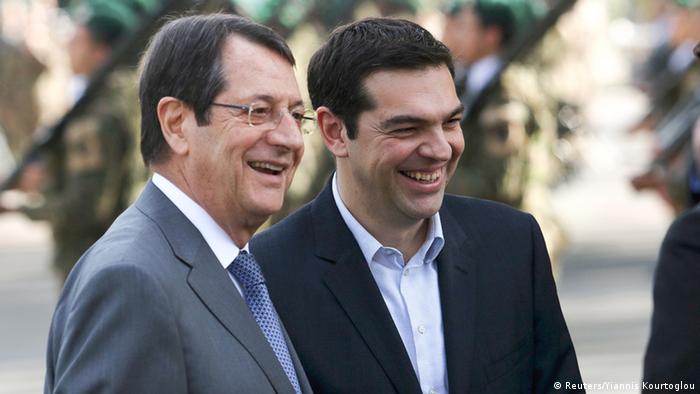 Greece's new prime minister arrived in Nicosia on Monday. This is his first trip abroad after his leftist Syriza party won the polls last month.

"Cyprus is always in our minds and hearts," Tsipras said in a brief statement during a welcoming ceremony at the presidential palace in the Cypriot capital.

The two countries, which shared the same language and culture, were trying to coordinate their policies within the European Union and express their dissatisfaction with the EU's policies regarding Russia - a major economic partner for both Athens and Nicosia.

Historically, Greece was been a strong supporter of Nicosia in its standoff with Turkey, which supports the separatist Turkish Cypriots in the North.

Meanwhile, Greek Finance Minister Yanis Varoufakis met his British counterpart George Osborne in London on Monday, where he said he wanted to reach a new debt deal to end his country's loan dependence. Osborne welcomed Varoufakis, saying that the two countries would discuss "the stability of the European economy and how to boost its growth."

On his stop in Paris before arriving in London on Sunday, Varoufakis appealed for French support. The Greek minister said his "government was all about ending this addiction [to loans]."

Greece received a 240 billion-euro ($270 billion) loan from the International Monetary Fund, the European Union and the European Central Bank in 2010.

Prime Minister Tsipras said he did not intend to default on the IMF and European Central Bank loans, but his government's proposal to set out a timetable for a revised debt agreement has met with strong opposition, especially from Germany.